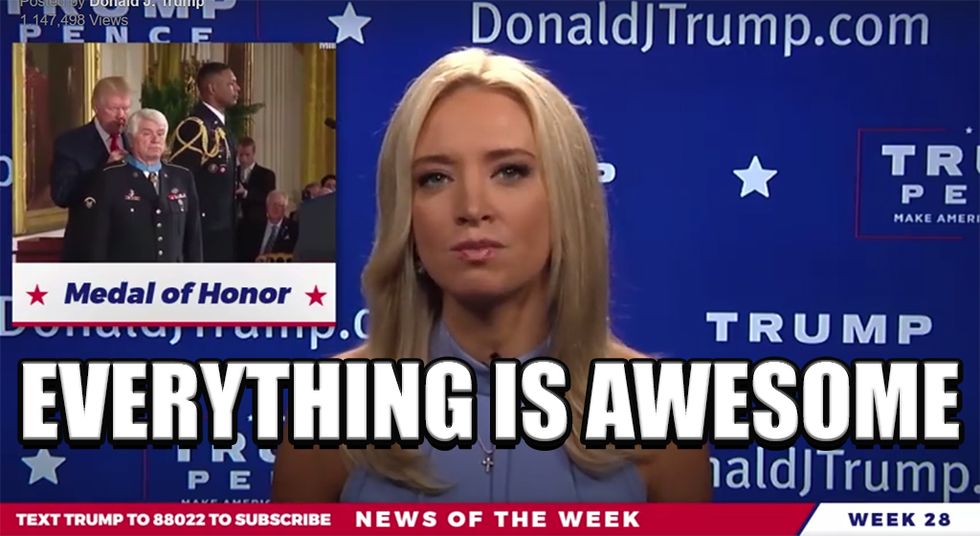 When Trump talking head Kayleigh McEnany announced she had abruptly left CNN on Saturday, nobody really cared (except maybe Van Jones). As one of the more vocal Trump mouthpieces CNN threw up to make the other pundits seem like adults, the Twitter-verse speculated that maybe she had been "You're Fired," or perhaps would find a home where she belongs, at Fox News, you know, the place with the guy with the dick pics and the lying.

[wonkbar]<a href="http://www.wonkette.com/621079/lara-trump-doin-propaganda-shit-for-the-facebooks-totally-normal-ish"></a>[/wonkbar]But then on Sunday, Trump's Facebook page posted one of its "Real News" propaganda videos, except instead of watching Eric Trump's wife slip deeper into Stockholm Syndrome, we were greeted by McEnany, wearing her trademark (chemically induced?) shit-eating grin.

[wonkbar]<a href="http://www.wonkette.com/620118/oh-go-fuck-yourself-kayleigh-mcenany"></a>[/wonkbar]Spare yourself the cruel and unusual 90 seconds of punishment, and just know it's bad. The whole thing was designed to make it look like an actual newscast. There's a scrolling ticker at the bottom that tells you to subscribe to more Trump-speak social media garbage, and some YouTubing Trump idiot figured out how add a little box to play the appropriate b-roll. The script sounds like it was written by an illiterate junior varsity football team that just met the ghost of Goebbels. McEnany herself looks like she's been tied to a chair to keep her from flailing her arms and signaling for help, and she blinks so much we're wondering if she's giving us a secret message.

McEnany boasts about the July jobs report, the RAISE act (which is never ever going to be law), and Trump giving a Vietnam vet a medal. As this is coming from President Trump's Ministry Of Truth, it conveniently leaves out that Trump got a medical deferment (bone spurs!)! during Vietnam, Trump is still taking credit for Obama's handiwork on the jobs front, and that the RAISE Act just fucks over immigrants so lazy white people can feel better about themselves. (And will never become law.)

That this level of mind-fuckery is generally reserved for political despots and authoritarian regimes was not lost on many scholars and nerds:

This is what what Trump's America looks like. Idiots like Kayleigh McEnany (who is, TO BE CLEAR, a Harvard Law graduate being PAID TO BE AN IDIOT) telling you things are great because Dear Leader has decreed from his glass palace. The Opposing Party is lying to make you feel sad, but as long as you eat your Trump TV dinners while watching your Trump-approved TV shows, the only thing you have to worry about is which cast member Trump will vote off the island this week.

Wonkette salaries are fully funded by loving readers like you! If you love us, click below to fund us!