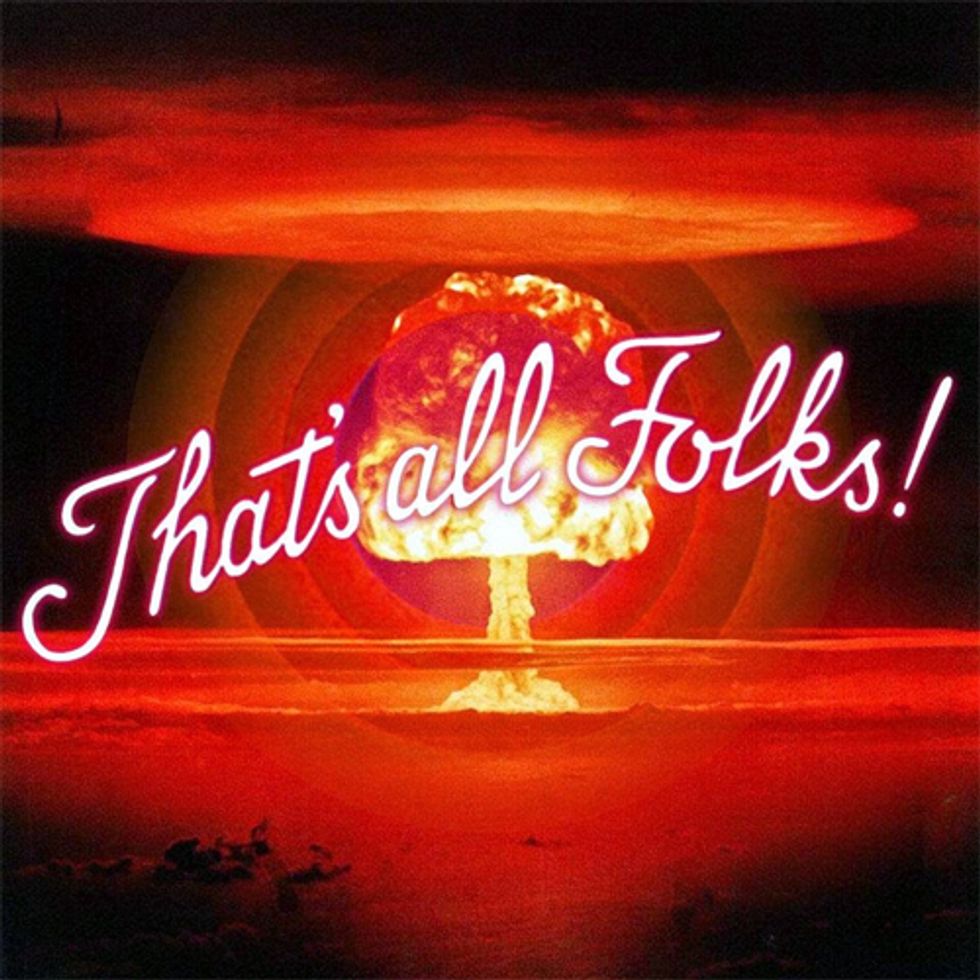 Fresh off being named Donald Trump's senior adviser and lickspittle, Kellyanne Conway visited The Rachel Maddow Show Thursday night, where she lied for nearly a full hour, interrupted only by commercials for luxury automobiles and digestive remedies. Maddow was prepared, and did a fine job of herding Conway back to the question, which Conway then refused to or was unable to answer. Her boss, the guy who's soon going to have control of the nuclear codes, Tweeted some thoughts earlier Thursday about America's nuclear stockpiles, which every president since the end of the Cold War has sought to reduce. Here's the Tweet:

Why Can't Man-Baby Donald Trump Use Nuclear Weapons, WHY WHY WHY??? A Wonksplainer

Trump reportedly asked a foreign policy expert THREE TIMES IN ONE HOUR why he's not allowed to nuke everything. THREE TIMES.

No biggie, let's just re-arm, because if we've got 'em, why not use 'em? It's worth your while to head over to MSNBC and watch the whole thing, depending on how well your own digestion holds up. For now, let's watch the fun as Kellyanne Conway can't even begin to make sense of what Trump might have meant, other than the most obvious meaning of what he actually said, which sure sounded like he wants to build lots of beautiful new bombs. Heavens, no, says Conway again and again, he just wants Peace Through Strength!

Maddow reminded Conway that for decades now, the U.S. has been working to reduce the number of nuclear weapons held both by our military and the Russians, and to stop nuclear proliferation, then got to the seeming reversal of policy signaled in the not-yet-president's tweet:

Conway: He’s not necessarily saying that --

Then Conway went off on a tangent that explained perfectly what Trump was getting at, at least perhaps if you have an English-to Swahili-to-woodchuck-to-Martian-to English translator installed:

Conway: I mean, this is what happens. When you say that terrorism, particularly ISIS, radical Islamic terrorists, are being contained, are the JV team, you don't have to worry about them anymore, and then people are being killed in Nice, in Berlin this week, certainly in Orlando at the nightclub in May, in San Bernardino a year ago, in Paris, in Brussels, it doesn't ring true to anybody that they're not advancing, it doesn't ring true to anybody --

Maddow: What does that have to do with nuclear weapons?

Conway: Its -- I'm gonna give you the analogy. Just saying it doesn't make it true. In other words, us saying they're contained and then them attacking proves, that proves to everybody who feels unsafe in a world where terrorists, and particularly in the case of ISIS, are advancing, that they're still willing to do their harm. So us, he's trying to, in his, I think in his quest to keep us safe and secure, he's putting the world on notice that he will do what he thinks he needs to do to keep us safe and secure.

Maddow: By expanding our nuclear capability? I mean --

Conway: He's not trying to change a policy through Twitter, and he's not trying to project what he will do as president. What he's merely saying is that, you know, this is a man who gets his intelligence briefings regularly, the PDB, presidential daily briefing, refers to a product, but in addition to that, which we know he received today or yesterday, he's also has other intelligence sources, and he's learning many different facts, which I am not privy to, and this is one of the responses he felt compelled to give, based on those facts.

Maddow: Do you feel confident that the president-elect understands what we've got for a nuclear arsenal now?

Bet you're as reassured as we are, now! Oh, we should probably note that Conway's wrong about ISIS -- while they are encouraging foreign supporters to commit attacks like the one in Berlin, they really are losing territory in Iraq and Syria.

Donald Trump doesn't need intelligence briefings, since it's all just the same blah blah blah all the time, and he has rallies to hold.

Conway never actually got around to any of the specifics, but she had a fine time talking around the questions, and insisting that Donald Trump is not instituting a new policy while we still have a president in office (he totally is). At least Conway was honest enough to admit she has no idea who has the most nukes in the world, so that was refreshing, as was her very quick recovery: "But I'm sure he does." Well of course he knows, because he is, like, a smart person.