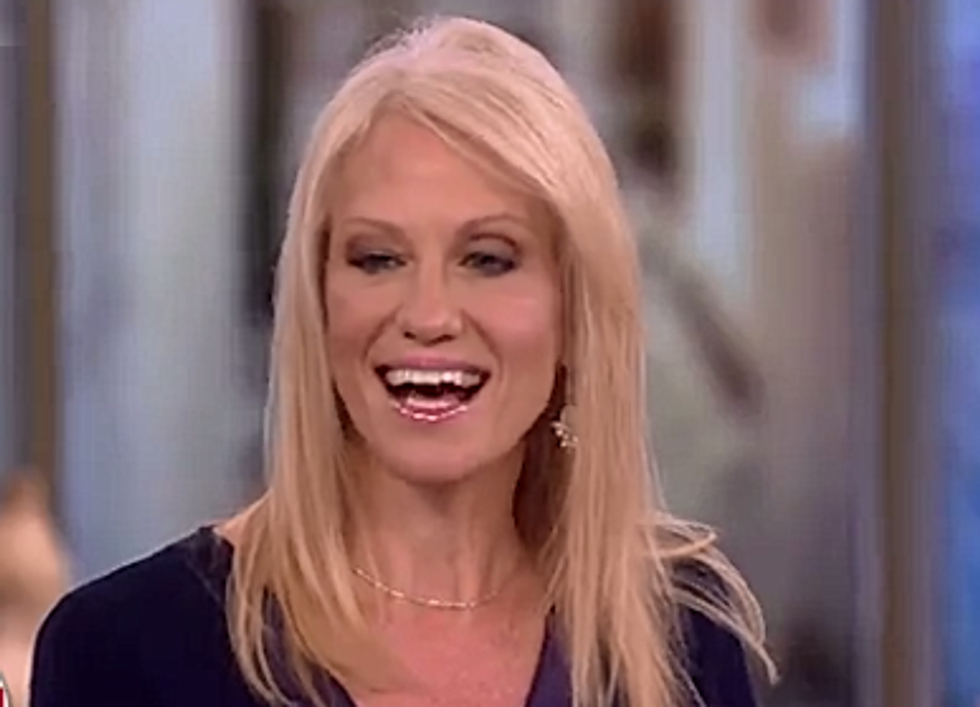 This is Mika's SPLAIN YOURSELF face.

While you were all still enjoying your Thanksgiving weekend, Kellyanne Conway, Donald Trump's former "campaign manager" and current "?????", was having a #mad on the CNN about the horrifying prospect of Trump nominating mean man and brain-haver Mitt Romney to head up the State Department. Romney was so very terrible to Trump during the campaign, saying that if Trump won, "the prospects for a safe and prosperous future are greatly diminished," and that "a business genius he is not." He even said that on foreign policy matters, Trump is REAL dumb. What a truthful and unkind man! He should go back up his car elevator and never be mean to Trump ever again!

On CNN, Conway said people "feel betrayed" by the idea of a Secretary Of State Mittens, and that she's "all for party unity," but "not sure that we have to pay for that with the Secretary of State position." She would like Rudy Giuliani or some other Trump butt-licker to be secretary of State, please.

Two sources at the top of the Trump transition team confirm to MSNBC that they spoke to the president-elect today, and that Donald Trump was quote "furious" at Kellyanne Conway's comments on Sunday, suggesting Trump betrayed his supporters by even considering Mitt Romney for a position in his cabinet.

"Kellyanne went rogue at Donald Trump's expense at the worst possible time," a source familiar with Trump's thinking said. Trump's top aides said they were quote "baffled" by Conway's comments, and suggested that it feeds into a growing concern inside the campaign that quote, "instead of driving Donald Trump's message, she's pushing her own agenda." One top transition aide said, quote, "it's dangerous." Steve Bannon and Reince Priebus have reportedly been growing frustrated by Kellyanne's failure to become a team player in a transition process where the top players are forming a tight-knit group around the president-elect.

After Mika B. read all that, sometimes Trump advisor Joe Scarborough said it was "extraordinarily undisciplined" that this is coming out of the transition team. Douche-gobble Mark Halperin noted that Newt Gingrich and Mike Huckabee have also spoken out against Romney, and Scarborough responded by pointing out that those dick-knobs ain't been given jobs in the Trump campaign, and moreover, "Kellyanne doesn't have a job yet, and she's angry about that," which is why she is lashing out. ZING MEOW, where is one million pounds of popcorn? We need some if we're going to keep watching this!

Well, guess who was watching her "Morning Joe" this morning? Kellyanne Conway, of course! She was OUTRAGED that everybody was being so sexist at her, by saying it's wildly inappropriate for her to be out there yelling about Romney in public. Who is being sexist? The Trump transition leakers who said Donald's all pissed off? Joe Scarborough? Mika Brzezinski, for reading the words on the television? Stop sexism-ing Kellyanne right now, Mika!

Check out the "Morning Joe" kids, as they were getting pissed off text messages from Conway this morning:

Conway responds to #morningjoe report on Trump campaign's reaction to her Romney comments. The panel weighs in. https://t.co/hTs91LLfgb

JOE: We have a response from Kellyanne Conway, who says about our reporting this morning, it is "sexist." She says she can have any job she wants. [...] I'm not sure how that reporting is "sexist" because those were sources at the top of the campaign [...] Is she suggesting that the people that she's working with, the three people at the top of the Trump transition campaign, are sexist? Because that's where all this sourcing comes from, the people closest to Donald Trump ...

Mark Halperin helped out by saying if Reince Priebus did what Conway's been doing, he'd get called on it, and said about Priebus, "As best I know, he's not a woman." AS BEST HE KNOWS. Mark Halperin is a #journalist, and is thus unprepared to confirm or deny rumors that Reince Priebus is a chick.

So what's all this about? We dunno. Are they all really doing sexism to Kellyanne Conway? We're having a hard time seeing it, unless what she's secretly trying to communicate is that Steve Bannon and Priebus and Trump are a trio of misogynistic crap-whistles, in which case WHOA IF TRUE.

This pissing contest, between Conway and Morning Mika, has been going on a few days. She tweeted on Thanksgiving morning about how "Trump loyalists" are worried about Romney at State. Then she spent some time fighting with Scarborough on Sunday, over his suggestions that her public complaining about Romney was real effin' unprofessional, as is Giuliani's public lobbying for the State position:

Buncha loons. All of 'em.

The only thing that makes us feel better about a Trump presidency is that these knuckleheads' collective incompetence may outweigh their capacity for evil by a mile, in which case America might halfway survive their regime.