Kellyanne Conway Not Certain Microwave Is Listening To Her, BUT MAYBE IT IS 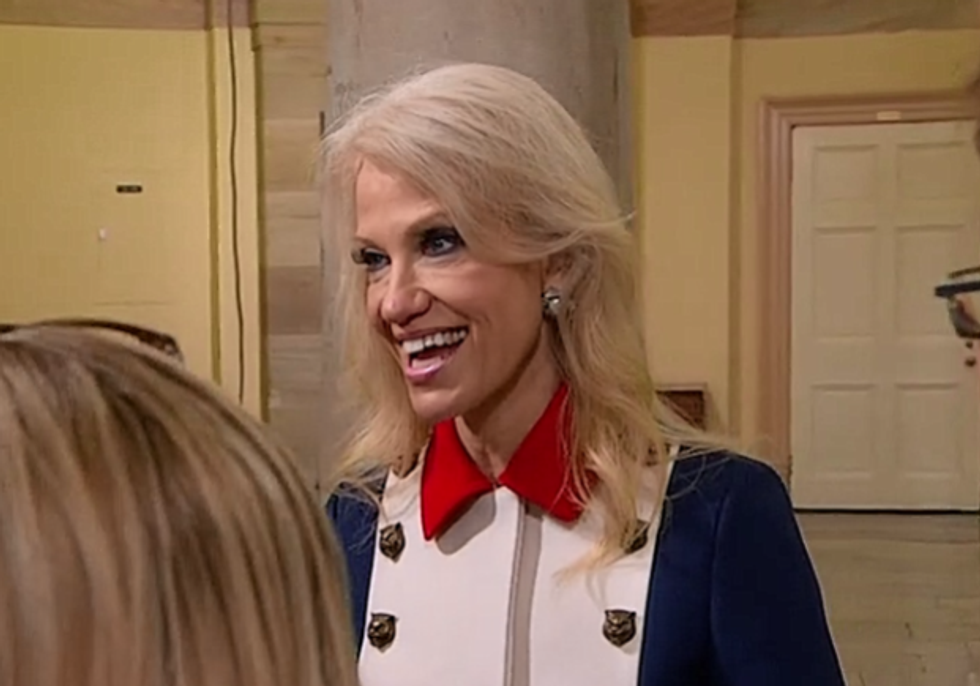 Donald Trump apparently let Kellyanne Conway out of her cage again, and once released, she immediately explained that maybe her microwave is recording her. Yes, really, this is what we are telling you about. Do we need a big set up here, or can we just say she was talking about Trump's bullshit thing about Obama doing a "wire tapp" to him and dive right in? Yeah let's go:

“What I can say is there are many ways to surveil each other now, unfortunately,” including “microwaves that turn into cameras, et cetera,” Conway told New Jersey’s The Record newspaper in an interview Sunday. “So we know that that is just a fact of modern life.”

Kellyanne Conway's Hot Pockets are recording her. That is a thing that is happening.

Also, George Snuffleupagus asked Conway on ABC if she had any evidence to back up Donald Trump's allegations that Barack Obama did a "wire tapp" to him, and this was her reply:

"I have no evidence but that's why there's an investigation in Congress."—Kellyanne Conway on Trump's wiretap claims pic.twitter.com/erE71Gg4vd

No, of course I don't have any EVIDENCE for those allegations, and that answer has nothing to do with what the president said last week.

Except for it kind of does? Anyway, Kellyanne Conway is very glad Congress is investigating the thing Donald Trump found in his rancid asshole, that there is no evidence for, because that is how democracy works.

We literally have nothing to add to this, except to ask what ELSE that Donald Trump loves is being wire tapped by Obama? Is the pussy he grabs full of Obama "wire tapps"? What about stairs, which the "president" finds very frightening? Are they bugged? Does Ivanka have a "wire tapp" in her body, because we know Trump looks at that a whole lot?

Anyway, the House Intelligence Committee has set a deadline of TODAY for Trump's Justice Department to either put up or shut up with his claims Obama did a "wire tapp" to him, and John McCain has said there's literally no "there" there, and the main idea is that Trump has nothing, so fuck him.