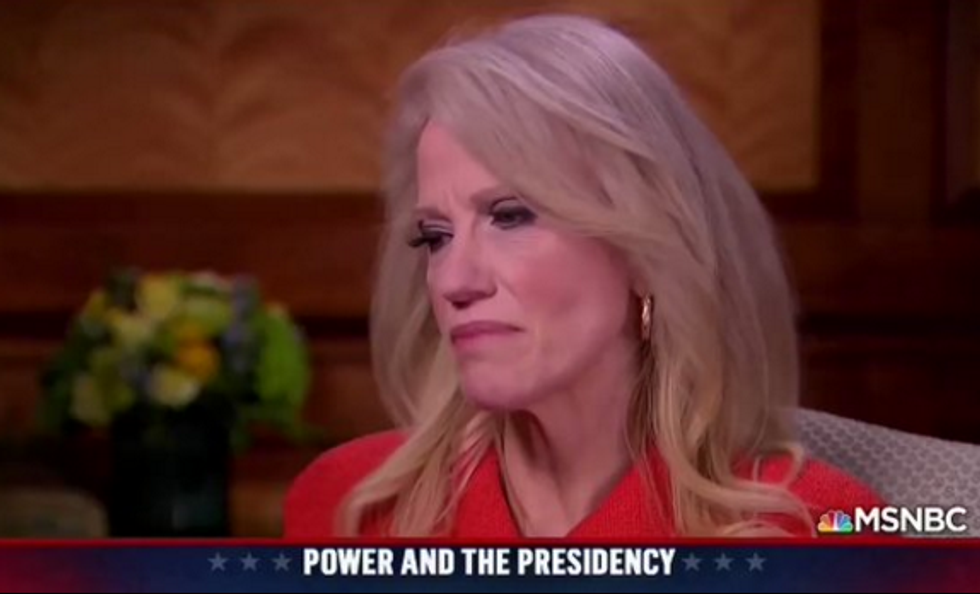 It' s still difficult for her to tell the story.

It was a cool morning in 2011, or 1984, or 1526, or 4 B.C., the year doesn't matter. Kellyanne Conway was a young girl, or a teenager, or possibly an old great grandmother, reflecting on a life well lived. She doesn't remember how she ended up in Bowling Green that day, only that she had just left an angry meeting with the owners of the Miss New Jersey Blueberry Princess Pageant, who had told her she wouldn't be able to carry out her duties as Blueberry Princess Of New Jersey if she kept eating her fingernails like that. They also told her to stop lying, and you know what, that's highly unfair.

Furious, she drove and drove, and before she knew it, she was in Bowling Green, Kentucky, getting massacred by some Iraqi refugees. Whether it was just she that perished in the attack, or a number equivalent to the millions of people who attended Donald Trump's inauguration, it doesn't really matter. All Conway knows is that way more people died in the Bowling Green Massacre at the hands of Iraqi refugee terrorists (PAID TO BE THERE BY BARACK OBAMA AND GEORGE SOROS) than the number who marched in the world-famous Bowling Green Women's March the next day. So many more, it was yoooooooooge.

Regardless, this is why Donald Trump's Muslim ban is so important, so Kellyanne Conway doesn't perish in the Bowling Green Massacre yet again, like she did all those times during the Obama administration.

We see you are one of the brainwashed majority of the American people, who trusts the liberal media and John McCain more than you trust Trump and Kellyanne Conway. Why are you so focused on the words coming out of Conway's mouth, about the Bowling Green Massacre, instead of focusing on whether she truly believes, in her heart, that she died in the Bowling Green Massacre? You are unkind, and the worst.

But Kellyanne Conway did, because she says she did, and if you say differently, you are FAKE NEWS, and you should shut your mouth.

(To donate to victims of the Bowling Green Massacre, click here.)

.@KellyannePolls says that 2 Iraqi refugees "were the masterminds behind the Bowling Green massacre."

(There was no such massacre.) pic.twitter.com/sD3Nnb5xfE