Kellyanne Conway Says Meryl Streep Is The REAL Disabled-People-Abuser, This Is Our Shocked Face 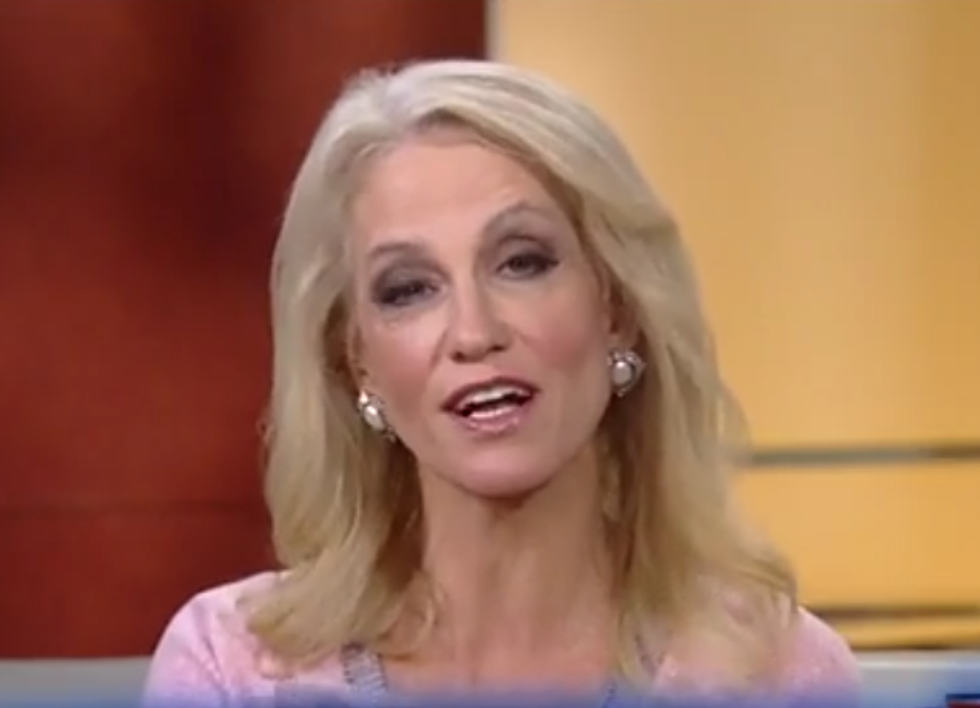 When Donald Trump steps in a pile of dog crap, two things always happen. He gets on Twitter and makes himself look even weaker and sadder, and Kellyanne Conway is dispatched to all the TV shows to try to do disaster control. So of course, in the wake of being read for filth by Meryl Streep at the Golden Globes, Trump has been laughably tweeting that Streep is "overrated," and oh hey surprise, Conway has been all over the place this morning, spinning her ass off, lying about Trump's words and actions, and just generally being a total dick.

Conway gets paid many dollars to pretend Trump's "victory" was anything but hollow, to act like the enormous minority of Loser-Americans who voted Trump into office represent some sort of "movement," and to suggest that it's somehow the majority of America's responsibility to support our new Dear Leader. She and her boss really don't quite get how America works. Here she is on "Fox & Friends," telling Steve Doocy and the other interchangeable Fox hacks how the REAL issue is that if Meryl Streep claims to care so much about the disabled people Trump mocks, then why isn't she talking about those BLACK people who tortured that WHITE disabled person on Facebook Live? Those BLACK people said mean things about DONALD TRUMP while they were abusing the disabled WHITE person! C'mon, Meryl Streep! Don't you even care?

I'm glad Meryl Streep has such a passion for the disabled because I didn't hear her weigh in or I didn't even hear her use her platform last night, Ainsley, to give the shoutout to the mentally challenged boy who last week was tortured live on Facebook for half an hour, by four young African-American adults who were screaming racial and anti-Trump expletives and forcing him to put his head in toilet water.

Did you hear the part about KELLYANNE SAW MEAN BLACK PEOPLE?

Of course, those guys who did that were complete assholes who need to be in jail, and we said that. It's also not germane to a discussion about Trump mocking a disabled reporter. Except oh wait, just kidding, Conway says Trump didn't mock that reporter, and that "he has debunked this so many times." He even tried to "debunk" it again, in his Tweeter Tantrum about the mean lady Meryl Streep!

Conway also said Streep was "inciting people's worst instincts" by saying that speech, which ... huh? Instincts toward embracing diversity and preserving a strong free press and being generally decent human beings, as opposed to being a lying, soulless asshole like Kellyanne Conway and Donald Trump?

Anyway, the rest of Conway's message to the "Fox & Friends" was about how Hollywood lost and Trump won, and also can Kellyanne borrow some of the Hollywood ladies' "gazillion-dollar gowns" for the inauguration? (No. Besides, didn't Trump say his inauguration is so glitzy and A-list that he can't even find a pretty dress to wear to it, because all the stores that sell pretty dresses in DC are sold out?)

Let's go to CNN, so Kellyanne Conway can cry at Chris Cuomo about how nobody gives Trump the "benefit of the doubt," and moreover, when considering whether Trump mocked that reporter, nobody even considers what was in Trump's heart at the time. No, for real, Conway actually complains, "You always want to go by what's come out of his mouth, rather than look at what's in his heart." We want to emphasize that that's a REAL QUOTE, that we did not make up.

"Why can't you give him the benefit of the doubt?" Kellyanne Conway says Trump wasn't mocking reporter's disability. https://t.co/3LAWwTIME4

Because Kellyanne Conway is a very serious person with very serious arguments to make, we'd like to treat her fairly, by posting the video of Trump mocking the disabled reporter once again. But THIS TIME, we want everybody to focus not on what Trump is doing or saying, but look deeply into Trump's heart, and judge it based on that:

Did you see Trump's heart? Nah, we didn't either.