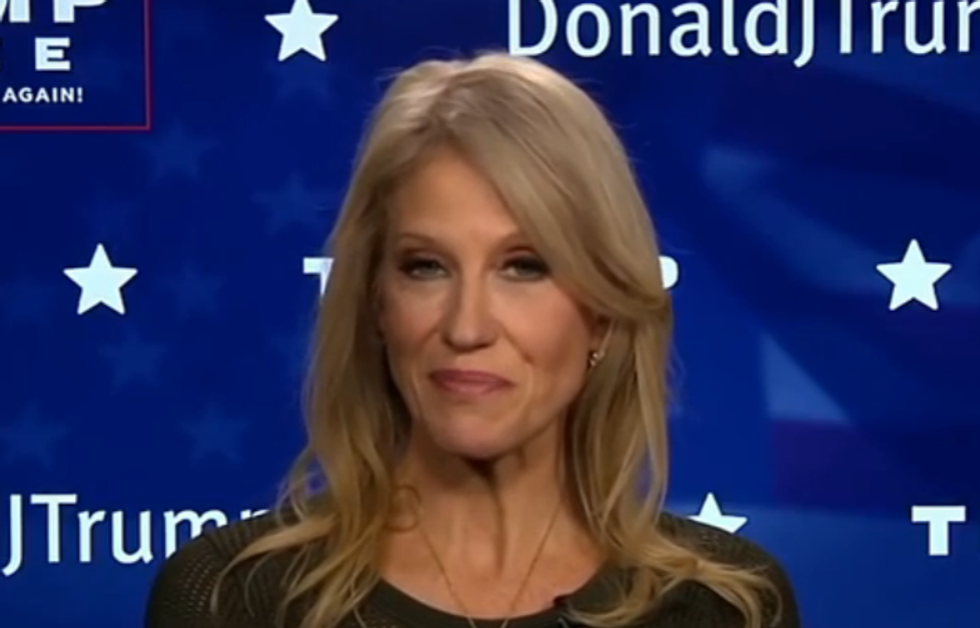 Oh boy, it's a day, therefore Trump idiot Kellyanne Conway is out there being an asshole somewhere. Let's find her! Is she under the couch? No, silly! Behind the fridge with the rats? Yes, probably there maybe! Oh look, we have a confirmed sighting of Conway saying words to Andrea Mitchell on MSNBC about how the CIA just needs to "get over" its weird obsession with how Russia did all kinds of hacking and likely handed the election to its puppet, Donald J. Trump. PFFFFFT, Russia helped Trump win, you libtards lost, get over it, you guys, WHY ARE LIBERALS SUCH BAD SPORTS?

After a long discussion about how Exxon CEO Rex Tillerson would be a great secretary of State and it doesn't matter that he's a known Putin nut-licker like so many of Trump's friends, and some blah blah about Carly Fiorina, this happened:

CONWAY: All [Trump] criticized were unsourced, third-hand comments about the fact that Russia influenced the election, in a way that they intended to hurt Hillary Clinton and make sure she lost ... All the stories go to the same conclusion, which is ah! the Kremlin tried to influence the election! [...]

Whether it's blaming James Comey or Russian interference, or the movement that we're not even involved with, it's a recount in these states, I mean, they need to get over it, and it's very insulting ...

WTF? Andrea Mitchell agreed that WTF did Conway just say? Because OK fine, if you are part of the Trump campaign and you feel like the mean liberals are calling for recounts and saying FBI Director James Comey is a Republican operative P.O.S. whose stupid election-meddling letter might go down in history as a pivotal moment not unlike the assassination of Archduke Franz Ferdinand, just because they're not OK with Donald Trump being inaugurated president of the United States, that's fine. That being said, those of us blaming Comey and doing whatever we can to keep that man out of the Oval Office are doing the Lord's patriotic work, so STFU, Kellyanne Conway.

HOWEVER. She lumped American intelligence right in there, didn't she? Like the CIA is some mean tool of the left or something. Conway thinks the intelligence community is being SO MEAN to Trump, by saying Russian interference was definitely aimed at helping Trump win, and because of that, the huge majority of Americans who hate Trump might think his "win" was illegitimate. UNFAIR!

Mitchell basically said all the stuff we just wrote, but not as funny as we said it, and Conway responded by saying "It's simply not fair!" the way everybody is politicizing this leak from the CIA, by reporting accurately on the CIA's assessment, and then she reiterated how much of a dick she is:

That is what this is about for many people on the left, who just can't seem to get over the fact that this guy was elected president. Someone else's fault, it's Jim Comey's fault, it's the recounts' fault, it's Bernie Sanders's fault ...

Blah blah blah. According to the Mother Jones-addicted patchouli liberals at the CIA, it was partially Russia's fault, end of story, GO AWAY, KELLYANNE CONWAY.