Ken Ham Pretty Sure That Aliens Don't Exist, But If They Do, They're Going To Hell 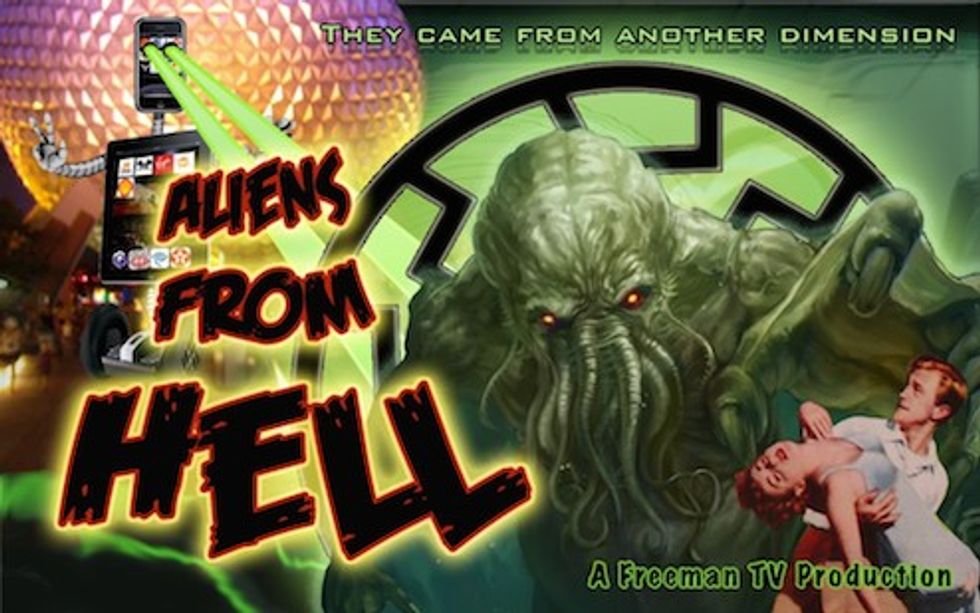 We will admit that there are well-meaning arguments on both sides of the debate about whether it is wise to generously fund America's space program. On the one hand, 'Merica needs that relatively tiny amount of money for lots of other things probably. On the other hand, space is pretty fucking dope. You'll note that neither of those credible thoughts is predicated on the notion that we shouldn't poke around in space because aliens are unredeemed by Jesus and would go to hell, if they existed. But that's because we are not Ken Ham, creationist nutbar extraordinaire.

On the 45th anniversary of the Moon landing, Ken Ham took to his equal parts absurd and quixotic little blog, Answers in Genesis, to explain how eeeeevil secularists just want to find extraterrestrial life so that they can throw it in the face of Christians and yell "EVOLUTION, BITCHES."

You see, according to the secular, evolutionary worldview there must be other habited worlds out there. As the head of NASA, Charles Borden, puts it, “It’s highly improbable in the limitless vastness of the universe that we humans stand alone.” Secularists cannot allow earth to be special or unique—that’s a biblical idea (Isaiah 45:18). If life evolved here, it simply must have evolved elsewhere they believe.

Is there a more succinct example of the complete lack of intellectual curiosity that is the hallmark of the modern evangelical movement? Oh no there is not. People want to explore space because it is space and science is cool and yes, perhaps we would find life on other planets and that would be rad, but only Ken Ham believes that the rest of us are thinking "man, I sure hope there is life on Mars so I can tell Ken Ham to suck it." Not that we'd bypass an opportunity to tell Ken Ham to suck it, mind you.

It only gets way way weirder when Ham tries to explain the theological underpinnings of his feels about aliens.

Now the Bible doesn’t say whether there is or is not animal or plant life in outer space. I certainly suspect not. The Earth was created for human life. And the sun and moon were created for signs and our seasons—and to declare the glory of God.

Hmmm. That whole theory doesn't really cover why God created the rest of the solar system or bazillions of galaxies and all that. Does the Ken Ham branch of idiot just believe there is nothing but the sun and moon?  Because that is some pre-medieval thinking right there. But please, Ken, do go on and explain how even if there are little green men somewhere, they're forever tainted by original sin because Jesus didn't save the Klingons.

God’s Son stepped into history to be Jesus Christ, the “Godman,” to be our relative, and to be the perfect sacrifice for sin—the Savior of mankind.

Jesus did not become the “GodKlingon” or the “GodMartian”! Only descendants of Adam can be saved. God’s Son remains the “Godman” as our Savior.

So God made the whole universe, and then Adam sinned and wrecked the whole universe, but then God sent Jesus, but only to save Earth, because God is kind of an inconsistent dick, we guess? Fuck if we can follow this. Probably because we're godless secularist communist monsters, but you know what? We're OK with that.