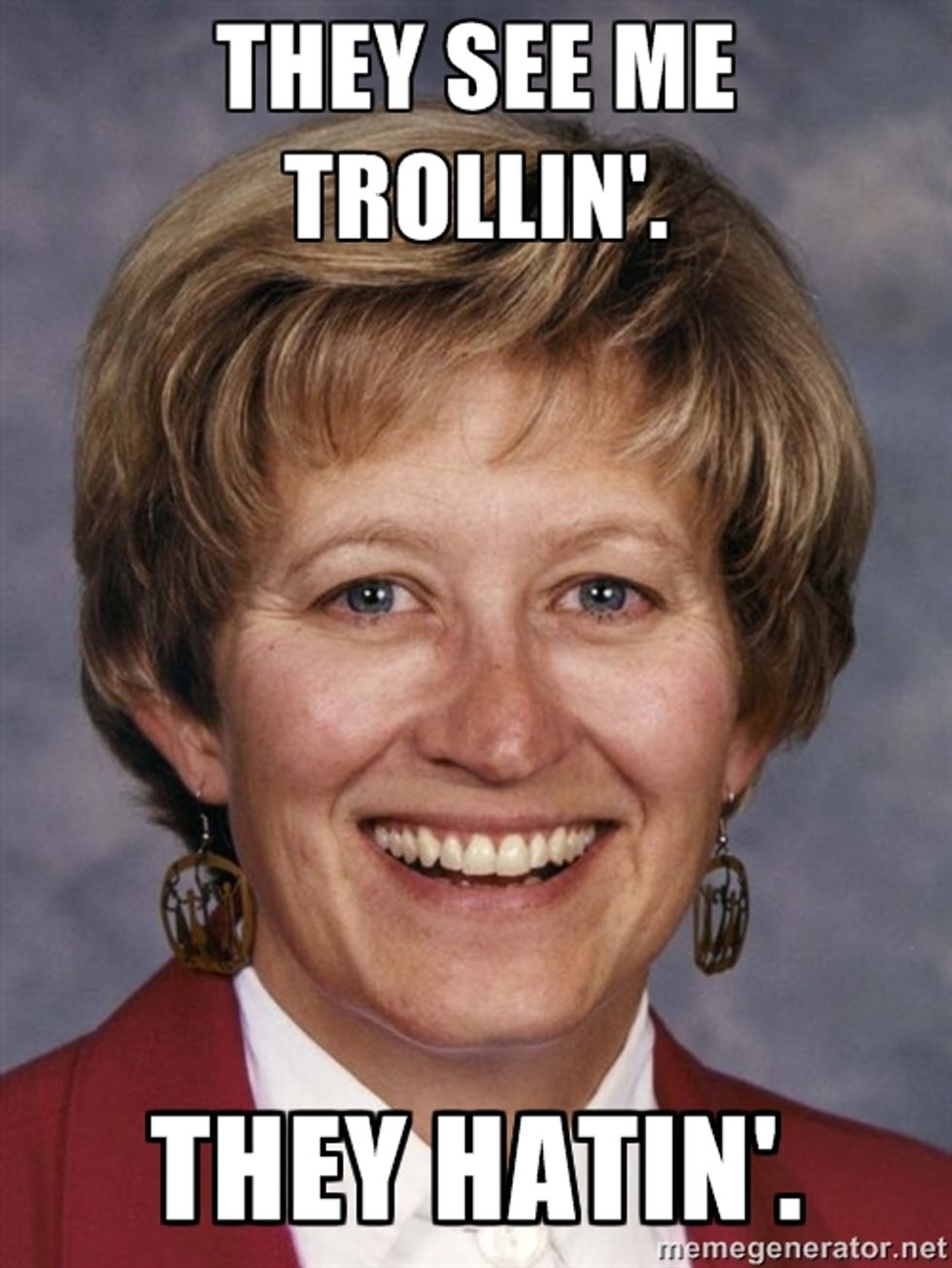 This is Kentucky state Rep. Mary Lou Marzian. She is your new legislative pal.

Oh great, some liberal Democrat Kentucky lady is trying to be FUNNY now, and she's doing jokes about something that should NEVER be joked about, namely the God-given right of every red-blooded American man to have all his patriotic red blood patriotically rush to his penis at a moment's notice.

Get a load (HAHA WE SAID "LOAD") of Kentucky House Bill 396, sponsored by Democratic state Rep. Mary Lou Marzian, which would force men to go to the doctor TWO TIMES and also get a permission slip from their wives that says, "I, Kentucky Lady, say it is OK for my husband to get the Viagra for his sad, limp old man dongwhistle." Even worse:

HB 396 also specifies that only married men may obtain the drug and requires "a man to make a sworn statement with his hand on a Bible that he will only use a prescription for a drug for erectile dysfunction when having sexual relations with his current spouse."

"This is about family values," Marzian said.

That's right! Marzian says, "I want to protect these men from themselves," because she is hilarious. So, this is good news for Kentucky clerk lady Kim Davis, in case her husband's dick decides it ain't work no more after seeing the way she makes sex faces at Mike Huckabee.

Now, as a human man, we are inclined to believe that this is TYRANNY! and assorted other ALL CAPS words, but it turns out that Rep. Marzian is doing that thing ladies ALWAYS do, trying to make a point about how it's somehow OK for conservative Republican men to regulate ladies' hoo-nanny parts, but how would you like it if we regulated your sperm-shooters, HUH BOYS?

[S]he acknowledged the bill is a pointed response to several anti-abortion measures in the current legislative session, including Senate Bill 4, which requires a woman seeking an abortion to get counseling 24 hours in advance of the procedure from a health professional. The counseling must be in person or via live telecommunications.

[contextly_sidebar id="YiNN7tM9GGADMeZ17TQK2oIDQJtP680x"]Republicans in the Kentucky state senate are also currently pushing one of those friendly forced ultrasound bills that are so popular with the Kids These Days, so obviously Rep. Marzian's bill is timely. Maybe they could do a two-for-one special kinda thingie at the Kentucky Sex Parts Clinics where ladies could get vaginal wanded while their husbands get their dick parts toughened up, and then afterward if all the patients were extra well-behaved for the doctor, they get a certificate for a free Wendy's Frosty or something. Fun for the whole family!

You will be delighted to learn that Rep. Marzian's trollin' and hatin' isn't confined to hypocritical womb-sniffing wingnuts. She also has a non-Viagra-induced lady boner for stickin' it to gun-humping wingnuts:

Marzian said she also plans to file a bill requiring potential gun buyers to obtain counseling 24 hours in advance from victims of gun violence before the purchase.

"I'm just making sure the government is taking care of your safety," she said.

Rep. Mary Lou Marzian, you are one of Wonkette's new favorites. Please contact us if you need any more help ruffling these dumb Republicans' flaccid dick feathers, though you seem to be doing quite well all by yourself.