Kevin McCarthy Gives Trump Red And Pink Starbursts, Not The Other Colors, Those Are Shithole Starbursts 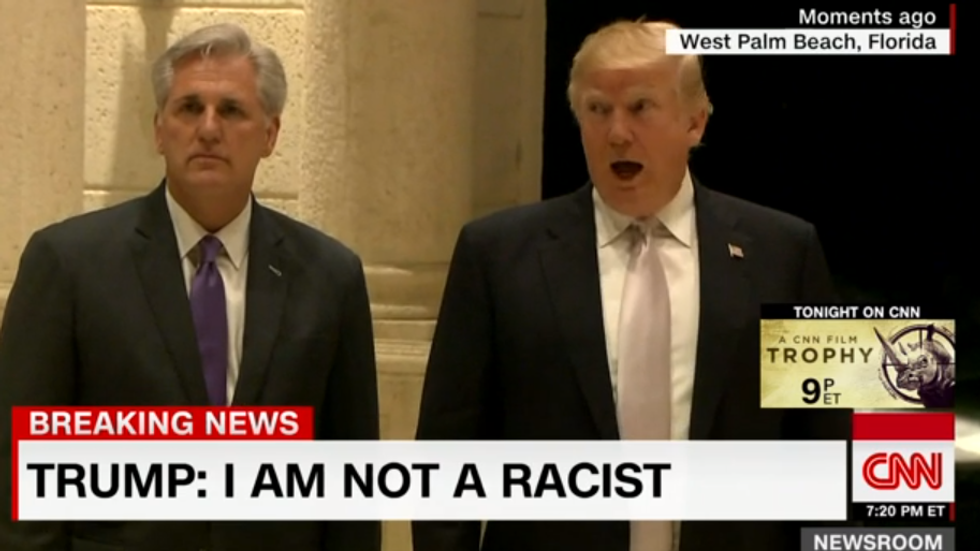 This is what Trump looks like when he's pretty sure Kevin McCarthy is hiding Starbursts in his pants.

In the running contest to determine which Republican member of Congress is the BIGGEST, most embarrassing Daddy's boy for Donald Trump, we have a new contender, and it is House Majority Leader Kevin McCarthy. You know him! He's the one who got caught on tape during the campaign LOLing about how he thought Russia was paying Trump. FLASHBACK TO JUNE 15, 2016:

“There’s two people I think Putin pays: Rohrabacher and Trump,” McCarthy (R-Calif.) said, according to a recording of the June 15, 2016 exchange, which was listened to and verified by The Washington Post. Rep. Dana Rohrabacher is a Californian Republican known in Congress as a fervent defender of Putin and Russia.

And we guess McCarthy is OK with that now, because apparently he buys Trump Starburst candies and makes his staff separate out the red and pink ones because Trump is racist against the other Starburst colors, and he presumably signs them "Love, Kevin. See you tonight, big boy?" This information comes from the Washington Post, because it's just a very normal story about a president and his best boy in Congress. Read the story of their budding candygram romance:

President Trump and House Majority Leader Kevin McCarthy (R-Calif.) were alone in the presidential suite on Air Force One [sexy!!!!!! - Ed.], flying east toward Washington in early October, when the president reached for a handful of Starbursts, the square-shaped candy fruit chews.

But instead of unwrapping all the treats, the president was careful to pluck out and eat two flavors: cherry and strawberry, McCarthy noticed. [Kevin noticed!!!!!!!! - Ed.]

“We’re there, having a little dessert, and he offers me some,” McCarthy recalled in an interview. “Just the red and the pink. A bit later, a couple of his aides saw me with those colors and told me, ‘Those are the president’s favorites.’ ”

Days later, the No. 2 Republican in the House — known for his relentless cultivation of political alliances — bought a plentiful supply of Starbursts and asked a staffer to sort through the pile, placing only those two flavors in a jar. [SO THOUGHTFUL!!!!!!!!!! -Ed.] McCarthy made sure his name was on the side of the gift, which was delivered to a grinning Trump, according to a White House official. [You gotta sign the card, otherwise how is the Bachelor gonna ever gonna decide to give you the rose???????? - Ed.] [...]

McCarthy said the gift was obvious, as Trump enjoys small gestures as well as grand ones. “He remembers everything,” McCarthy said. “Of course I put my name on the jar.”

This is so fucking embarrassing and if we were Kevin McCarthy we should not show our face on Capitol Hill today or ever again. On the other hand, if we were Nancy Pelosi, we would chase McCarthy around the Capitol every day for the foreseeable future, singing, "Kevin's got a boyfriend! Kevin's got a boyfriend!" and having giant bags of Starbursts delivered to his office, with notes attached that say "Go get him, stud!"

Also, Kevin McCarthy's staffers, we need you to PLEASE TAKE NOTE that you can buy just the red and pink ones now. You don't have to buy the big bag and deport all the colors the president doesn't like. See?

WaPo reports that McCarthy really seems to enjoy his close relationship with Trump, getting to be the guy who LITERALLY sends Starbursts up the president's leg (which sounds like a weird sex thing, not that there's anything wrong with that). And we do see Trump and McCarthy together a lot! Indeed, when "Dicky Durbin" and Lindsey Graham went to the Oval last week to talk about immigration and "shitholes," McCarthy was already there! (And so were Senators Tom Cotton and David Perdue, who probably wish they had the Starburst idea first.) No word on what McCarthy (and Cotton and Perdue) were wearing that day, but we are going to guess very sexy negligees.

Kevin McCarthy got to go to Camp David with Trump this month and he got to have dinner with Trump in West Palm Beach this weekend, and also, when he has to tell Trump bad news about the upcoming midterm elections, he is nice enough to use pretty pictures instead of big words, which are hard for the president:

According to two people familiar with the presentation, Trump appreciated McCarthy’s use of pictures and charts rather than a memo. [...] A second White House official said Trump may not have listened to others as well as he listened to McCarthy, which is why the tough love needed to come from him.

Ooh, TOUGH LOVE! Didn't know the president was into that, but whatever!