Kid Rock Just Too Hilarious For Us Liberals To Understand! 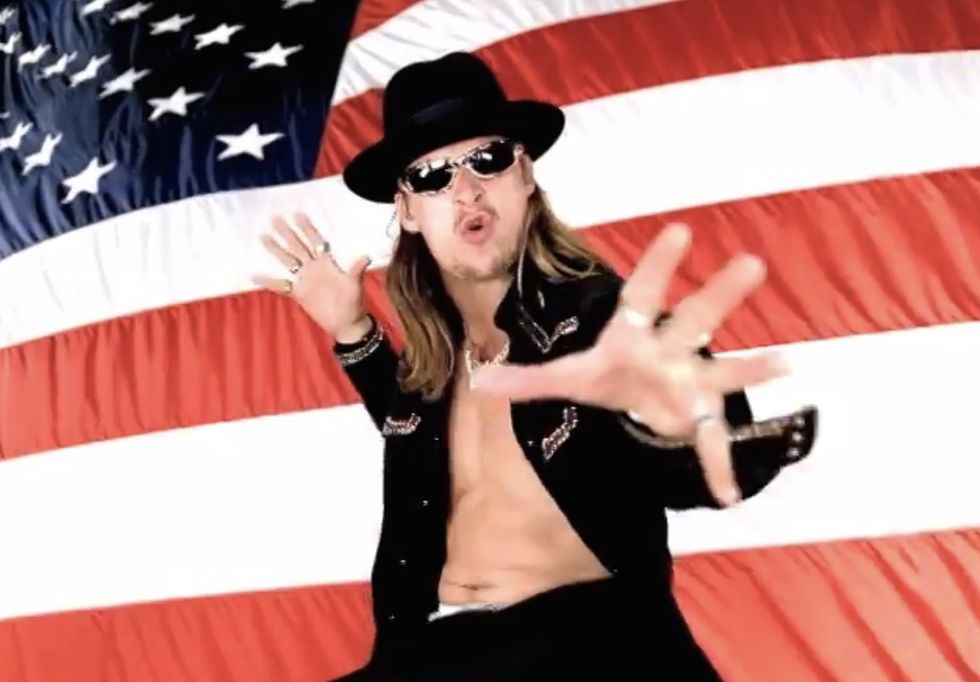 Kid Rock, the musical genius who Sheryl Crow inexplicably allowed to bang her back in the day, is a Trump-fellating wingnut. But what you didn't know was that he's also a pretty creative guy, with a funny bone to match. Why, look at this t-shirt he is selling on his website:

Do you get it? The part of America that is red -- which contains most of the least productive counties in the nation -- is the REAL AMERICA, whereas the blue parts -- where the productivity and innovation and culture and deodorant are, the states that by and large pay for the red welfare states to exist -- are called "Dumbfuckistan." This is a hilarious joke that has not been made by liberals about red states at least one million times since back in 2004, when George W. Bush was re-elected to the presidency!

"Dumbfuckistan" is not an entry in the Wiktionary either, with the definition "(pejorative, US, vulgar) red states collectively," with a cross reference to the term "Jesusland," which is another long-running joke liberals have been making about the #SadStates since the Bush years.

It's also definitely not the same design as a t-shirt that had already been made, with the labels switched, where the red states, those desolate, education-free wastelands with islands of blue (educated, thriving cities) dotted throughout, are labeled as "Dumbfuckistan."

Look what happens when you Google image search "Dumbfuckistan":

Hmmmm, looks like they are on their way to a Kid Rock concert maybe.

Our point is that Kid Rock has made a hilarious joke, in such an original way, that he has really sticked it to us liberals good, even more than these other conservative t-shirts did.

Unfortunately, we are going have to lie back and take it while Kid Rock sticks it to us liberals some more, because this t-shirt is also on his website:

Is that what's been bugging our mouth so much today? We thought it was a stray grain of rice or something.

Anyway, our hats are off to Kid Rock, whose achievements in artistry have reached such great heights that Prince, David Bowie and Leonard Cohen are surely welling up with tears in their graves.

Oh wait, did somebody say "HATS OFF"? We have some hats for you to take off in Kid Rock's unbathed direction! They are these "Hell. No." hats, for the great majority of Americans who voted for Hillary Clinton to wear! They are nice hats, and they say that Donald Trump will keep his tiny hands off our True American Democracy, and they also solidly imply that Kid Rock is a pussy.

Could totally take Kid Rock in a fight.

Buy yours here, because fuck Donald Trump and "LOL Kid Rock bless his heart" is why.