Kim Davis: Maybe The Appeals Court Will Feel Bad About My Gay Butthurts? 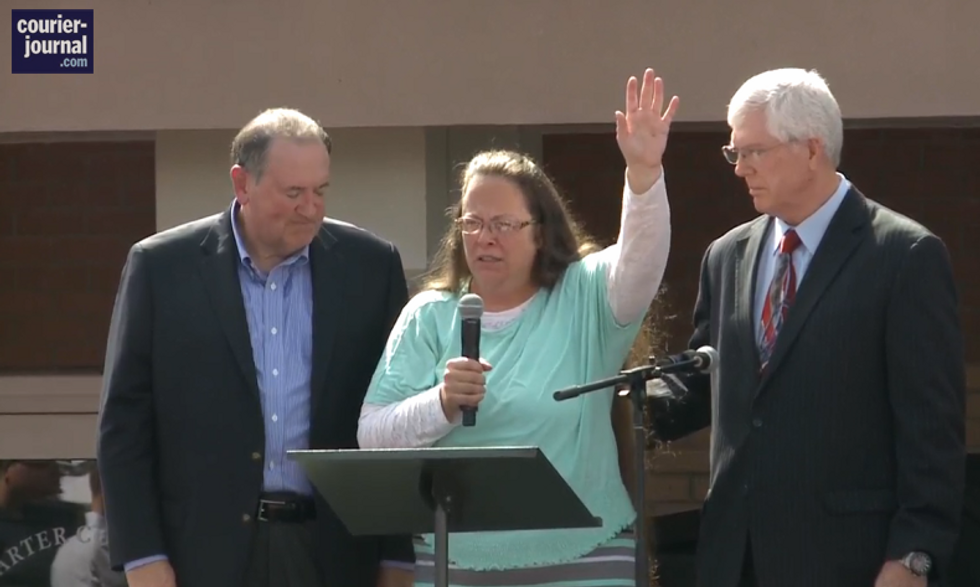 Oh gosh, big news in the Kim Davis case, folks! Having had their asses handed to them multiple times by District Court Judge David Bunning, the fine holy rolling jizzbrains at Liberty Counsel have decided to lead their client further down the road to eternal embarrassment (worse than heaven or hell; angels and demons just poke you with sticks and call you weird names like "beavergobbler") by appealing to the Sixth Circuit Court Of Appeals.

And what do we learn in their 126-page filing? Not a whole hell of a lot! Yr Wonkette read THE WHOLE THING, and we'll be billing attorney Davis attorney Mat Staver for our precious time because, if there was some clever new argument in there that might convince the judges that Kim Davis is anything but a butthurt, homophobic loon's twat who's too ignorant to do her own job, we musta missed it.

Here's what they want:

We may have made up that last part.

Let us break down the rest for you:

An obsessively recurring theme is that those homos in Row-an County all seem to have cars for gettin' around, probably somethin' swishy like a Miata, and they didn't have any trouble gallivantin' to Kim's contempt hearings, so how could this POSSIBLY be a burden for couples getting marriage licenses?

Just a sampling of quotes along those lines:

...[It] tramples upon Davis' religious rights in subjugation to Plaintiffs' "preference" for a marriage license authorized by a particular person in a particular county.

...[T]here are 7 counties and 10 clerk offices within an hour drive.

Maybe they shouldn't mention that so much, since it helps make OUR point, which comes up again and again, in things like this, and in issues like the recent DMV closings all over poor black counties in Alabama. It may well be that the Miata-sporting homogays in THIS case have the mobility and financial wherewithal to just hop a county or two over to get their bidness done. But #NotAllGays are that fortunate, and #NoGays should have to be Substantially Burdened that way in the first place!

The filing actually quotes from the district court ruling to this effect, which says, "It does not seem unreasonable for Plaintiffs, as Rowan County voters, to expect their elected official to perform her statutorily assigned duties.” Well no shit, Sherlock. Not sure why Liberty Counsel included that, since it makes them look like morons.

Why all these gaywads need Kim's approval? Why is she so important???

Davis et al. mention the "plaintiffs' demands for her approval of their proposed unions." This is a wrongheaded, dumbassed construct. Plaintiffs are not asking for Kim Davis, the lady what got married four times before she became the bride of Jesus, to personally approve their marriages. They are asking the clerk of Rowan County, state of Kentucky, nation of U.S. America, where gay buttscissors marriage is, according to the Supreme Court, LEGAL, to sign their damn marriage licenses.

This is why Gov. Beshear's original directive said "do your fucking job, or resign." Nobody in Rowan County, or in Bucksnort, Tennessee, or anywhere else gives two diddlysnots whether Kim Davis, in her own heart, APPROVES of their marriage. They care whether the county clerk, acting in her capacity as the designated local representative of the gubmint, will SIGN THE FUCKING FORM THEY'RE ENTITLED TO.

But she doesn't want to go to hell! She wants to go to heaven with all her husbands and Huckabee

But oh, she can't do it! Because, they say, she will "suffer irreparable harm if she is forced to authorize and approve marriage licenses that substantially burden her undisputed sincerely-held religious beliefs about marriage."

Why doesn't the court understand that Kim Davis's loving God is going to roast her in the lake of fire for all eternity if she gets The Gay on her? She's said this is a "heaven or hell" issue! Why are they forcing Kim Davis to close escrow on the cutest little place in Gehenna when she dies?

Obviously, because everybody in the United States hates Jesus. Or maybe SHUT UP, LADY, AND DO YOUR JOB is why. The only valid "substantial burdens" in this case are the idiot-ass beliefs Kim Davis signed onto four years ago.

Enjoy another loss in court, Kim and all your bros at Liberty Counsel! You've earned it!