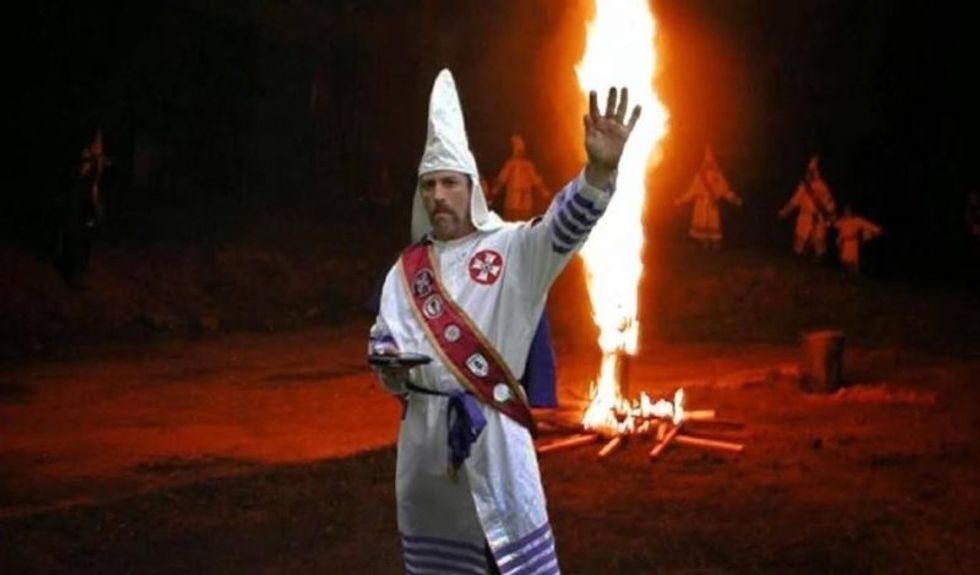 Frank Ancona, the leader of the "Traditionalist American Knights of the Ku Klux Klan," which he liked to claim was a much nicer version of the KKK that would never ever dream of violence, was found shot to death Saturday after going missing Wednesday. The Park Hills Daily Journal reports charges are likely to be filed today. Despite Ancona's fetish for grabbing publicity as a KKK leader (he claimed his group had several thousand members, though probably the actual figure was much lower), the Daily Journal reports the murder appears to have been unrelated to his Klanning:

seemingly any involvement with the KKK had little, if anything, to do with his death. While specifics were being withheld until the filing of formal charges, all indications were the death occurred at Ancona's home in Leadwood which he shared with his wife, Malissa.

Investigators spoke with Malissa Ancona and her son, Frank's stepson, several times over the weekend. Reportedly the stepson, who's name was not released, was picked up on an unrelated warrant and was being held in a local jail.

Ancona's body was found Saturday on the banks of the Big River near Belgrade, Missouri, by a family that was out fishing; Washington County coroner Brian DeClue (yes, really) told the Kansas City Star Ancona was killed by a single gunshot to the head, which DeClue said was "not self inflicted.”

Virginia Ku Klux Klan Tired Of Being So Misunderstood

Since founding the "Traditionalist American Knights" in 2009, Ancona had made a name for himself by claiming that his group was not a hate group, no not at all, just a nice group of guys who believe white people are inherently superior and who enjoy an occasional cross-burning and starting everything with "K." Yr Wonkette first covered his shiny happy Klan after the group left flyers all over Chesterfield County, Virginia, in 2014, when Ancona told the Richmond Times-Dispatch he simply couldn't understand why people would associate the KKK with hate, since they're all about love. Of the white race. Yeah, he was one of those. Same racist bullshit with a few distracting claims about being something new and different, and a certain talent for getting himself on cable TV.

“The thing that really gets me is that (people are) saying we’re teaching our children to hate people just because of their race, creed and color, and that’s a complete lie and falsehood” [...]

“The secret is not that we have this plot or anything … we’ve gotten this bad reputation,” Ancona said.

Clearly, it was all a big mystery to him why anyone would associate his group with hatred. Oh, sure, there were the flyers themselves, which warned that “many people have experienced the blacks firsthand” and have seen the “savagery and animalism in many of these people,” which could be interpreted as maybe a little hatey. But the flyers also explained that the Traditionalist Knights were no threat to anyone, really, because the KKK is devoted to

“exalting the Caucasian race and teaching the doctrine of white supremacy.”

Yet even with all his friendliness to the colored and mongrel races, people still thought he was a hater.

CNN Looks Into Whether KKK Can Rebrand As Kinder, Kooler, Kuddlier, Possibly With Happy Meals

Ancona's disingenuous attempts at portraying his group as a new kind of Klan even managed to win him a very serious think-piece on CNN in April 2014, the week after a racist murdered three people at a Jewish community center in Kansas, on whether it would really be possible for the KKK to rebrand itself as a nonviolent group. Spoiler alert: Even CNN decided probably not, and then went back to 24/7 coverage of the missing Malaysian airliner.

KKK Leader Urges Missouri KKK To Cool It With The Racism, Please

During the protests in Ferguson, Missouri, Ancona also got a fair amount of publicity for publicly condemning another KKK group, the "New Empire Knights of the Ku Klux Klan," for raising funds to support Officer Darren Wilson, who had shot Michael Brown. It's not so much that Ancona found raising funds for Wilson offensive, but that the other Klan group didn't have a legitimate KKK pedigree:

“We are a registered organization. We have a charter with the state… Half of them don’t have the rituals for our ceremonies.” […]

“No one has ever heard of the guy, I talked to the older members of our group,” he said. “There are other legitimate Klan organizations, but this group here sprang out in the last year or so I don’t believe he has any members. I think it’s just him.”

Ancona was one principled guy, and he wasn't about to let those New Empire Knights horn in on the legitimate KKK. Splitters! They were every bit as bad as the Judean People’s Liberation Front. Ancona then went on to distribute leaflets in Ferguson warning that his group would use lethal force to defend the community from all those terrible black rioters, not that he was inciting violence or anything, because, as he explained in a video, the real instigators of violence were the black protesters, not that he hated them or anything:

“These people are acting like savage animals,” he said of protesters. “And that’s what they are, is a bunch of savage beasts.”

Ancona had insisted that his group's firm stance against violence -- uh huh -- and its refusal to engage in hate -- yes, sure -- had made him many enemies among other Klan groups:

“How can you be a Christian organization and hate other people?

“I’ve actually taken a lot of heat from other white nationalists because of that,” he said. “I’m called an N-lover and a Jew, blah, blah, blah. I’m doing everything I can to hold it to the principles it’s supposed to be by.”

And while Klan groups sometimes do go to war with each other, it looks like Ancona probably died in a plain old family spat of some kind; after Ancona's employer reported him missing Friday, his wife, Malissa, wasn't exactly helpful when police arrived:

When the chief and officer arrived they found Frank's wife, Malissa, and her son, Frank's stepson, outside the home. They inquired about Frank and were told by Malissa that he got a call from his workplace and needed to drive across the state to deliver a part, which is what he did for a living [...]

A call to the employer verified they did not send Frank across the state on a job.

The officers requested to enter the house. At first Malissa denied access, but later consented to allowing them to enter. Once inside, the officers found a safe which had been busted open and any contents removed.

It was also discovered that all of Frank's firearms were missing except the handgun he carried regularly as a holder of a concealed carry permit.

Malissa claimed he'd taken all his guns with him on his "business trip," and said he had told her when he returned he planned to file for divorce. Oh, and the day Ancona went missing, she posted a Facebook notice saying she was looking for a new roommate; she explained to police she figured that if Frank was leaving her, she'd need someone to help share living expenses.

While no charges have been filed, we won't be incredibly surprised if maybe she turns out to be involved, just maybe. It seems like a possibility. We'll update when more information is available.

The real shame here, of course, is that while whoever was responsible will likely be charged with some form of homicide, now that Donald Trump is in office, it's unlikely that the Environmental Protection Agency will be willing to prosecute dumping Ancona's body in the river as water pollution.