KKK Feels Ready For A Comeback, Since Trump Is Stealing All Its Best Material Anyway 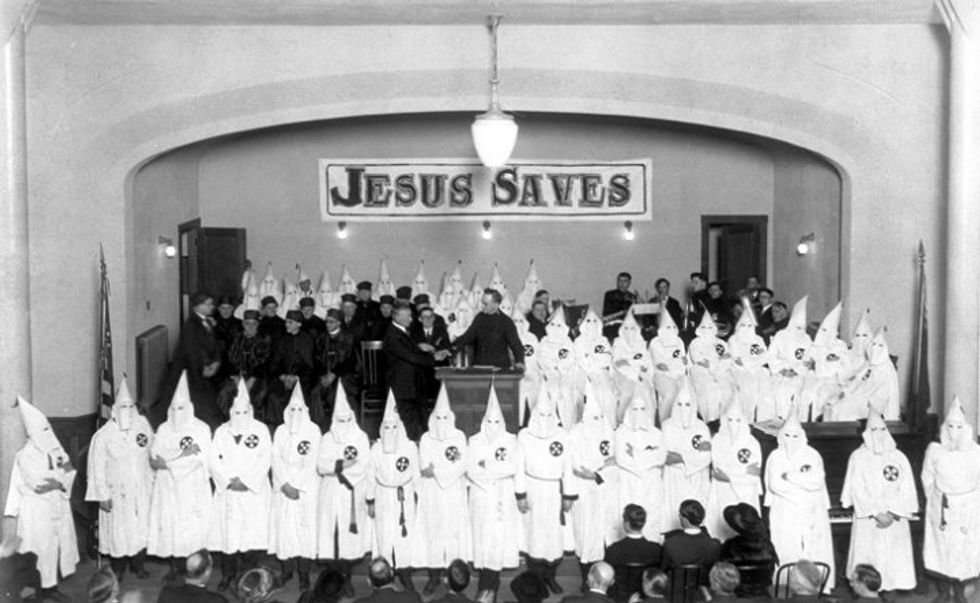 In case you hadn't heard the news, Crystal Pepsi is making a comeback, due to popular nostalgic demand. And it's probably a fine time for it, really, because we've all grown up a lot and probably aren't that bothered by soda lacking artificial color anymore. Crystal Gravy, of course, is another story. No one will ever be ready for that.

Of course, there are other things that, though they are still around, are no longer quite as big as they once were. Things like Zubaz, and Beanie Babies, and The Heaven's Gate Cult. This is all for the best, really, as Zubaz are hideous, Beanie Babies made people real weird, and Heaven's Gate made people wear matching outfits. And, you know, kill themselves.

For quite some time, the Ku Klux Klan has fallen into this category -- with periodic appearances on Jerry Springer, attempts to clean highways, and the odd initiative to recruit new members by dropping off weird baggies filled with leaflets, jolly ranchers and candles on their lawns. But although they've picked up some new people over the course of Obama's presidency (gross but true!), they're still on the fringes.

However! The Klan says they're actually on the verge of a comeback. A YUGE comeback, if you will!

"We will work on a unified Klan and/or alliance this summer," said Brent Waller, imperial wizard of the United Dixie White Knights in Mississippi.

In a series of interviews with The Associated Press, Klan leaders said they feel that U.S. politics are going their way, as a nationalist, us-against-them mentality deepens across the nation. Stopping or limiting immigration - a desire of the Klan dating back to the 1920s - is more of a cause than ever.

Sadly, they are not really all that wrong. It sure does seem as though a lot of super wacky racist nationalists are popping up these days to cry about immigrants, and how minorities have done them wrong. and how "The Jews" are controlling the media, and being all blah blah blah "white genocide" and "anti-racist is code for anti-white" and "white history month" and "white lives matter" and what have you. However, it seems as though these people -- the "alt-right" ones and others -- are far more interested in congregating online on Breitbart "News," 4Chan and Reddit, and hiding behind Eggs and pictures of Keanu Reeves in "The Matrix" on Twitter than they are in getting out of their houses and having a good old fashioned cross burnin'. Plus, how would you even fit a Klan hood over a trilby?

Also, despite the fact that these people may repeat the exact same rhetoric as Klan members, they absolutely reject the idea that they are racists. They will say they are "race realists," they say they are just saying racist things for the "LULZ" and to get a rise out of the "PC SJW LIBTARDS," they say they are only defending themselves against a culture that has demonized them for being white, etc. etc. The real racists, they will insist every time, are black people and other minorities. They want their views legitimized, to be the status quo -- which is what they believe Trump will do for them. They're probably not going to go and join up with a group like the Klan that they feel will de-legitimize them. At least a good portion of them, anyway.

Still, the Grand Dragons and Uber-Cyclopses or whatever are looking forward to the days ahead -- particularly with a Republican presidential candidate who appears to be reading straight from their playbook!

Stopping immigration, not blocking minority rights, is the Klan's No. 1 issue today, Waller said. His group operates by the KKK rulebook called the "Kloran," which was first published in 1915. Various versions of the book are now online, and an edition posted by the University of Wisconsin library states in part: "We shall ever be true in the faithful maintenance of White Supremacy and will strenuously oppose any compromise thereof in any and all things."

The current hot-button issue for Klan members - fighting immigration and closing U.S. borders - is one of the most talked-about topics in the presidential election. Klan leaders say Donald Trump's immigration position and his ascendancy in the GOP are signs things are going their way.

"You know, we began 40 years ago saying we need to build a wall," Arkansas-based Klan leader Thomas Robb said.

Huh, so basically what they are saying is that Donald Trump is kind of like the Dane Cook of racist rhetoric! Not the Carlos Mencia though, what with him being a Spanish and all.

As of right now, there are only about 3,000 Klan members in the United States -- which is about 3,000 too many, if you ask pretty much anyone who is not a member of that group. You wouldn't think, having their reputation, that they will ever be able to increase that too much. Though most of us probably never thought that Donald Trump would be running for president either, so never say never. Yeesh.