Know Your Wrays: Fay Was In 'King Kong,' Chris Is Trump's FBI Nominee 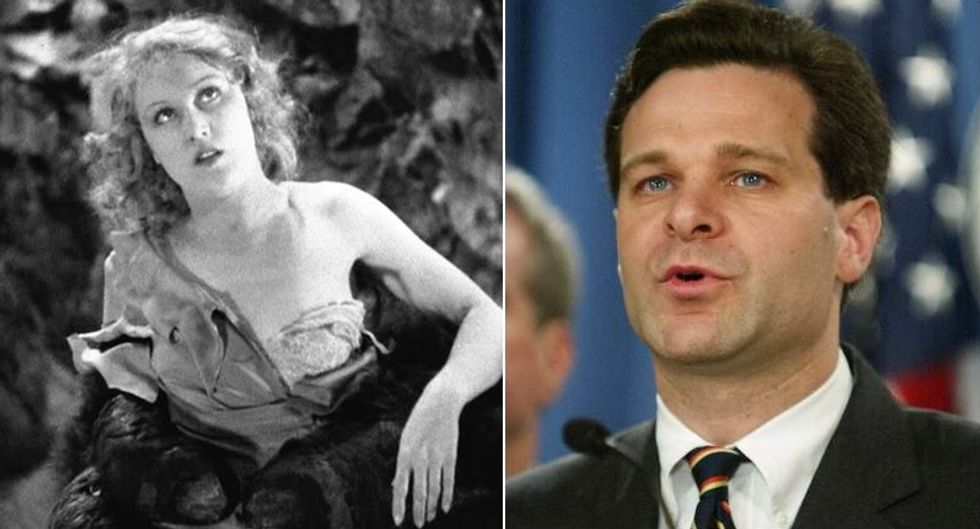 Both are best known for working with large angry primates.

Donald Trump, in his infinite wisdom and paranoia, dropped his announcement Wednesday morning that he'd chosen a new FBI director through his preferred communications medium, Twitter. Now we know why Sean Spicer clarified yesterday that Trump's tweets should be considered "official statements." So, here's an official presidential statement:

Perhaps Spicer just made a lucky guess, since Trump didn't bother telling his communications staff about the pick in advance, which would explain why, unlike most administrations, the Trumpers didn't provide a fact sheet on who the hell this Christopher Wray guy is.

One senior administration official said “of course not” when asked by The Daily Beast whether top communications staff such as press secretary Sean Spicer and his deputy Sarah Huckabee Sanders were informed that the president would be tweeting out the news about Wray on Wednesday morning, sans a basic press strategy in place.

Did Trump bother telling top members of Congress, who might be rather interested in the choice, since the Senate has to confirm the guy? Nahhhh:

Trump probably told someone about his decision, but the Daily Beast's rather limited sample of six administration officials didn't find anyone who was told about the choice in advance:

“We woke up to this,” one official said. “[Everyone in the White House] should all be used to this by now...This is how [Trump] operates.”

Asked after the president’s Twitter announcement whether the White House had prepared any material promoting Wray and his nomination, one staffer simply replied, “Something will be put out.”

And hey, just four hours later, they put something out!

So who the hell is this Christopher Wray guy, and is he related in any way to Fay Wray, the star of the 1933 classic, King Kong? As far as we can tell, there's no relation, but people may mix up the two anyway, so let's clear up any confusion, shall we?

Infrastructure looms large in both Wrays' careers. While Fay was imperiled by Kong's angry ascent of one New York City landmark, Christopher Wray represented the imperiled governor of New Jersey in the Bridgegate scandal. While Fay mostly screamed throughout the whole movie, Christopher helped Chris Christie escape prosecution for allegedly losing his temper and ordering lanes closed on the George Washington Bridge after the mayor of Fort Lee, New Jersey, refused to endorse Christie for governor. Fun fact: While the movie's Kong was merely a stop-motion puppet, Chris Christie is an actual human being and longtime friend of Christoper Wray since the Bush administration. Christie approves of the nomination:

When I had to retain legal counsel during a very, very troubling, confusing, difficult time for me, I made one phone call, and that was to Chris Wray. So I can’t give a better recommendation than that. I think the President of the United State should be commended. He did a deliberative process. He met lots of people from what I understand.

Say, Gov. Christie, that sounds like a ringing endorsement of Chris Wray as a defense attorney. Did you know that the job Wray's been nominated for is FBI director? Can we at least pretend those are supposed to be different jobs?

Foreign entanglements, too! Fay Wray didn't really leave the United States during the filming of King Kong, and Skull Island is not a real place, just like "Russia." Christopher Wray works at the law firm King & Spalding, which represents the Russian state-owned oil company Rosneft, although it doesn't appear Wray has been involved in any way with his firm's work for Rosneft, which is handled by King & Spalding's Moscow office. Remember, tangential connections to Russia just pop up all the time in everyday life. Our son just bought a used car, and darned if there wasn't a Russian oil executive in the trunk. Lucky thing the car only had one previous owner!

Fay Wray fell in love with her simian captor, but tried to escape. Chris Wray has a mixed record with independence, too!

[wonkbar]<a href="http://www.wonkette.com/617248/that-time-james-comey-kicked-george-w-bushs-ass-on-warrantless-spying"></a>[/wonkbar]Yeah, yeah, you're as tired of the lame framing device as we are. Here's the thing: Christopher Wray may or may not be as fully independent as a good director of the FBI is supposed to be. The Good: when he was an assistant attorney general during the Bush administration, Wray was among the colleagues of James Comey and Robert Mueller who opposed the Bush administration's warrantless wiretapping program, and was willing to resign in protest if the administration ignored Justice Department recommendations to modify it:

Wray apparently was unfamiliar with the highly secretive program, but got wind of the escalating clash. He stopped Comey in a hallway, according to [Barton Gellman’s book Angler], and told the then-acting attorney general: “Look, I don’t know what’s going on, but before you guys all pull the rip cords, please give me a heads-up so I can jump with you.”

So, maybe not one to go along with bad administration decisions. Over at Lawfare, Harvard professor and former Assistant Attorney General for the Office of Legal Counsel Jack Goldsmith says Wray should be fine:

Wray is smart, serious, and professional. He doesn’t have quite the range of experiences that his two predecessors did. But he has deep experience with federal criminal law and the FBI. I think Trump’s firing of James Comey was a travesty. But Wray is a good choice, a much better choice than any [...] of the politicians I previously saw floated, and a much better choice than I expected Trump to make.

BUT, there's also The Not So Good: According to journalist Marcy Wheeler, who writes about national security and civil liberties, Wray's name shows up in a lot of completely-redacted documents in the ACLU's torture document database, and he "was involved in one of the noted field trips to Gitmo to watch torture." Of course, his name being included in the header of a completely redacted document only indicates that the information was classified, not necessarily that he was a thug. On yet another hand, he was picked by Trump, who likes thugs and torture.

Also of concern to Wheeler: while Wray was at the DOJ during the investigation into the leak of Valerie Plame's name, he "provided inappropriate briefings to John Ashcroft about what Ashcroft’s buddies had said during FBI interviews." That doesn't sound so good.

According to The American Prospect, Wray briefed Ashcroft on an FBI interview of Karl Rove, a longtime friend of the then-attorney general:

The briefings raise questions about the appropriateness of Ashcroft's involvement in the investigation, especially given his longstanding ties to Rove. Senior federal law-enforcement officials have expressed serious concerns among themselves that Ashcroft spent months overseeing the probe and receiving regular briefings regarding a criminal investigation in which the stakes were so high for the Attorney General's personal friends, political allies, and political party. One told me, "Attorneys General and U.S. Attorneys in the past traditionally recused for far less than this."

That incident led Ashcroft to finally recuse himself from the Plame investigation. It's not a great precedent for a president who really wants to stick his nose into what are supposed to be independent law enforcement investigations:

In short, it seems Wray is likely to ensure that highers up never see any consequences for their actions. And he sure seems likely to keep Trump in the loop on the investigation of Trump.

Good thing the Russia investigation is being handled by a special counsel, huh?

Yr Wonkette is supported by reader donations, just like Fay Wray was held tightly by Kong. Please click the "Donate" linky below!