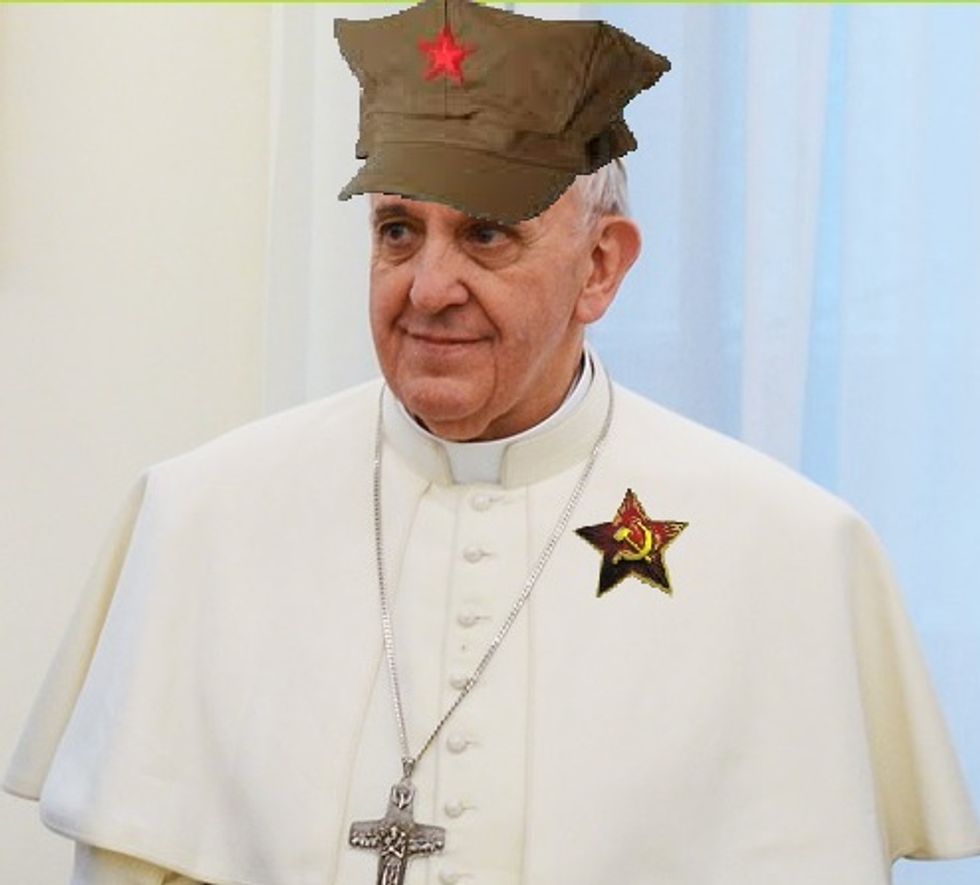 While most of the world is trying to figure out what to do about this whole climate change thing before it's too late and we are all OOPS! dead, the concerned citizens at the completely objective Heartland Institute, which happens to be funded by the also very objective Koch brothers, are looking out for more important things, like teaching Pope Francis that God loves pollution:

“The Holy Father is being misled by ‘experts’ at the United Nations who have proven unworthy of his trust,” said Joseph Bast, president of the Heartland Institute. “Humans are not causing a climate crisis on God’s Green Earth – in fact, they are fulfilling their Biblical duty to protect and use it for the benefit of humanity. Though Pope Francis’s heart is surely in the right place, he would do his flock and the world a disservice by putting his moral authority behind the United Nations’ unscientific agenda on the climate.”

The poor dumb pope is under the impression that there are "moral and scientific grounds" for taking action on climate change and is planning to instruct Catholics around the world to do that. But that's because he hasn't heard the other side yet.

So the Heartland Institute is graciously sending "real scientists" to explain to him, ahead of an environmental summit at the Vatican, why the 97 percent of not real scientists who agree that climate change is real are wrong. Those greedy posers who pretend to have the science to back up such claims don't understand how science works, and they certainly don't understand the Bible. Not like the Heartland Institute does. That's why it had a billboard campaign a few years ago to inform people that if you believe climate change is real, you're just like Unabomber Ted Kaczynski. You don't want to be like Unabomber Ted Kaczynski, do you, New Pope?!?!

As we already know, those few scientists out there, like Wei-Hock Soon, who are happy to tell us climate change is no big deal are sometimes funded by, coincidentally, the very gas and oil industries that contribute to climate change -- like, say, Koch Industries. And they write up opinions for the Koch brothers at their various think tanks and "grassroots" organizations to insist that climate change, if it exists at all, is good for you. Like toxic sludge!

Not that the Koch brothers want to fess up to any of that. When Congress decided to look into the $1.2 million Wei-Hock Soon had collected over the years, the Koch brothers told Congress to shove it because the First Amendment protects their right to buy scientists and make them write reports that are plainly false. That's probably in the Bible too.

Hopefully, the Koch brothers' favorite scientists can sort all of this out for the pope and show him the evidence that shhhhhhh, there's nothing to worry about when it comes to pollution and greenhouse gas emissions, and trying to do anything about it would simply be "a radical reordering of global economies that will cause massive reductions in human freedom and prosperity." You don't want to reduce human freedom and prosperity, do you, New Pope?!?! (Well, actually, yes, because New Pope is a total commie Marxist who loves the dirty poors more than the noble rich, what a jerk.)

Anyway, the pope, whose understanding of humans' Biblical duty is tenuous at best, will certainly see reason once the scientists lay out the scientific evidence that science is bogus. And besides, like it says in the Bible, it's a sin to leave too much Nature on your plate when Jesus comes to clear the table.