Kris Kobach Already Has Plans To Suppress Voting, So Why Bother With Fraud Commission? 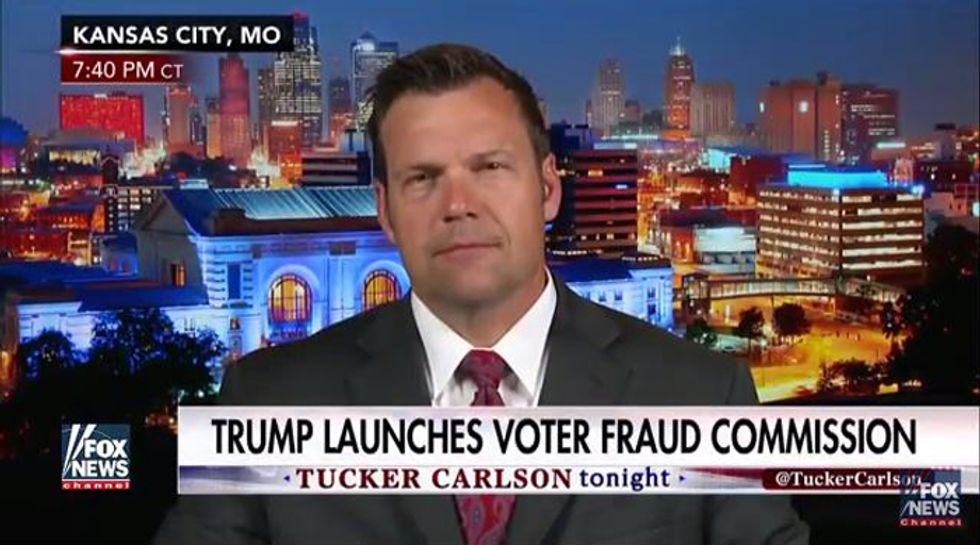 Kobach and try it again

Now, don't you crazy liberals get any kind of ideas that Kansas Secretary of State Kris Kobach, vice-chair of Donald Trump's voting fraud commission, is treating the commission's "investigation" as cover for some kind of national attempt to restrict voting. That would be very unfair of you, even though he was already pushing ideas to make voting harder in a November 2016 email he sent the Trump transition team. He never actually wrote up a plan, so he's now perfectly objective, don't you see?

In the email, dated the day after the election, Kobach replied to transition team member Gene Hamilton, who had asked Kobach to help put "a package of things together" for fixing voting. Kobach was delighted to help, because he already had some terrific ideas for changing the National Voter Registration Act (NVRA):

The NVRA, or "Motor voter" law, is the the pesky federal law that keeps getting in the way of his brilliant plan to require proof of citizenship for all first-time voter registrations in the state. Amend the NVRA, and those darn lawsuits go away! The email was one of several documents released Friday as part of an ACLU lawsuit against Kobach's brilliant state law.

Now, before you all go saying that the fix was in, and that Kobach already has a plan to gut the NVRA's protections for voters even before the commission meets, keep in mind this caveat from his attorney:

In a July 7 email to the ACLU also filed as part of court documents, Garrett Roe, Kobach’s attorney, noted the November email only referred to the possibility of a draft NVRA amendment and that the draft was never sent.

See? He only wants to gut the NVRA real bad so the ACLU can't let any undocumented Tomas, Ricardo, or Javier waltz into your voting booths straight from the border and steal your elections, like he knows they already do. He hasn't actually written down any such plan, so maybe he's going into this commission thing with an open mind, and will objectively assess the evidence for the first time in his life. All he wants to do is make absolutely certain that the vote is fair, and that only citizens are voting:

Kobach told the Daily Signal last year that every time an illegal immigrant votes, "it effectively cancels out a vote of a U.S. citizen," and said there is "huge potential" for those votes to alter the outcome of an election.

"Even if it’s just a handful of votes, it's still a huge injustice," he said.

Except, it turns out that we're talking about an extremely tiny handful. Like, even smaller than a short-fingered vulgarian's hands:

"Based on state prosecution records, votes by noncitizens account for between 0.0003 percent and 0.001 percent of all votes cast," according to an analysis by the Brennan Center, a non-partisan think tank that works to expand voting access.

Conversely, a national survey sponsored by the Brennan Center in 2006 found that millions of Americans do not have access to documentary proof of their citizenship. In Kansas, thousands of voter registrations have been refused or put "on hold" because of failure to provide proper documentation under Kobach's SAFE Act.

OK, but those studies are obviously flawed, because they don't account at all for the two or three million illegal immigrants who Donald Trump knows voted for Hillary Clinton. If the studies don't bear out that number, then obviously the studies are wrong, because where would Donald Trump get a big number like that? Other than from his good friend Kris Kobach, who Kellyanne Conway confirmed was the source of Trump's worry about those millions of illegal votes.

Congratulations, Texas! No Way Will This 101-Year-Old Lady Do Vote Fraud Now!

Some wild-eyed radical liberals who support voting rights for ISIS (or at least old black ladies) seem to think the email confirms their preconceived notions about Kobach:

Critics of Kobach say the email proves the voter fraud commission is aiming to restrict voting access regardless of any findings it may make. "I think the email is wholly unsurprising," said Justin Levitt, elections expert at Loyola Law School."I won't be shocked as more proof emerges that the cake is already baked."

That doesn't seem very objective at all. Maybe Kobach will only want to restrict voting access a little, like for Democrats but not Republicans. Where's your sense of compromise?

In any case, now all Kobach has to do is get his commission to find the evidence of the voter fraud he told Donald Trump is out there. After that carefully designed effort proves he was right all along, then and only then will Kris Kobach recommend changes to the NVRA so everyone in America will have to jump through a tinier, Republican-shaped hoop in order to register to vote. You have to let the scientific method run its course, before you do what you planned to all along, don't you know.

Yr Wonkette is supported by reader donations. Please click the "Donate" clicky below.