Kris Kobach: These Rats Aren't Going To Fuck Themselves! 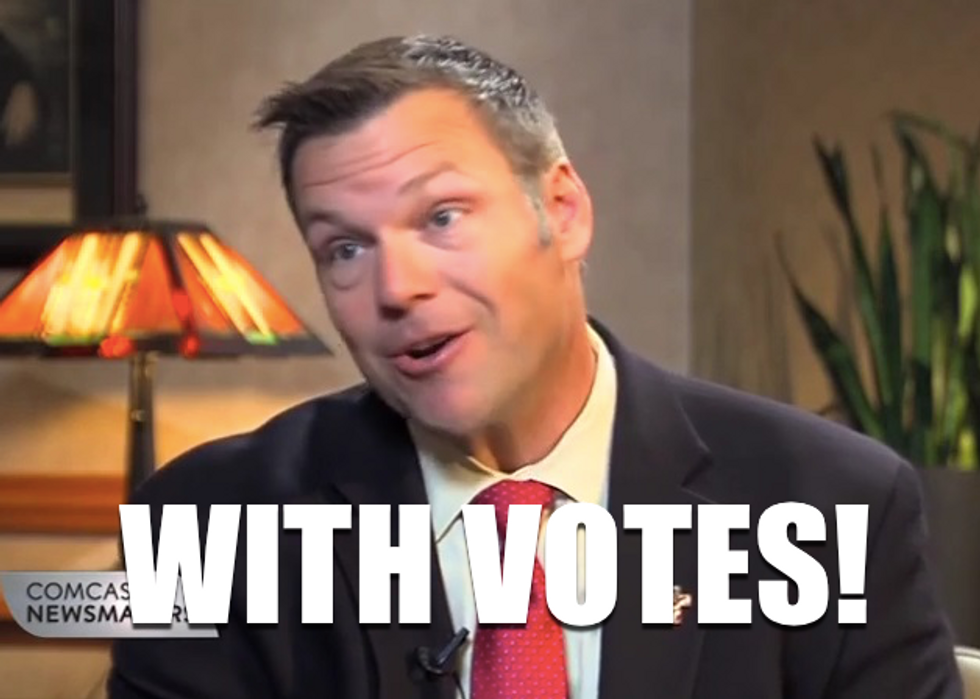 The Presidential Advisory Commission on Electoral Integrity is off to a roaring start! Can't you just feel the integrity? When Donald Trump's existential need to prove that HE DID TOO win the popular vote met Kansas Secretary of State Kris Kobach's lifelong dream of taking his ratfucking agenda nationwide, they bumped their uglies and produced the PACEI. Lo, unto us a child is given!

Right out of the gate, Kobach sent letters to all 50 secretaries of state plus DC, ordering them to send all their voter data ASAP, mmkay? All he wants are the names, addresses, birthdates, social security numbers, voting history, party affiliation, military status, and criminal history of every voter in their jurisdiction. Kobach's letter also stated, "Please be aware that any documents that are submitted to the full Commission will also be made available to the public." Just a publicly searchable database with everyone's DOB and SSN -- NBD, right?

Democrats all responded with some version of, "Fuck off and die!" A few Republicans got salty, too, including Mississippi's Secretary of State Delbert Hosemann, who told Kobach, "My reply would be: They can go jump in the Gulf of Mexico, and Mississippi is a great state to launch from." Most states agreed to send public voter rolls, but refused to disclose social security numbers or dates of birth, which would violate privacy laws. Even Kansas's Kris Kobach told that big-gubmint liberal Commission Chairman Kris Kobach that he could pry those SSNs from his cold dead hands.

One theory is that Kobach is running an elaborate scheme to make the states look like they're covering up massive vote fraud. Which works well with low-information voters.

Another theory is that Kobach wants a barebones database with only names and birthdays that will produce a lot of false positives. A 2017 study showed that comparing state voter rolls with just a few data points would yield 200 false positives for every real double vote. Sure, they'll catch a lot of Michael Smiths. But think of all the Miguel Rodriguezes and Jamal Robinsons they can put on the No Vote List! Plus, they'll be able to scare the rubes with stories of MILLIONS of fraudulent and illegal votes. So worth it!

But right now, poor Kris Kobach has no data to ratfuck with. Weak!

What he does have is lawsuits. Lot and lots of lawsuits. Everybody and their lawyer wants a piece of poor Krissy.

The first suit was filed by the Electronic Privacy Information Center (EPIC) in the federal District Court for DC. EPIC pointed out that Kobach had instructed the states to send their data to a totally unsecure website.

"Fiiiine," said the PACEI. "Send all that personal voter data to the Department of Defense 'til we can get our shit together at the White House." To which EPIC responded, "Try again, dipshits! Government agencies have to do a privacy impact study before they collect personal data."

"Whatever, losers!" sighed Kris Kobach. Yesterday, Kobach asked the states not to send him any more data until he gets the go-ahead from the court and finds himself a nerd to build a secure website.

Kobach even agreed to scrub the data he got from those brownnosers in Arkansas who tried to kiss up by turning in their homework early. Kobach is super good at law.

The PACEI vote suppression gang is also being sued by the ACLU and the Lawyers' Committee for Civil Rights for violating federal open meetings laws. Pro tip: If you specify in your executive order that, "The Commission shall hold public meetings," you should probably hold public meetings. (You should also not hide memos on that commission and then be fined $1000 personally for having done so).

At the same time, Public Citizen is suing PACEI and the DOD for violating privacy laws by hoovering up so much personal data.

Oh, and the Lawyers' Committee is also suing Kobach personally for violating the Hatch Act's prohibition on using a government position to campaign for office in his bid to become governor of Kansas.

Specifically, Kobach has repeatedly and conspicuously touted his Commission role to promote his candidacy—and to solicit campaign donations—on his campaign website, on his official campaign social media accounts, and in his public appearances. The Lawyers’ Committee has filed complaints with the Office of Special Counsel and the Office of Government Ethics alleging that these actions violate the Hatch Act and federal ethics rules, since Kobach holds the status of a special government employee as Vice Chair of the Commission.

Kobach's spokeswoman Samantha Poetter channeled her inner Kellyanne: "This is nothing but a bunch of liberal lawyers trying to create a story." (Psssst, Samantha! You forgot to blame Obama!)

Yesterday, nine secretaries of state sent a letter to Kobach's goon squad warning him that they see his bullshit, and they are NOT HAVING IT.

We harbor deep concerns about any proposals to reallocate state jurisdictions' authority in the administration of elections. We are keenly aware of recent developments in FBI, CIA and Department of Homeland Security investigations of foreign intrusion in the 2016 General Election, post-election unfounded allegations and claims of widespread voter fraud emanating from the Executive, and the recent formation of the Presidential Commission on Election Integrity. These actions seem to indicate an unprecedented intrusion into local and state election administration processes by the Federal government and gives us pause as we consider whether the true intent of this federal action is to pre-empt state and local management of elections in the future.

Which is a nice way of saying, "Bitch, don't make us sue you!"

So, this is all going well. We're going to do fuck all to protect voting machines from Russian hackers. But we'll get to watch this Keystone Cops Commission on voter integrity get kicked in the nuts by the Courts while Hannity screams about it to avoid covering Trumpworld's implosion.

Yes, yes, you can all go back to Don, Jr. now! But first throw some money at us, okay?