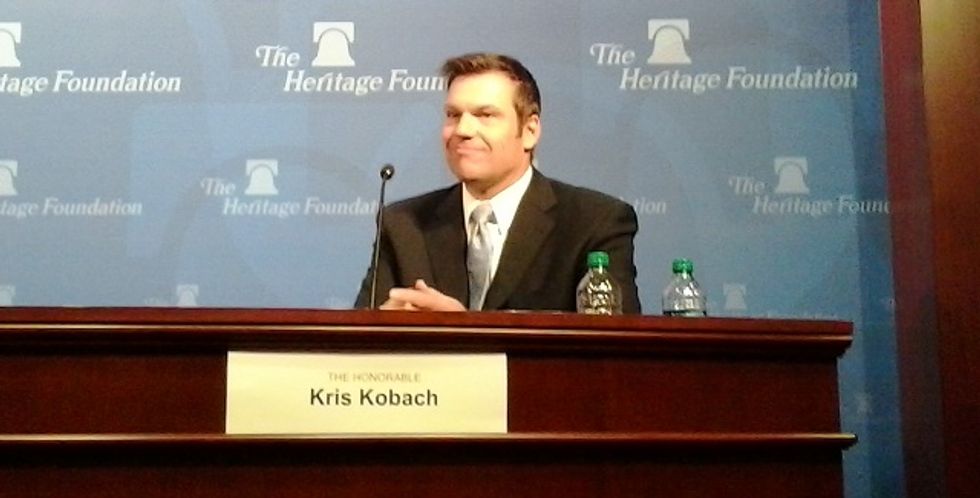 Voter fraud is so hot right now. This year's midterm elections are only a few weeks away, and courts are still ruling left and right on the identification requirements that states can impose on their voters as a remedy to the virtually non-existent threat of voter impersonation.

The Heritage Foundation decided to get in on the buzz by having some "experts," including Kansas Secretary of State and voter ID evangelist Kris Kobach, stop by for lunch and a chat, and Wonkette was there to bring you the latest tips for spinning tales of mythical armies of illegitimate voters to justify laws that deprive hundreds of thousands of eligible citizens of access to the ballot.

Kobach is the hardest-working man in the voter suppression business, and it shows: the Government Accountability Office just released an exhaustive report showing that his voter ID initiative helped push down voter turnout in Kansas in 2012. Heritage was lucky that Kobach could take time off from his busy schedule of trying to engineer his state's ballot to be more favorable to his chosen candidate for U.S. Senate, Republican Pat Roberts, while also fighting to hold onto his own office this fall. Kobach's backup singers for the afternoon were Colorado Secretary of State Scott Gessler and Catherine Engelbrecht, all-American oilfield equipment supplier and leader of the right-wing band of voter suppression irregulars True the Vote.

Kobach, while clearly the star of the panel, was too modest to take credit for his brilliance and insisted that the GAO report detailing his success at keeping voters safely away from ballots was "completely flawed." The drop in turnout among Kansas voters in 2012, the first election under his new voter ID restrictions, was no big deal because there was just a silly presidential race on the ballot, which Kris says Kansans don't care enough to vote in because the state is seen as an easy win for Republicans. Apparently, the only thing that can entice those people to come out to the polls is a Senate race, and Kansas didn't have one of those in 2012.

Also, the report generated by the non-partisan GAO was clearly garbage because it did not unnecessarily waste taxpayer money by scraping together the statistics from scratch and instead drew on existing data from a firm where admitted Democrats work and so the whole thing was obviously a product of partisan fabrication.

We have this image of the GAO -- I long had this image, when I was working in the executive branch -- Oh, the GAO, they're this non-partisan group of experts. They're so good and everything they touch is golden. [Palpable sarcasm and disdain here.] Well, the GAO didn't even bother to do its own research. They actually contracted out the number-crunching to an organization known as Catalist. You've heard of Catalist. It's a Soros-funded organization created by Harold Ickes, a former Clinton aide, to help the left-wing groups get out the vote... Their past use of numbers has been highly suspect.

Soros, Clinton, Democrats, oh my! And you know those "research" firms and their "numbers." Highly suspect!

Colorado Secretary of State Scott Gessler, after lamenting that he did not have the conservative legislators Kobach was blessed with in Kansas, criticized his state's new law to increase the use of mail-in ballots. This is no way to vote! Did you know that when you mail something, your mailman does not pick it up with white gloves and carry it directly to its destination? This unconscionable delay in transporting ballots made the post office "the greatest vehicle for disenfranchisement in the country."

Gessler also laid out a novel rebuttal to arguments that the minuscule number of voter fraud cases brought to trial indicated an extremely rare phenomenon that did not warrant preventing hundreds of thousands of eligible votes being cast. He wanted to correct the impression that it wasn't a problem in Colorado since his state's numbers reflected lazy or biased district attorneys wasting the hot tips passed to them by Gessler's office just because, even after lengthy and expensive investigations by the DAs, there wasn't enough evidence to prosecute.

Unfortunately, a lot of times in elections, people's common sense just gets thrown out the window. We don't measure our murder rate based on the number of successful prosecutions. We look at the number of dead bodies in the street, as it were.

In addition to the uncounted electoral corpses littering Colorado, Gessler also warned of the dangers of migratory "gypsy voters" or, more precisely, gypsy voter, since he could only cite one case in which a guy from Boulder supposedly signed a fake lease in Colorado Springs to vote there (as a publicity stunt, claiming he cast a blank ballot).

And then Catherine Engelbrecht got up and talked about how important it is to have untrained "observers" haunting around polling places in minority neighborhoods, if only to act as a shield against the erosion of our morality as a country.

"If citizens don't care enough to get involved," she said, "what you see is oftentimes common sense just sort of slip away. I feel like that's kind of where we are headed as a culture in many ways, but certainly as it relates to our voting process."

Because these were humans speaking on a panel, they all talked too long and ate up the time allotted for Q&A. Luckily, we were sitting very close to the front and barged up to put a few questions to Secretary Kobach before he could escape. He confirmed that yes, his state had created a sub-class of Kansas voters who'd registered with a federal form that he didn't think went far enough to root out illegal aliens, and those voters would only be allowed to vote in federal elections and not for state races like governor (or secretary of state, for that matter). And yes, he agreed with Gov. Scott Walker's comments in the Wisconsin gubernatorial debate that the threat of even one illegitimate vote could justify stopping any number of qualified voters, even a hundred thousand. People need to have confidence in the electoral process, even if they are wrongfully barred from participating.

And then we got him to autograph our copy of the GAO report, swiped the grapes from the cookie platter in the lobby, and fled back to the outside world before the Heritage stooges circling the room could seize our photo-filled phone as allowed by the draconian terms for accepting free tickets to their enlightening events. We don't want to wind up in Heritage Foundation jail.

You can follow Beth on Twitter for real-time updates on the wave of electoral crime sweeping the nation!