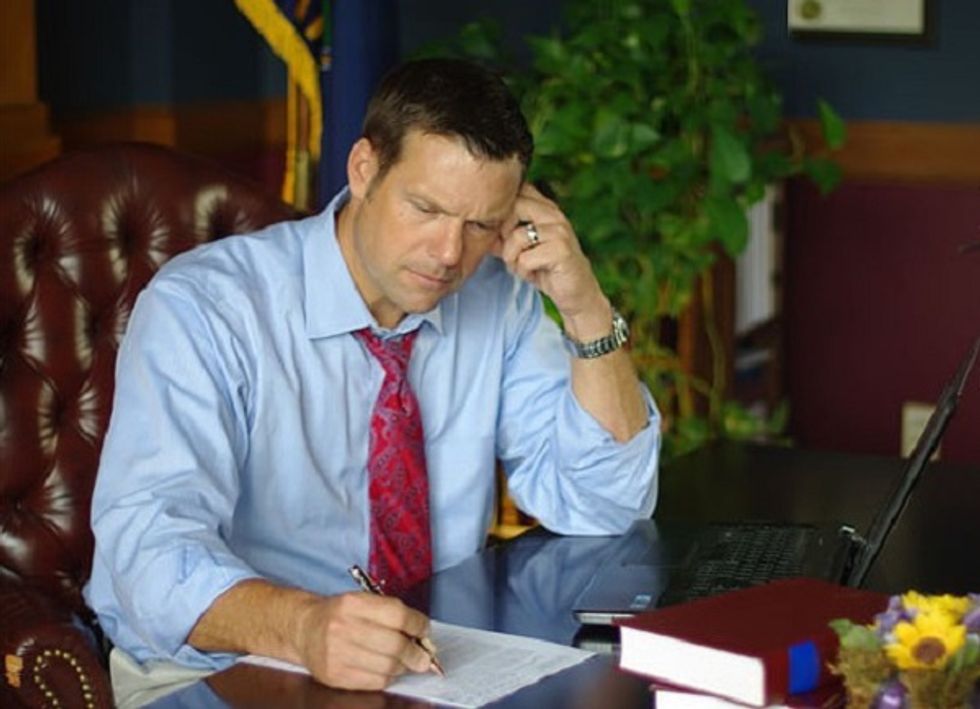 Kris Kobach, the co-chair of Donald Trump's glorious Find The Five Million Illegals Who Voted For Hillary Commission, has been running into a bit of pushback to his letter asking all 50 states to submit detailed voter information to be used in a great big study that would supposedly root out all the voter fraud. At least 25 states have said they won't or can't comply -- or will not submit all the data Kobach requested, either because they're restricted by state law, or they don't trust the commission, which is expected to skew the data to support Republican claims of massive voter fraud, and to recommend restrictions on voting rights.

Among the states that won't be giving the "Presidential Advisory Commission on Election Integrity" all the data Kris Kobach wants is Kansas, where Secretary of State Kris Kobach explained that under state law, he can't release the last four digits of voters' Social Security numbers. The state will release all other information requested in the letter, like voters' names, addresses, dates of birth, voting history, party affiliation, and felony criminal history. Kobach explained,

Kobach did hold open the possibility that Kansas might find a way to release the SSN data later, maybe:

“If the commission decides that they would like to receive Social Security numbers to a secure site in order to remove false positives, then we would have to double check and make sure Kansas law permits,” Kobach said.

“I know for a fact that this information would be secured and maintained confidentially,” he added in response to security concerns.

He happens to personally know the commission's co-chair, after all, and he trusts Kris Kobach not to pull any funny stuff.

Several other states, however, know exactly who Kris Kobach is, and have decided not to play along with Kobach, like Virginia, where Gov. Terry McAulliffe issued a statement saying

This entire commission is based on the specious and false notion that there was widespread voter fraud last November [...] At best this commission was set up as a pretext to validate Donald Trump’s alternative election facts, and at worst is a tool to commit large-scale voter suppression.

Mississippi Secretary of State Delbert Hosemann, a Republican, was a bit more blunt. His statement not only said Mississippi wouldn't comply with the request for voter records, he also told Kobach that while he hadn't yet received the letter, based on the copies he'd seen, his reply to the commission would be "They can go jump in the Gulf of Mexico and Mississippi is a great state to launch from."

In 2014, the vote-fraud panic group True the Vote sued Hosemann, the state, and the Mississippi Republican Party in an effort to prove that Senate incumbent Thad Cochran's primary win over teabagger Chris McDaniel was the result of voter fraud. As you may remember, the teabagging True Believers were absolutely certain Cochran could only have won by buying black votes or at least being more appealing to black voters than the neo-Confederate grifterweasel McDaniel. So in the fallout after that primary, True the Vote sued to get complete voter information, including birth dates; Hosemann and the state contended that would breach voters' privacy, and won in court. So Hosemann is no fan of his own party's Too Many People Are Voting wing.

'Voting' sure was nice while it lasted.

As we noted yesterday, Never Trust Kris Kobach is a good rule of thumb; the guy has a reputation for playing fast and loose with statistics whenever they can be manipulated to make voter fraud look likely, or even possible. The "Crosscheck" computer system Kobach developed is notorious for false positives, making it look like someone is registered to vote twice, when in fact it's found two different people. All you need are two people with the same first and last names and a shared birth date, and there's your voter fraud -- and if the states using Crosscheck didn't input middle names or initials, it sucks to be both Carol A. Washington and Carol C. Washington; both may have their registration challenged.

Now, here's where things get sticky for states facing Kobach's request: Refusing to comply at all is probably the best choice, because the commission doesn't have subpoena power, and the more states that tell Kobach to go jump in a nearby body of water, the better, even if they risk a pissy tweet from that man in the White House:

But that's fine, the man's an idiot. Most states that are pushing back, however, are doing so by submitting only names and maybe addresses, while withholding dates of birth or partial SSNs. Wisconsin's elections commission administrator, for instance, said the state would be happy to sell the commission its voter data at the same rate it does for political parties: $12,500. We think that's pretty darn good trolling, but here's the problem with partly complying with Kobach's request: if the birthdate or Social Security data isn't included, that's going to lead to even more false positives, which will give Kobach exactly what he wants: bogus "evidence" of possible voter fraud, thanks to all those people who share names, and for whom there's no additional data to separate them. As data analyst Mark Swedlund said in Rolling Stone's indispensable story on Crosscheck last year, the methodology of Crosscheck is "childish" because it seems designed to produce false positives:

God forbid your name is Garcia, of which there are 858,000 in the U.S., and your first name is Joseph or Jose. You're probably suspected of voting in 27 states.

So it's a hell of a dilemma: resist altogether, which is smart but takes a bit of political courage -- and gives ammo to the morons insisting there are millions of hidden illegals voting; share all the requested data, which would reduce (but not eliminate) false results but would also grant legitimacy to Kobach's efforts; or share partial data, which would play into the shoddy methodology Kobach and his allies have already used to disenfranchise tens of thousands -- or more. It's a no-win situation, a regular Kobachyashi Maru scenario.

In any case, voting sure was nice while it lasted.