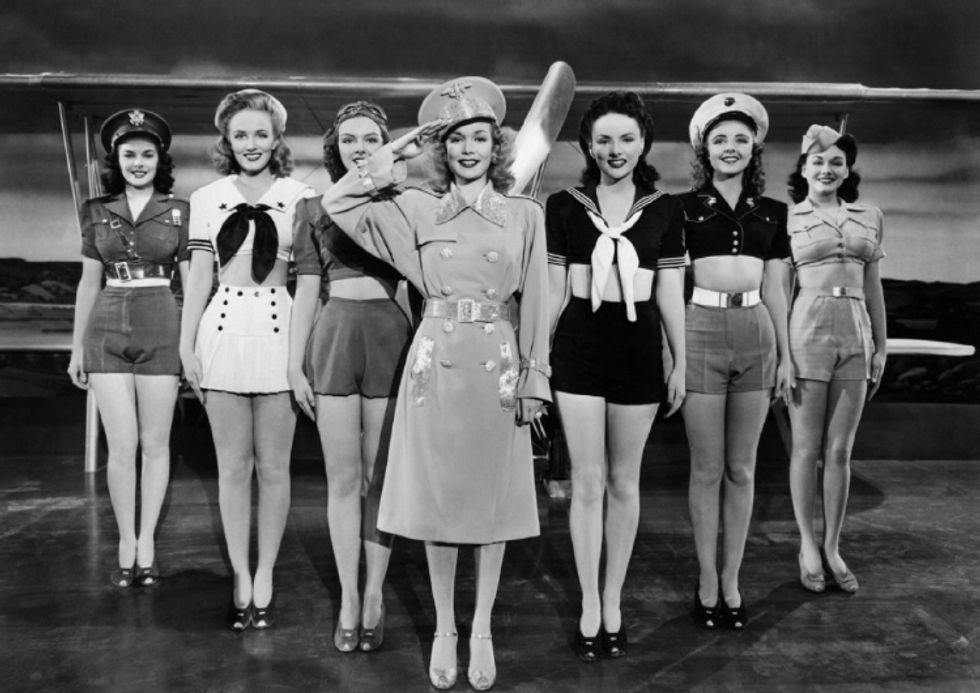 Before the Delta Force, there was the Gam Squad

Congratulations, women of America! You now have the right to serve your country in combat roles in whatever terrific new war President Trump or Clinton thinks is necessary to protect America's vital national interests! Secretary of Defense Ash Carter made the announcement last week, the final step in a process started by President Obama in 2013. Of the four armed services, only the Marines requested an exception to the new rules, and as it happened, Marine Corps Gen. Joseph Dunford, chairman of the Joint Chiefs of Staff, was for some reason unable to join Secretary Carter at the event. Dunford may or may not have been pouting. In any case, Carter said, "There will be no exceptions."

In what may not have been the most well-chosen phrasing, Carter said (and we swear we are not making this up) that the military must draw from "the broadest possible pool of talent" in assigning personnel to combat roles. It is not known whether he snickered.

President Obama, in a statement, compared the change to the desegregation of the military and to the end of "Don't Ask, Don't Tell," and said that women had already proven themselves in combat in Afghanistan and Iraq.

As Commander in Chief, I know that this change, like others before it, will again make our military even stronger. Our armed forces will draw on an even wider pool of talent. Women who can meet the high standards required will have new opportunities to serve.

Yes, that's a better way of putting it.

Some Republicans reacted to the news by hinting, darkly, that since women may now be assigned to combat roles, maybe they will be required to register for the draft, and how do you like that equality, huh?

“If this goes through, it’s going to be mandated that women be drafted,” said Rep. Duncan Hunter of California, a Marine Corps veteran who served in Iraq and Afghanistan -- and who maintains that women should still be barred from some combat roles. “If you’re going to have women in infantry units, if a draft ever occurred, America needs to realize that its daughters and sisters would be included."

“The reason you draft people,” he added, “is because you have infantrymen dying.”

Rep. Mac Thornberry of Texas and Sen. John McCain of Arizona, chairs of the Armed Services committees, grumbled that drafting women is obviously the next logical step. In a statement, the two said they "look forward to receiving the department’s views on any changes to the Selective Service Act that may be required as a result of this decision.” It is believed that Sen. Crankypants may have muttered "consarn it" as well. Although the draft ended in 1973, men have been required to register with the Selective Service since 1980. A 1948 law explicitly forbids women from being drafted.

In one of those moments of lucidity that makes him seem deceptively reasonable before he insists we start bombing something, senator and "presidential candidate" Lindsey Graham said he has "no reason to object" to the new policy.

"I've sort of, I guess, evolved on this issue, quite frankly," the South Carolina Republican told reporters. "If the military community feels that women are capable of doing this, then I will not stand in the way."

Graham then turned to a map of the Middle East and quietly cackled, "More sacrifices for the Blood Gods, yesssss."

Mike Huckabee was unavailable for comment on whether the new policy would increase military women's demand for boob jobs. We just wanted to remind you all that's a thing he worries about.

Among women in Congress who've actually served in the military, reaction to the new policy could best be described as, "Duh, yes." Iraq vet and Illinois Rep. Tammy Duckworth put it succinctly: "I didn’t lose my legs in a bar fight ... Of course women can serve in combat." We'd like to think that she then went looking for deadbeat former Rep. Joe Walsh so she could kick his chickenhawk ass all over again.

Joining Duckworth in praising the decision were two other women vets who, like Duckworth, also serve on the House Armed Services Committee. Arizona Republican Martha McSally, a former Air Force pilot who was the first American woman to fly a combat aircraft into enemy territory, said:

It’s about damn time ... We are a country that looks at people as individuals, not groups. We select the best man for the job, even if it’s a woman.

And Hawaii Democrat Tulsi Gabbard, who served two tours in Iraq as a medical operations specialist and is still a major in the Hawaii National Guard, where she fights active volcanoes, said the change is "long overdue" and the Defense Department "is finally catching up to the reality of the ways women have been contributing and serving our country." We'd like to believe that Gabbard, Duckworth, and McSally then chased down Duncan Hunter and teased him for being afraid of girls.

The one woman vet in the Senate, Iowa's Joni Ernst, said she supported the policy change but also felt compelled to issue a statement repeating a talking point that critics like to fret about: "I support providing women the opportunity to serve in any capacity, as long as standards are not lowered and it enhances our combat effectiveness." Secretary Carter had already emphasized that women assigned to combat roles would face no different qualification standards than men, but Ernst apparently has a contractual obligation to worry about the slightest whiff of affirmative action at any opportunity. In that, she's proven herself the equal of any Republican man.