Ladies, Stop Offending Ann Romney With How Stupid You Are 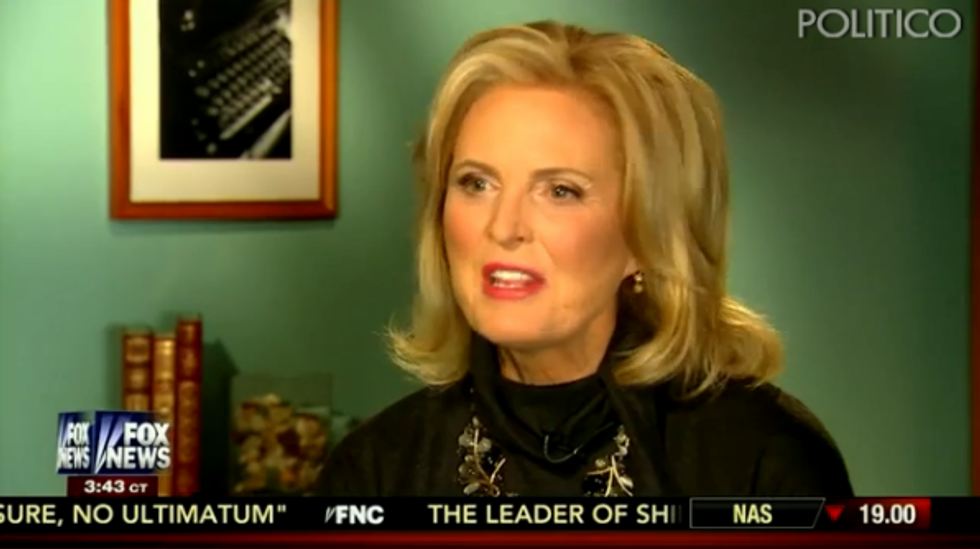 How many times does Her Royal Horse-Riding Majesty Ann Romney have to explain this to YOU PEOPLE? Sheesh! This so-called "war on women" claptrap Democrats can't stop blah blahing about is so dumb and so 2012 and so not even real anyway, so why are women -- who are so much smarter than Democrats think they are -- so stupid as to keep falling for it? HUH?

“It’s ridiculous, honestly, I mean I don’t think they’re getting very far with that, by the way. It’s not going to work. I think women are a lot smarter than that, and that’s kind of offensive to me, to tell you the truth,” Romney said in an interview with Neil Cavuto on Fox News in response to a question about both the so-called “war on women” and DNC chief Debbie Wasserman Schultz’s recent comments about Wisconsin Gov. Scott Walker.

Obviously, talking non-stop about the Republican Party's non-stop assault on women will never work. Ann knows. She's an elections expert. That's why the gender gap in 2012 was only 18 points. Practically a draw! No wonder the whole Romney clan was so very shocked and awed that Ann's 2012 pitch failed to sway the lady voters:

"Women, you need to wake up," she urged them. "Women have to ask themselves who's going to have and be there for you. I can promise you, I know, that Mitt will be there for you. He will stand up for you, he will hear your voices."

Maybe it had something to do with how some of the things that spilled out of her face hole were kind of ... oh, what's the word? Offensive? Like when she said, "I love the fact that there are women out there who don’t have a choice and they must go to work and they still have to raise the kids." Those hard-working women out there were such an inspiration to her because she also had suffered and struggled and worked really hard at never having a job, scraping by on nothing but her husband's daddy's stock portfolio.

How the heck did that not work with voters?!? Especially after she told YOU PEOPLE to stop being so dumb already, jeez, and vote for her hubby. And some of YOU PEOPLE even whispered in her ear that you totally agreed with her (and yet did not vote for Mitt anyway, weird!), and even ladies who usually don't worry their pretty little heads about important issues -- that's Man's Work, after all -- were finally, for the first time ever, thinking about really important stuff, like the economy and "their husbands' jobs."

Seriously, how the HECK did that NOT WORK with voters?!?

WhatEVER, stupid women who are too smart to be this dumb. You may have missed your opportunity to vote for Mitt -- or not, since Ann oh-so-slyly left the door open on the question of whether her husband will actually go for three strikes and he's out in 2016 -- but at least you can vote for that other great feminist hero: Wisconsin's Republican Gov. Scott Walker.

“Scott Walker’s a good guy, and he’s got a wonderful wife, and he values women and that just doesn’t fly,” Romney added.

That definitely settles that. You cannot possibly support policies that are bad for women if you have a "wonderful wife." Just look at the Romneys, after all! Everyone knows that having a wife equals valuing women. That's just Politics 101. Forget everything you know about Scott Walker busting unions that just happen to be lady-dominated coincidentally. Forget about his support for all the restrictions on women's health care his party can think of. Forget that he, like Ann Romney, has said how offended he is by the phrase "war on women" -- about two seconds after he signed a bill requiring women seeking abortions to be vaginally ultrasounded because he really hearts the ladies, don't ya know?

“I find it insulting that you think that voters just care about one or two issues,” Walker said. “But I find that the women as well as the men I talk to in my state, what they want to know was I going to continue to move forward with reforms that will help get our budget balanced, lower our debts, improve our economy, improve our schools, improve higher education.”

Fortunately for Walker, Ann Romney is swooping in to save the day for him, just like she saved the day for Mitt. It'll probably work just as well, too!

But let's make sure it doesn't. Please CLICK HERE to give a few bucks to Walker's Democratic challenger, Mary Burke. Scott Walker's done enough damage to Wisconsin already, and especially to the women of Wisconsin. Let's really insult him, and offend Ann while we're at it, and toss him out of office.