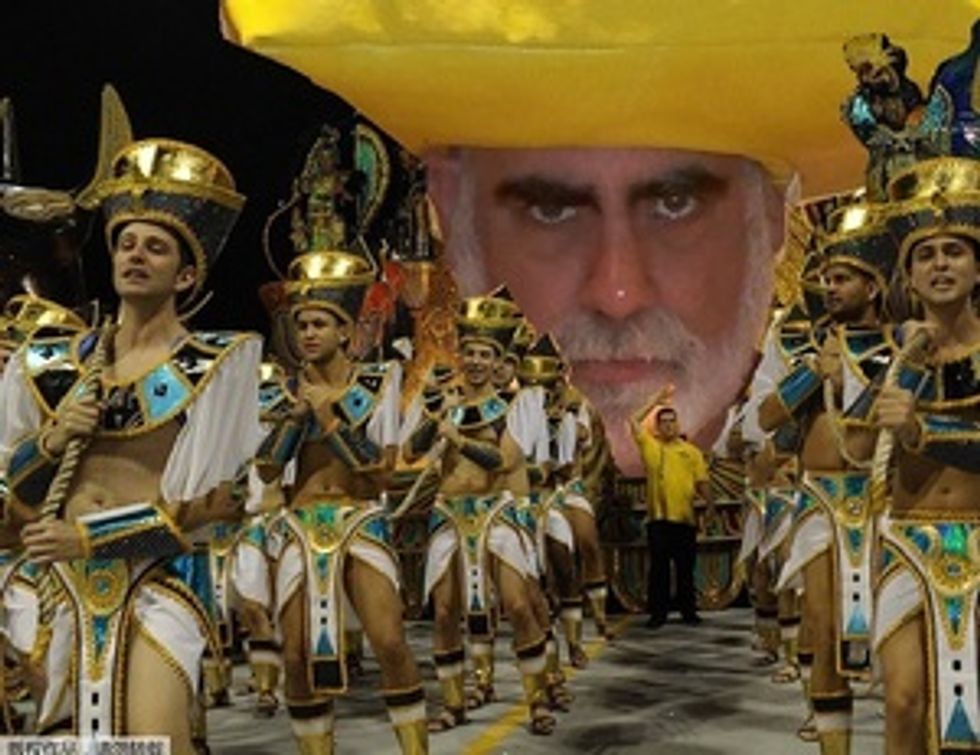 For San Diego's Karen Grube, watching the Rose Parade on New Year's Day "used to be a family thing," but "it no longer is," and it'sbecause of the gays. That's right--there are going to be gays in the 2014 Rose Parade, an annual pageant of crazy costumes, confetti, glitter, dancing, and ostentatious vehicles. And the gays are going to be getting married! On a float sponsored by the AIDS Healthcare Foundation! And the theme of the float is "Love is The Best Protection!" Wow, that is a lot of throat-cramming! Won't you join Karen Grube's boycott? You see, there's a very real possibility that Karen Grube will witness, or learn about, or accidentally imagine gays getting married in the Rose Parade. A very real possibility, people!

How did this happen? Who pooped in Karen Grube's America, where parades are for boys who kiss girls and girls who kiss boys? The Supreme Court, of course, was the pooper, when the justices ruled 5-4 this summer in Windsor v. United States that gays have a Constitutional right to prance, caper, flounce, shimmy, or otherwise frolic in the Rose Parade even if it makes Karen Grube feel very sad and angry and maybe a little... funny inside.

Hey, wait a minute! We just looked it up and apparently Windsor v. United States actually has nothing to do with parades! Tournament of Roses people, are you aware of this? You can save Karen Grube's eyes from seeing gay things if she looks at your parade! All you have to do is tell the gays to get bent. Sure, they might sue, but this is Karen Grube we're talking about here.

Of course, Ms. Grube has some interesting, only-in-California reasoning for you:

Grube said her call for a parade boycott has nothing to with religious convictions.

She said she does not agree with having any marriage — gay or straight — celebrated during the parade.

We are sure. As Ms. Grube said, "it used to be a family thing," not a marriage thing!

And here is a man whose views are less nuanced than Ms. Grube's:

Michael E. Thornton, a retired disabled veteran, said he will not be watching due to religious beliefs.

“Celebrating this ungodly activity is repugnant to me spiritually and I will not support this practice financially by viewing the parade,” he wrote in an email to this newspaper.

Michael E. Thornton wants the Rose Parade to know that it will not be enriched by the dollars that flow from his eyeballs into the pockets of the things he watches.

But despite such coherent and good faith arguments as these, it looks like another defeat for defenders of traditional pageantry:

In a prepared statement, TofR officials said they welcomed the entry — and the wedding.

“Like all of our sponsors and float designers, AHF continues to help make the Rose Parade a premier event through original and creative expressions that connect to parade themes — as this float does,” the statement read.

Today it's just the Rose Parade, but tomorrow, by God, it'll be Broadway--and before you know it, they'll be getting married.