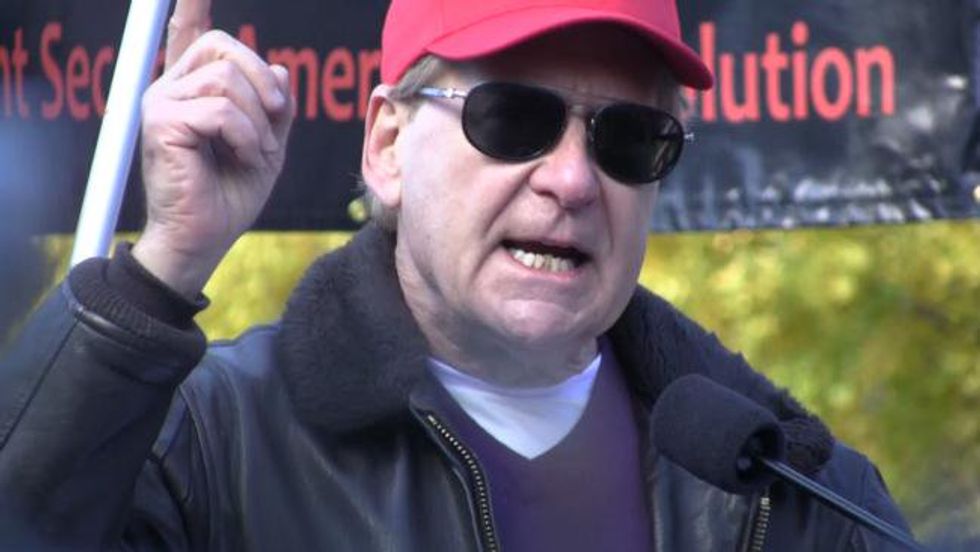 Oh! It's this asshole again!

There were lots of big news stories this week about the lawsuit filed against Hillary Clinton by parents of two of the Americans killed in the 2012 attack on the diplomatic compound and CIA annex in Benghazi. Patricia Smith, the mother of the information management officer Sean Smith, and Charles Woods, the father of CIA security contractor Tyrone Woods, filed a wrongful death lawsuit against Clinton Monday, claiming that her use of a private email server was somehow the direct cause of their sons' deaths in the terrorist attack. The lawsuit also throws in a defamation claim against Clinton for good measure, accusing her of making “false and defamatory statements negligently, recklessly and purposefully and/or intentionally with malice” in her public statements about Benghazi.

There's just one important detail that a number of news reports tended not to mention, or in some cases underplayed: the lawyer in the case is conspiracy theorist, Wonkette frenemy, and all around nutjob Larry Klayman, who has made something of a career out of filing completely hopeless lawsuits that get lots of publicity, but then get tossed out of court because he is a terrible lawyer. But he's GREAT at chasing publicity, as all the headlines and joyful wingnut media coverage of his latest effort indicate.

So, what is Klayman doing to help these grieving parents? Mostly getting a big splashy news story out there to keep stoking rightwing rage over Benghazi, because the claims themselves are crap. In a statement, Klayman explained the gist of his case:

Having used a secret private email server that we now know was used to communicate with Ambassador Christopher Stevens with confidential and classified government information, and which we now know was likely hacked by hostile adversaries such as Iran, Russia, China and North Korea aligning with terrorist groups, it is clear that Hillary Clinton allegedly negligently and recklessly gave up the classified location of the plaintiffs’ sons, resulting in a deadly terrorist attack that took their lives.

Not that Clinton actually used her private server to communicate with Stevens -- she said as much at the Benghazi hearings, where Republicans were angry that she didn't even have Stevens over for dinner. There's no evidence Clinton's email server was hacked by foreign powers -- as James Comey confirmed in his press conference announcing he wouldn't recommend charges against Clinton. He did say it was possible the server was hacked in such a way as to leave no trace, but no, we really don't know that it was hacked by that list of bad guys. And unless Klayman has some astonishing evidence that the nine million Benghazi investigations failed to turn up, there's no evidence at all the Benghazi attackers had been tipped off about Stevens's whereabouts. But baseless speculation is kind of like evidence, isn't it?

Napolitano points out the lawsuit isn't likely to go anywhere, since as a cabinet official, Clinton has immunity from liability lawsuits. More to the point, he readily agreed that the lawsuit is more about Klayman seeking publicity during an election year than actually rendering a judgment against Clinton or recovering damages for the parents, as he told Fox host Steve Doocy:

Napolitano: Quite frankly, I don't think either parts of this lawsuit are going to go -- they're certainly not going to go anywhere during the election campaign.

Doocy: Not before November.

Napolitano: Judges will not rule on something like this during the campaign and they don't like to rule on cases like this at all because they view them as essentially political. If you don't like Hillary, go on television and tell everybody why you don't like her. Don't bother the judicial system. That would be the attitude of most federal judges.

Doocy: OK, so if a judge would not address this until after the election, this is obviously just to inflict as much political damage onto Hillary Clinton as they possibly could.

Napolitano: The lawyer here, who a lot of us know, Larry Klayman is a real gadfly who has been driving Hillary and folks who agree with her crazy with lawsuits for many years. And this is just another one of them.

That's some noble pursuit of Justice, all right. When Fox News's minimally competent legal expert brands Klayman's efforts a transparent publicity ploy, your actual legal maneuvering might not have much chance of succeeding.

You might remember Klayman from some of his other noteworthy legal pursuits, such as his recent lawsuit against Barack Obama and all the black people in America for endangering his life as a white guy. Or his 2014 attempt to have Obama deported because of that fake birth certificate. Or his failed attempt to be allowed to represent the Bundy terrorist gang. Or that stunt in 2013 where Klayman and several dozen supporters showed up outside the White House to arrest Barack Obama and try him for Treason. Obama was infuriatingly uncooperative that time, too. Someday Larry Klayman is going to give a speech like Henry Fonda's farewell in The Grapes of Wrath, where he promises that wherever there's a really shitty excuse for a politically motivated lawsuit, he'll be there.

And what does Hillary Clinton have to say about being sued for her part in murdering the four brave Americans in Benghazi? Strangely, her campaign didn't lash out at Smith and Woods, or even attack Klayman for his election year sideshow. Instead, the campaign went for a diplomatic tone, like you might expect from a top diplomat:

Nick Merrill, a spokesman for Mrs. Clinton, said in a statement, “While no one can imagine the pain of the families of the brave Americans we lost at Benghazi, there have been nine different investigations into this attack and none found any evidence whatsoever of any wrongdoing on the part of Hillary Clinton.”

Huh. Rejects the premise of the lawsuit while remaining sympathetic to the pain of the parents. Can you imagine how diplomatically Donald Trump would have reacted to a meritless lawsuit accusing him of having killed people while performing his official duties?