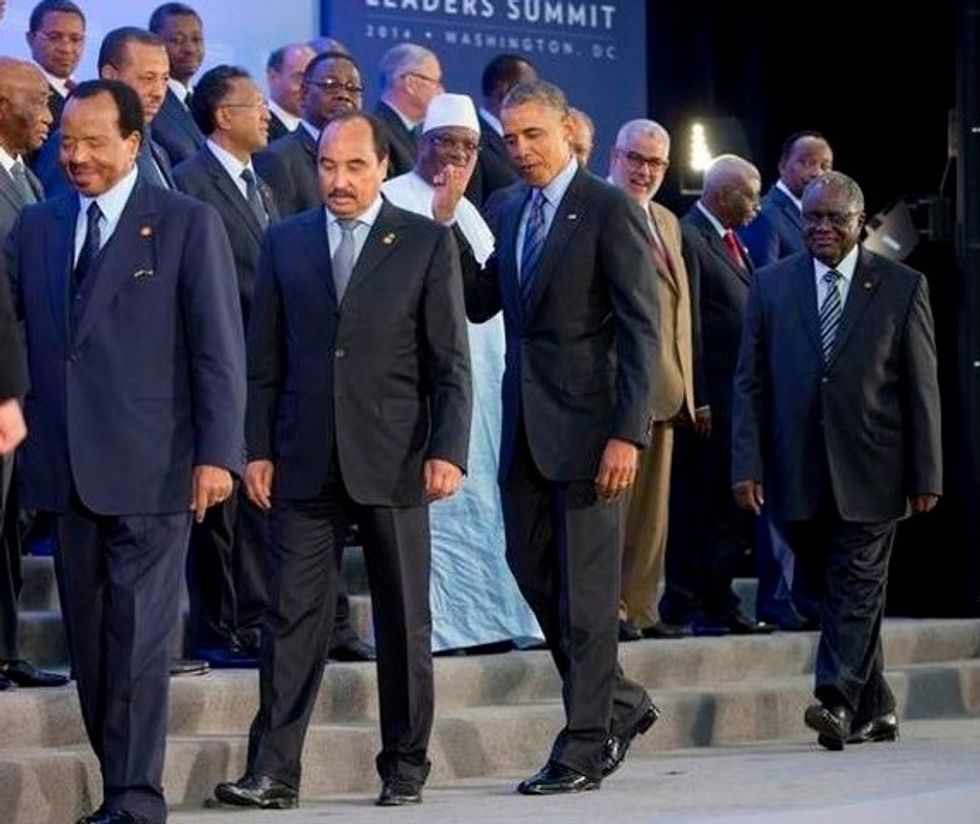 Barack Hussein Obama had better just give up the pretense and admit that he's a Muslim Manchurian Candidate, because some genius at "American Thinker" -- where the stuff that's too crazy for WorldNetDaily ends up -- has finally found the conclusive evidence of Barack Hussein Obama Soetoro Guevara Lumumba Hitler's definite membership in the Islamic Death Cult: He was photographed throwing Muslim Gang Signs! There it is, right in the picture up there!

Is President Obama a Muslim? A lot has been written about this, but if photographs speak louder than words, then a photo taken at last August’s U.S.-African Leaders’ Summit in Washington D.C. might shed considerable light.

Wow, that's pretty incisive analysis! As proof that this is all being covered up, Burleigh notes that the AP photo has only been published once, in the British tabloid The Daily Mail, which was apparently the only publication with the guts to expose the truth!!!!

Burleigh explains, based on a body of extensive knowledge of Islam that he pulled directly from some combination of the internet and his own ass, the significance of an index finger pointing upward, an unnatural and extremely rare gesture:

The one-finger display is the distinctive Muslim gang sign: The index finger points straight up while the thumb wraps underneath and presses against the digital phalange of the middle finger. The remaining fingers are squeezed against the palm in order to highlight the extended forefinger. The extended finger is symbolic of the one-God concept of Muhammad and is understood by all believers to be a symbolic shahada, the Muslim affirmation of faith: There is but one God and Muhammad is his messenger.

Thus when believers stick their index finger in the air, they demonstrate they are partisans of Muhammad’s God concept. And they also affirm their belief in Muhammad’s claim he was the interface between God and man. They also demonstrate they are part of the umma, the exclusive transtribal supertribe of believers that Muhammad started 1,400 years ago.

With his forefinger in the air, Obama affirmed his membership in this tribe.

Or maybe he was simply pointing or holding one finger up in the air, as the radical leftist Obama-worshipers at Media Matters claim in a desperate attempt to cover up Burleigh's shocking revelation:

There are two main flaws with Burleigh's argument. First, video of the event captured from two angles indicates that Obama was actually wagging his finger, not pointing it. (Burleigh criticized the editors of the paper that published the photo for captioning it "finger wagging," claiming that they "did not understand what they were looking at.)

But can we really be so sure? In both videos, Obama's finger is briefly blocked from view by his head, which we should note is of a dusky hue like the heads of many known Muslims. Is this innocent finger-wagging or shahada?

Obviously, a careful frame-by-frame analysis is needed to unravel this mystery -- the Zafinger film.

Second -- and it's difficult to believe we need to point this out -- many, many other world leaders have previously been photographed pointing their index fingers upward, suggesting either that Burleigh's argument is nonsense, or that several other recent U.S. and foreign leaders were secret Muslims.

And yet, even with the evidence right in front of their eyes, the deluded dhimmis of Media Matters fail to see the truth: The Muslim infiltration of Western democracy has gone back for generations, and is far more deeply embedded than anyone knew. They've already infiltrated every sports fan who chants "We're number one!" and then affirms their membership in the tribe of Islam. Their insidious influence extends even to children's television:

Before you know it, they'll even be sneaking Islam into ice cream. Children's ice cream.

Say, does Rudy Giuliani know about this?