Laugh Joyously Along With These Russian Ice Dancers Performing 'The Holocaust'! 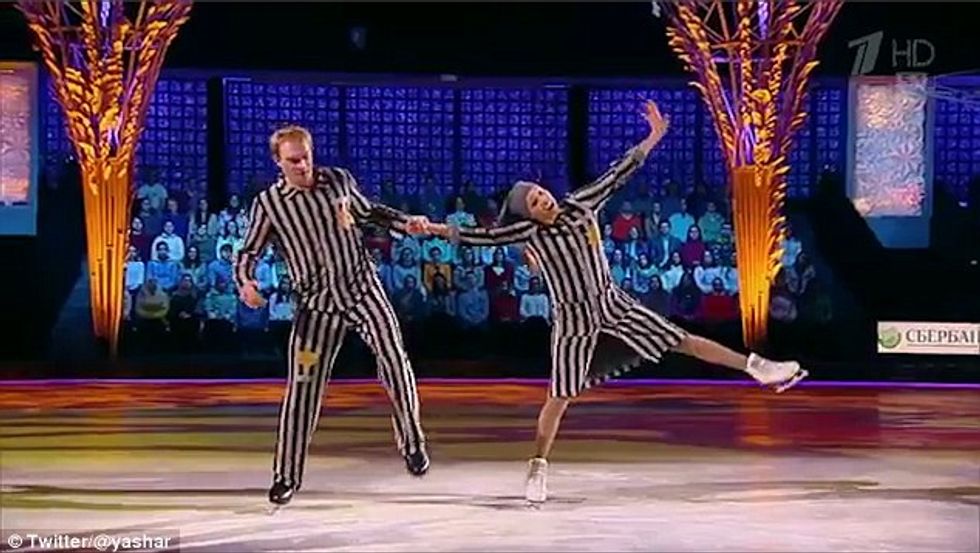 Couple of things about this HOT NEW VID of Putin's spokesman's wife doing her excellent "The Holocaust" ice dancing number:

3. Okay, so we actually have no problem theoretically with an ice dancing number about The Holocaust; art breathes tears and scars, which is a very deep and wise-sounding thing someone once said (us, just now). If we can watch Sophie's Choice and Schindler's List (but NOT MAKE OUT DURING THEM), we can watch Happy Jews Get Murdered On Ice.

4. And actually, it is good that the Russians, in the form of this one lady, are reminding other Russians about this, because there is a lot of Holocaust denial there despite Putin outlawing it a few years back, but these Stormfront guys say it is okay that he did that, it was just to crack down on fake CIA neo-Nazis. Um. So. (Don't click.)

5. Oh my god, they are wearing jail stripes and giant yellow stars.

6. OH MY GOD THEY ARE DOING MIME AND LAUGHING AND DOING THE JITTERBUG.

7. Presumably this is based on that Life Is Beautiful movie about the Holocaust clown that we did not watch, because "Holocaust clown."

9. Why is the man grinning on his way to the mime gas chamber? I don't know! It's all fucked up!

10. He is dead now, but don't worry, just hold your mime baby and be SAD FOREVER BECAUSE IT IS THE HOLOCAUST AND WHAT THE HELL WERE YOU ALL GRINNING AND LAUGHING ABOUT YOU FUCKING MORONS EVERYONE IS FUCKING DEAD.

In conclusion what the fuck did we just watch, the end.