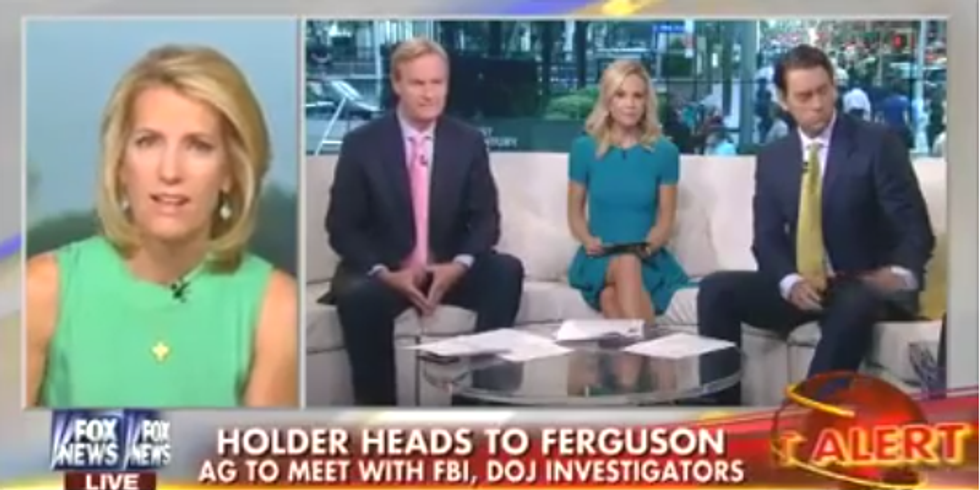 In times of civil unrest and racial tension and cops killing unarmed black teenagers, the number one expert you want to explain it to you is wingnut radio gum-flapper Laura Ingraham. That's just obvious, at least if you are a Fox & Friends bobblehead:

After another night of clashes between police and protesters in Ferguson on Tuesday, Fox News host Steve Doocy asked Ingraham why “somebody would throw a gas bomb at a cop.”

Ingraham asserted that Missouri Highway Patrol Captain Ron Johnson was making a mistake by trying to “engage with the community,” and “show them we care.”

“I understand that impulse, I really do,” she insisted. “But we know now that thugs are thugs. People who are going to take advantage of the situation are going to do that, especially if they know that the media is all there.”

It's really too bad Captain Ron Johnson didn't consult Ingraham before wasting his time trying to show the enraged citizens of Ferguson that he actually cares about them. AS WE NOW KNOW, the only way to stop a community of thugs (aka, African Americans, but hey, potayto potahto) who are going to thug so hard because that's what thugs do is to turn their previously peaceful town into a war zone with tanks and tear gas and rubber bullets and whatever else the military yard-saled after it was done making war sweet war on Iraq and Afghanistan. That's just obvious.

And it's also even more obvious that when a cop kills a teenager and then goes on paid vacay while his department stumbles around trying to come up with a reason, any reason, why it was not straight up MURDER -- he was high on the marijuana and also liked the rap music and stole some cigars even though the cop did not know he stole some cigars until after he bang-banged him to death, but whatever -- well, a community of thugs is inevitably going to take advantage of that situation to be thugs. THAT'S JUST OBVIOUS.

Also, too, tea partiers. Wait, what?

What do you think would have happened, guys, if tea party activists, right, came to Washington D.C. after the IRS scandal broke and decided to start smashing windows, rampaging through neighborhoods, throwing fire bombs. What do you think Eric Holder and Barack Obama would do? Would they start saying, 'Well, we understand that people are angry, we really get your emotion here, but this isn't acceptable. Do you really think there would have been this nuanced language, this emoting that has become the pastime of this administration?

Wow, what an excellent question and a totally not ridiculous comparison! Because tea partiers storming the capital in response to the phony IRS scandal would have been exactly the same thing as African Americans being just the tiniest bit irritated and fatigued from being killed by cops EVERY single day. It sure is hard to imagine how the government would respond to a bunch of pissed off white people getting all outraged at their government and even arming themselves to the teeth and threatening to kill any feds who dare to get in their way. If only we could think of an example. Hmmm ... nope, nothing comes to mind. Guess Laura Ingraham's probably right.