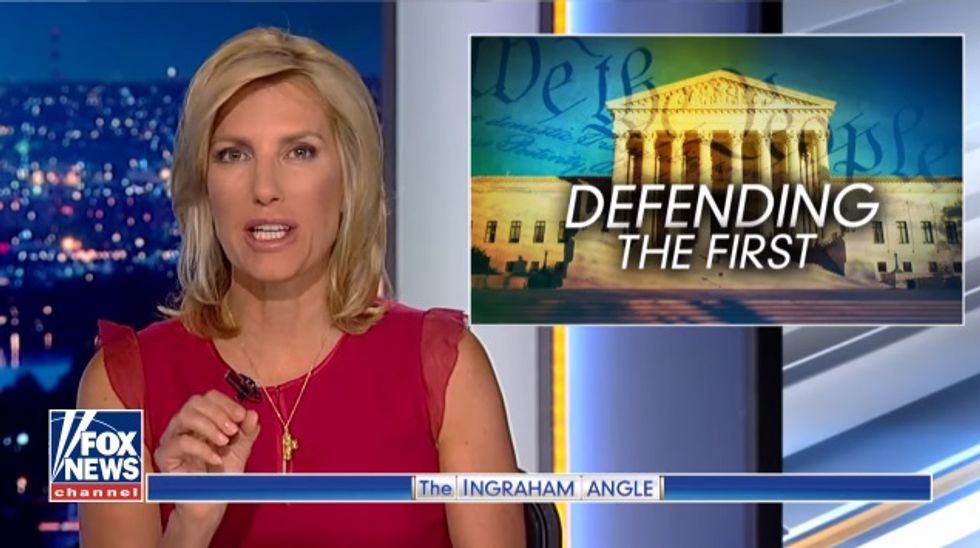 Laura Ingraham returned to Fox News last night after a week off, proving that there really is a big farm upstate where troubled Fox hosts go, and sometimes they come back after their frolics. Hope she said hi to Bill O'Reilly, who started a long bus trip last year around the same time. And now that she's back, she has a new mission in life: defeating the Left Wing Speech Czars who are out to silence conservative voices forever. You know, just like Evil Leftists have been trying to silence conservatives since the mid-'80s, when the Left's alleged enforcement of political correctness was, even then, threatening to extinguish free speech forever. Ingraham's Monday show was virtually all about the many sins of the Left in silencing conservatives (apart from a few minutes on the FBI raids on Michael Cohen's office, which maybe was another leftist plot; we fast-forwarded past that segment).

In her opening editorial blast, Ingraham, who has herself been silenced by an advertiser boycott, explained why all the mean leftists are trying to silence conservatives: Now that almost all Americans agree with Donald Trump, the Left no longer has any hope of convincing people through rational discourse (which is impossible, since liberalism is a mental illness -- we saw it on the internet and in a bookstore!), so to prop up their failing leftist ideology, conservatives must be silenced, you see:

Their efforts are Stalinist, pure and simple [...] Their objective is a total transformation of American society, not through rational discourse and open debate, but through personal demonization and silencing.

Gosh, the "total transformation" of America -- is that supposed to have some kind of dog-whistle meaning for Fox viewers, ya think? They spent eight years panicking about one line in an Obama speech about the "fundamental transformation" of American politics, which obviously meant destroying freedom, and even with Obama no longer onstage, they just know the dirty liberals are out to do that, whatever it was. Maybe declare a caliphate.

As proof of how conservatives have no free speech anymore, Ingraham cited the case of poor Kevin Williamson, who was fired from The Atlantic Monthly merely because he said, several times, that women who have abortions ought to be executed as murderers. Sure, Ingraham said, it was a crude and violent thing to say, but many Americans also think that abortion is very crude and violent, too, and doesn't Williamson's right to free speech outweigh The Atlantic's right to decide who works for them?

Ingraham closed her show with an exciting announcement about a brand new feature of her show: "Defending the First," in which she will do something that no one else out there is doing: defend the First Amendment, which is under attack by leftist Stalinist mobs. Suck it, ACLU! She's going to expose and call attention to those who would destroy America (leftists) just for making them a little uncomfortable:

We're seeing the left-wing retaliatory hit squads popping up everywhere. Today, in academia, in Hollywood, and in the media, the Left will brook no dissent. And they will militantly police the borders of their stale orthodoxy. Well, we're not going to stand for this.

And what will this all-new innovative recurring series do?

We will expose the enemies of the First Amendment, of free expression and free thought, while showcasing those brave voices making a difference. So if you've been subjected to threats or intimidation because of your speech, I want to know about it. Tweet me at @IngrahamAngle because without free speech and a free conscience, we're not truly a free people.

Perhaps Yr Wonkette should ask Ingraham to profile us for that time her current co-worker Dana Loesch -- then at Breitbart -- organized a remarkably successful advertiser boycott against Wonkette in response to a really dumb, unfunny, AND offensive joke about Trig Palin. We're still hearing about it, seven years later, even though the blog has changed ownership and no one from that time still works here. On the upside, we now have no ads at all, because our brilliant, discerning readers know we're the best source of artisanal political commentary spiked with dick jokes on the internet.

Should she choose not to profile First Amendment Martyr Wonkette, we found a terrific candidate for Ingraham to interview right away, because like her, this is a media figure who created a lot of controversy for speaking his mind about Marjory Stoneman Douglas student David Hogg. This time, though, the conservative victim of the leftist Mob, Jamie Allman, a TV talker on Sinclair Broadcasting's KNDL in Saint Louis, got canned for going well beyond Ingraham's mocking of Hogg about not getting into some of his first-choice colleges. (After losing his TV show, Allman was also replaced by a guest host on his radio talk show today, although his exact employment status is unclear.)

Ingraham's approach was clearly too mild for Mr. Allman, who had far more searing satirical intent, in a now-deleted tweet two weeks ago:

We've already tweeted our own suggestion to Ms. Ingraham that she profile Mr. Allman on "Defending The First," because after all, just like Kevin Williamson, Allman may have suggested something horrific, but he was certainly speaking for a sizeable portion of the conservative audience. Heck, unlike Williamson, Allman could even make the claim that he meant that metaphorically, so we certainly hope Ingraham will have Allman on her show to explain why an innocent, probably not literal, call for shoving a red-hot poker up a teenage boy's ass is a valuable contribution to America's ongoing dialogue about guns, and about the liberals who have silenced him. Unless she doesn't really believe in complete free speech, of course.

Please click here to help us continue our mission of advertising-free snark. We are financed completely by reader donations -- just like Stalin.