Learn This Hot New Trick To Raise Girls To Be Ladies, With Homemaking Classes 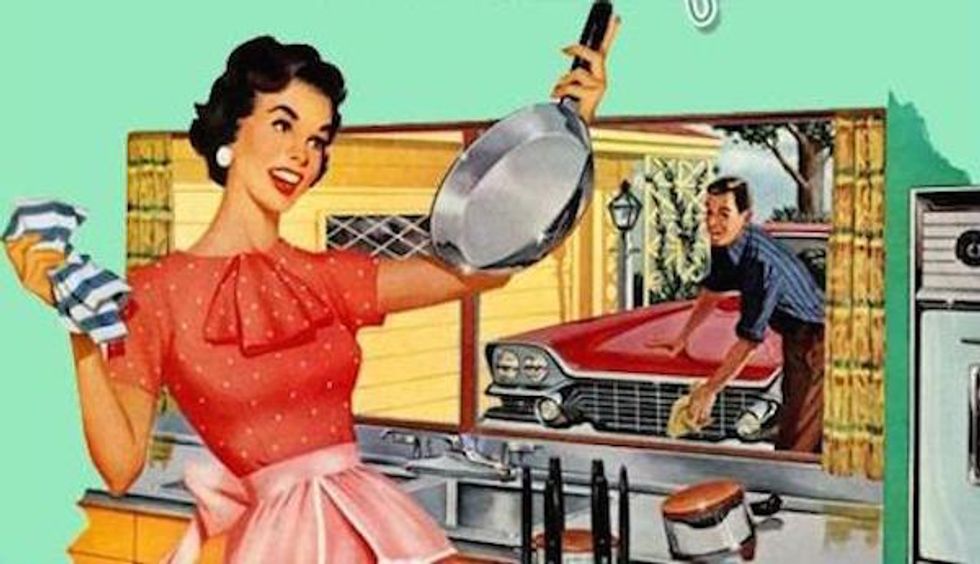 So it turns out Dr. James Dobson -- the conservative Bible-humper who founded pretty much all the greatest conservative Bible-humping groups, like Focus on the Family and the Family Research Council and Jesus Hates Your Gay Family and Your Family Is Going To Hell In A Hand-basket Unless You Buy This Book By Dr. James Dobson -- is still around doling out advice you don't want or need.

Sure, he's 137, but he doesn't sound a day over 237, and he has some helpful advice for you parents out there who are concerned that your daughters are probably going to grow up to be classless whores, UNLESS. Unless what? Unless you read his newsletter, of course, at his latest venture, Family Talk. (Buying his book, Bringing Up Girls, won't hurt, though, if you know what he means. And he means, you should definitely buy his book.)

This particular newsletter is a copy-paste job from the chapter "Teaching Girls to Be Ladies," so let's learn how to do that!

To properly learn how to Be Ladies, we must "step back a couple of hundred years" to the great authoritative voice on the subject of "manners" and ladies, John Adams. He said some cool stuff about how moms are really important because they teach kids to behave good:

How insightful it is that Adams placed the responsibility for the essential moral character of the nation squarely on the shoulders of mothers. Fathers play a key role too, of course, but moms are absolutely indispensable.

Fathers are key, but mothers are even more key -- and indispensable! -- which is why when Mrs. Adams politely asked her husband, while he was off founding the nation with his bros, to "remember the ladies," he was like, "Oh yeah, ladies are so important, I will definitely want to include them in our founding documents so they have rights and stuff, no problem, honey, way ahead of you." But then he forgot to do that, whoops.

Still, the whole fate of the nation depends on women, as John Adams so well understood and wrote about except for in that one document that one time, DAMNIT:

If women grow weary of that responsibility, or if they lose sight of their own moral compass, no other institution or governmental agency will be able to save the nation. So wrote President John Adams.

Let's fast forward to the modern era because we haven't learned anything yet, besides that John Adams was a hypocrite, which is probably why Dobson likes him so much, but we already knew that:

But what form does this early training take in today’s world? It begins with basic civility, because manners and morals are directly connected. As Horace Mann said, “Manners easily and rapidly mature into morals.”

Horace Mann! Why, that is modern. If we were born in the 1800s. Let's see if we can make it all the way to this century before we have to say "screw this" and start drinking.

Alas, American and British cultures in the twenty-first century have swung to the other end of the continuum.

Yay, we made it to the 21st century! Maybe now we will finally learn how to Be Ladies!

Young girls are often allowed, and even encouraged, to be brash, rude, crude, profane, immodest, immoral, loud, and aggressive. Some of this behavior has been consciously taught in recent years under the rubric of “assertiveness training.”

Oh, fuck, not crude AND profane AND LOUD!!!!

To the extent that such programs were designed to instill confidence in bashful, frightened young women, I supported them. But some girls have been taught the worst characteristics of “uncivil” males. I know my words must sound horribly old-fashioned and archaic at this point, but there is something important here for us to consider.

The something, it turns out, is that parents these days are "too distracted, overworked, and stressed" to teach their kids how to not be terrible uncouth amoral monsters, and as a result, "society has reached an all-time low when it comes to matters of civility."

That sounds awful. Is there some particular group we can blame for the unraveling of civilization?

Once again, speaking directly to mothers, it is your job to acculturate your daughters and to help them become ladies. Does that sound chauvinistic in our high-tech world? I suppose it does, but even so, it makes sense.

Therefore, girls should be taught how to eat, talk, walk, dress, converse on the telephone, and respond to adults with respect and poise.

Boys are born knowing how to walk and converse on the telephone, apparently. Or maybe they don't need to know how to do that, because theirs are not the heavily burdened shoulders on which the fate of our nation rests. They're just the ones who get to vote and own stuff and make all the decisions, or at least that's how it used to be in the good ol' John Adams days.

There are some generic gender-neutral admonitions to "parents" about "kids," like how they should be taught the "techniques of personal grooming, hygiene, and nutrition." So eating proper-like is for girls, but teeth-brushing is for everyone!

Admittedly, Dr. Dobson doesn't really know what he's talking about. No, seriously, he admits that:

Although I am not an expert in teaching girls some of the social graces I have named (I learned a masculine version of the rules), I know them when I see them.

Is there some way we could require girls to learn these important girl skills? Well, there used to be:

These diverse skills used to be taught to girls in mandatory homemaking classes. Alas, most of these programs were canceled after the revolution of the sixties, and America became the worse for it. Road rage, loud cell phone conversations in restaurants, cutting in line, throwing litter from car windows, and general nastiness are now everyday occurrences.

If only we still required girls to learn how to make tuna fish casserole, we would not have road rage. But alas, the sixties happened half a century ago, and then came cell phones, and it all went downhill pretty fast from there. Poor John Adams. Weep for Horace Mann.

Even if you are a grown woman and you want to teach your daughter how to Be Ladies, but you don't know how because no one taught you, Dr. Dobson says that's OK because there are really expensive etiquette classes you can take to learn how to not litter and set a dining room table, and it is SO worth the price.

And then there is a really long story about how Dr. Dobson met his wife, and also, girls should make boys take them out to nice restaurants on dates and make boys pay, or else civilization will become even more uncivilized somehow, and also, DON'T HAVE SEX, because "that wrecks a relationship. Besides, it is morally wrong."

No road rage, no cussing, no fucking. This whole Be Ladies thing sounds like absolutely no fun at all. Anything else to add, Dr. Dobson?

However, teaching girls to be ladies is not enough. We must also give them a strong biblical foundation from which morals and virtues can evolve. Our hope is that our daughters will someday pass along those verities to the next generation. No other priority comes close to this one in significance.

Aw, Christ, we gotta learn biblical stuff too? Can't we just learn which fork to use for shrimp and call it a day?

Don’t forget to help Family Talk stay afloat financially if you can. It is amazing how the bills just keep rolling in.

Oh right. Send money, so Dr. Dobson can keep explaining how mothers have ruined America by raising their daughters all wrong and not according to the principles of Lady Expert John Adams.

Screw this Be Ladies nonsense. Let's have a fucking drink.