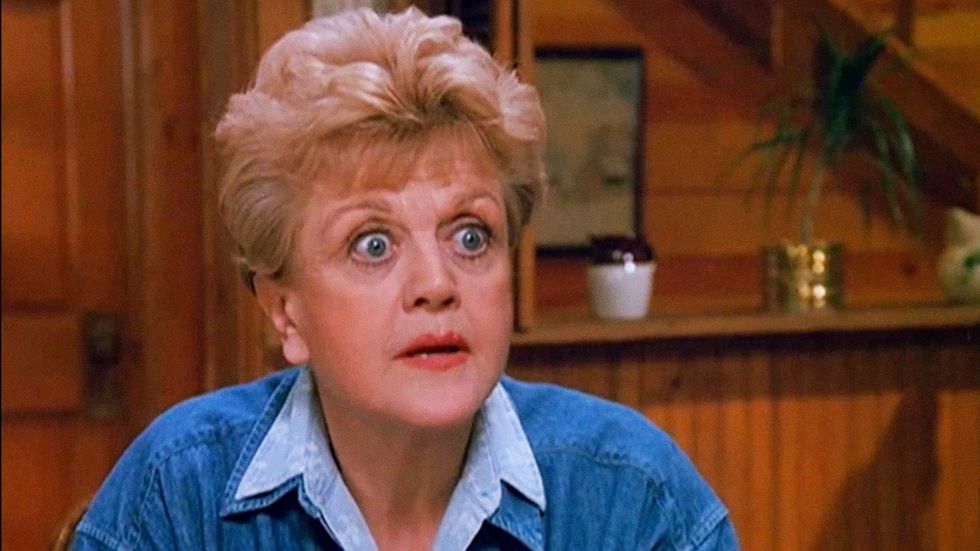 I am, notably, a very big fan of Dame Angela Lansbury. I even dressed up as Serial Killer Jessica Fletcher for Halloween last year. I spent hours as a child trying to force my sister to learn Bea Arthur's part in "Bosom Buddies." So when I heard about her recent comments regarding sexual harassment and sexual assault, it was like a dagger to my very heart.

“There are two sides to this coin,” she said. “We have to own up to the fact that women, since time immemorial, have gone out of their way to make themselves attractive. And unfortunately it has backfired on us – and this is where we are today.

“We must sometimes take blame, women. I really do think that. Although it’s awful to say we can’t make ourselves look as attractive as possible without being knocked down and raped.”

Those comments? Those comments were not good. The ones after were much better, but -- alas -- those haven't been popping up as much in many of the articles covering this.

"Should women be prepared for this? No, they shouldn’t have to be! There’s no excuse for that. And I think it will stop now – it will have to. I think a lot of men must be very worried at this point.”

AS WELL THEY SHOULD BE.

I've given a lot of thought to Lansbury's first set of comments, though. My initial reaction was "NOT YOU TOO, JESSICA FLETCHER! NOOOOOOOOOOOOO!!!!!" as would be expected. I was mad because she was, I thought, supposed to be better. She was supposed to be a bad ass bitch. How could she betray us like this? Can I even watch Murder, She Wrote anymore?

I've come to the conclusion, however, that I'm not angry at Angela Lansbury. I'm not mad at her. I'm mad for her.

We talk a lot about the ways women have been socialized to believe that sexual harassment and sexual assault are their fault -- that they are to blame for having worn clothes that are too sexy, for being too friendly or nice, for having "led them on" in some way without realizing it. We talk a lot about rape culture, and the ways in which male predatory behavior has been normalized and treated as an inevitable fact of life. Especially in Hollywood and by Hollywood.

Given all of that, of course a lot of women have fully internalized these messages -- and it feels deeply unfair to me to then turn around and blame them for having done so. It seems like we're getting mad at the wrong person, at the wrong thing. Angela Lansbury is not the patriarchy, she's been just as fucked up by it as the rest of us.

There is a difference between a man saying women are to blame for sexual harassment or sexual assault and a woman saying the same thing. There just is. Both are messed up, but there is a vast and important difference between perpetuating a fucked up system of belief that benefits you and renders you blameless in your actions, and suffering from Stockholm syndrome.

We don't know what Angela Lansbury has been through in her 92 years on this planet, and it's not my place to speculate on that. What I will say is that I've met a hell of lot of women who have said similar things, and who have later turned out to have had some serious trauma they were trying to cope with themselves. I've seen it so often that my first instinct now is to say Holy shit, what the hell happened to you? You never know what someone is carrying along with them, and what messed up ways they are coping with it. Maybe it's more helpful to help them unlearn this bullshit than it is to personally blame them for having been indoctrinated by it in the first place.

It's not only 92-year-old women who have this mindset; it's women my own age, it's women younger than I am. We all have so, so much unlearning to do when it comes to consent and sexual assault and harassment, and it's not going to be easy. We've still got a lot of work ahead of us before we all get where we need to be, and if we're ever going to get there, we mustlead more with patience and empathy than we do with outrage.

Wonkette is ad-free and supported solely by READERS LIKE YOU. Feed the kitty!