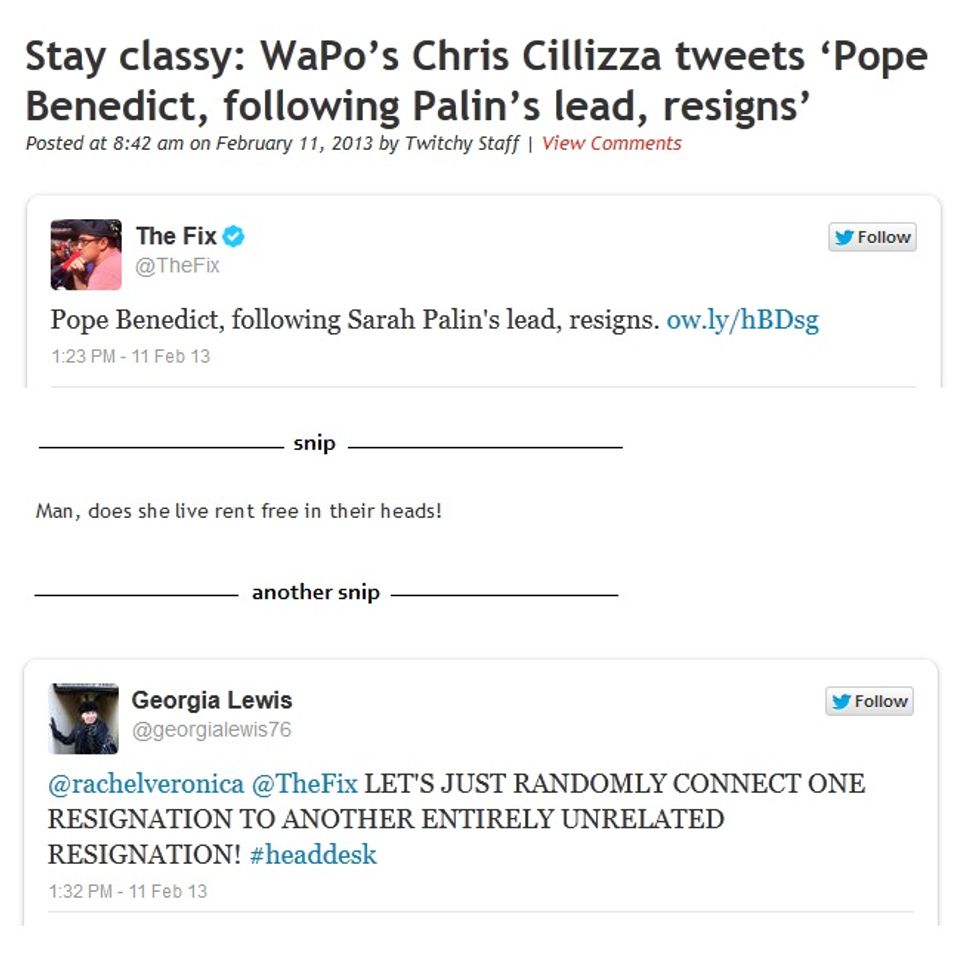 So, as you know, the Pope went all Brave Sir Robin today, but apparently it is very, very uncivil to make jokes about The Impressive Clergyman, or to mention that the institution he has led since 2005 has had a bit of a problem with kiddy-diddling priests. Almost as soon as the news was announced, there was a second wave of blog posts decrying the mean, terrible, awful things that "leftists" were saying about the Pope, because leftists and secularists are monsters. Our working theory is that, since it's been 600 years since a Pope departed St. Peter's any other way than feet-first, then saying unkind things about a man in a dress quitting his job is exactly as offensive as mocking the dead. So, please, people, a little respect -- Ratzi isn't even in the ground yet! (And it will be awfully hard for them to dig the grave if too many of us have already pissed on the spot.)

As we've already noted, the trend-setters of civility at Breitbart.com were the first to point out that it simply Will Not Do to mention that Holy Mother Church has had a minor problem with child rape and the covering-up of same, or that the departing Pope was in any way involved in the aftermath. Let's keep the REAL victims in mind here: all those poor bashed Catholics who are wounded by unkind reminders that the Church covered up the molestation of thousands of children.

We also see that, according to the very tasteful folks at Twitchy, it is very, very un-classy to make silly jokes about some other person who quit before their term of office was over, because there is no logical link between the two:

Because nothing betrays a pathological obsession with a minor political figure like making a little joke about her in a tweet.

Jim Hoft, the Stupidest Man on the Internet, also weighed in, saying that once the news broke, "Of course, it took about 5 minutes for the left to react with their typical hate." As evidence of "the left's" unified hatred of the Pope, Hoft presented images of four tweets saying mean things like “Don’t worry, in a few months you’ll be laughing about this. With Hitler in Hell” and “you lazy bastard. Get back to doing whatever the fuck it is you do.”

We thought that first one, from Frankie Boyle, who is apparently an actual professional comedian from Scotland, was kind of predictable; the three others on the page are similar garden-variety trolling. On the other hand, we actually liked this, from a comment on Hoft's post: "Not to politicize the issue, but will the next Pope be a Republican or Democrat?"

Frankly, we would like to say that all these allegedly outrageous comments about the recently resigned Pope are pretty amateurish. You want some outrage? Try this Tim Minchin song on for size (audio definitely NSFW, visuals only NSFW if teensy cartoon willies are banned in your workplace):