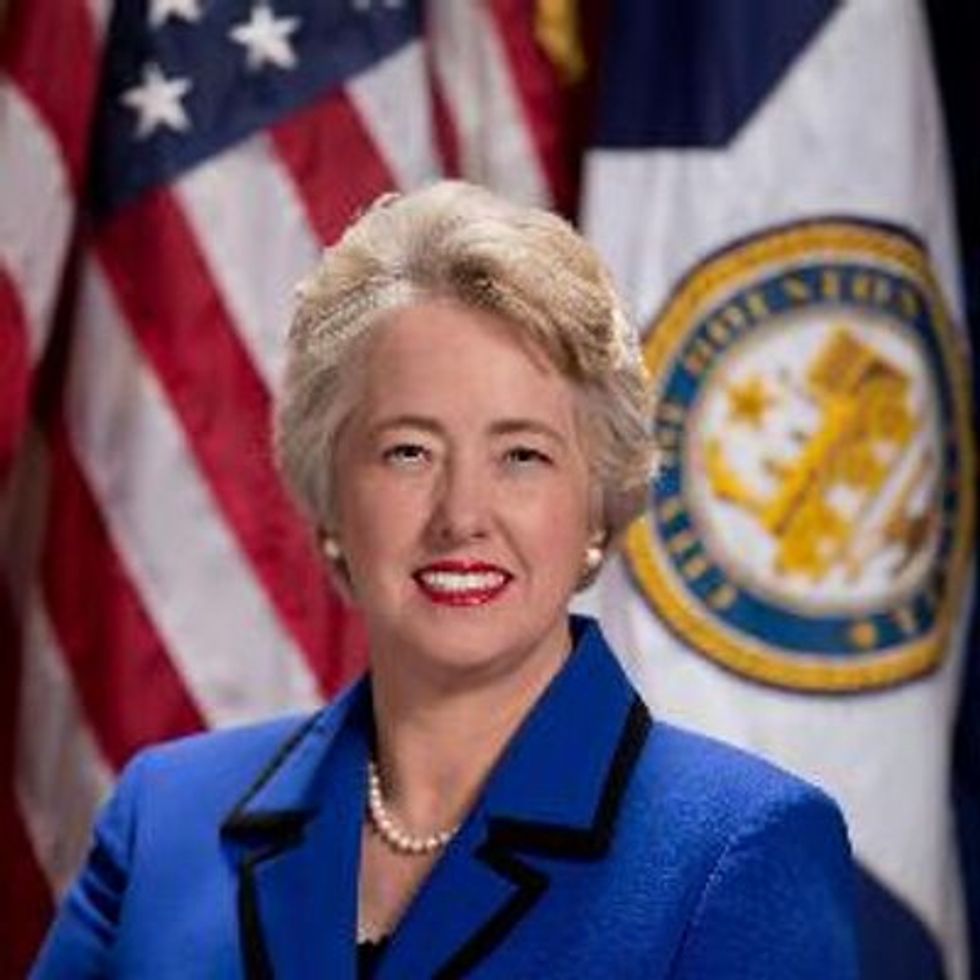 Tuesday night, Houston took one giant leap backward for humankind, as the Jenny Jerkoffs who showed up to vote decided to listen to lying religious right mofos instead of their own good sense, and effectively killed the Houston Equal Rights Ordinance (HERO), which would have enshrined anti-discrimination protections into law for ALL Houstonians, including the gays and the BLTs. Oh, but those voters were just worried about men with dicks putting on dresses and diddling Houston's daughters in the little divas' rooms, because that's a thing that happens. Right.

But two-term Houston Mayor Annise Parker, who's retiring at the end of this year to go put her feet up and drink Mai Tais at the Melissa Etheridge Dude Ranch, is NOT FINISHED YET. She's mayor for a bit longer, you see, and she stated clearly in a press conference that oh yeah, you fucksqueakers, she's working to bring the ordinance back, transgender stuff and all:

“Several council members have talked to me about bringing it back up, perhaps bringing it back up in segments, such as the nondiscrimination in employment and housing and public accommodations separately, so that we could directly deal with those aspects of the ordinance,” Parker said at her weekly press conference. “There may be other ideas.

Ooh, lesbian city council witchcraft! Instead of just doing the whole thing in one big Home Depot run, they could tinker around in the garage, fixin' parts separately until ALL HOUSTON is completely gay-gendered once again. Take THAT, suckers!

Parker says she's trying to "clear as many things off [her] desk" as she can, and that includes the giant smoldering pig turd Houston voters just left in the middle of it.

And also, too, she clarified why she will not be accepting any half measures that leave trans people out in the cold, because ALL PEOPLE NEED PROTECTION, GODDAMMIT:

“What is more fundamental than trying to provide access to a public restroom that is appropriate to the gender of an individual, when all they want to do is use the facilities and go on about their business?” she added. “All of this about pedophiles going into women’s restrooms was an out and out and falsehood, they knew it was a falsehood, and they sold a bill of goods. That’s all I can say. Masterfully played.”

Yeah really. We repeat what we said the other day to the activists: You're gonna have to jigger up a new way to sell this, something a little sexxxier that can overpower some Duck Dynasty guy screaming: "BEARDED MAN-PENIS IN CHRISTIAN LOUBOUTIN PUMPS PEEPIN' AT YR 'GINA WHILE YR PUTTIN' ON YR MAYBELLINE!"

Because (fingers and homosexbian penises crossed) once the nondiscrimination ordinance is back, be certain the same jackholes will be back too, with the same dumb fucking arguments. Oh, and this time they'll be jizz-sharting themselves over how bigots' rights to vote on others' civil rights are being disenfranchised. Fuck them, in their crusty earholes.

Of course, it also helps to get the business community SO MAD BRO, like what happened in Indiana when that state tried to fuck the gays, and oh look, Mayor Parker thinked of that too!

The New Civil Rights Movement points out that the NCAA and the NFL haven't decided to pull their huge upcoming events out of Houston just yet (2016 Final Four and 2017 Super Bowl respectively), but Human Rights Campaign President Chad Griffin is currently zipping, in his subterranean penis-shaped gay-mobile, to a meeting with NFL Commissioner Roger Goodell, and he's not going to drop off the secret Griffin family lasagna recipe, if you get our drift. (Our drift is that the meeting is about the ordinance, and not about lasagna.)

SO HAVE FUN WITH THAT, Houston. Nice bidness community you've got there! Would hate for it to turn against you in any way.