Let's All Listen To Track And Bristol Palin, And Laugh And Laugh 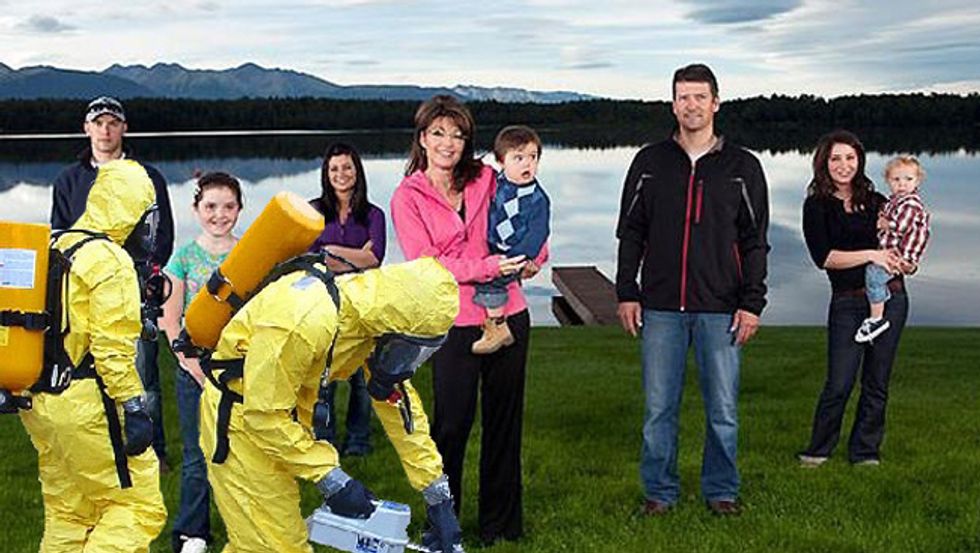 Update: Additional fun audio at end of post. Thank god for responsive government! We've already seen the police reports, and now Anchorage Police have released audio from their interviews with witnesses at the scene of the Great Wasillabilly Rumble. The recordings are a veritable treasure trove of alcohol-fueled rage, privilege, and score settling. There's the Big Drama over Track's maybe-lost St. George necklace, a talisman through which God Almighty bestowed His protection upon the War Hero:

"Did you find your necklace?" Sarah Palin said. "Track, that is such a God thing. See?"

"Track, that went to Iraq and Afghanistan," Palin continued. "Let me see it. I can't believe you found it. Let me put it in my pocket."

As yelling and chatter continued all around, Palin kept focused on one thing.

We hope you are as relieved as we are!

Then there's Korey Kuckin' Klingenmeyer introducing himself to the po-po, and demanding justice:

Klingenmeyer: Are you gonna take control of this situation on my property? These Palins runnin' up here in my property, actin' like they own it... is not right. I'm the fuckin' guy that owns this place, Korey Fuckin' Klingenmeyer. I don't give a fuck if their name's Palin, or fuckin' Obama, 'cause they don't mean shit to me... And I think I might wanna press charges on Bristol Palin, so bring one of your officers the fuck up here [...]

Klingenmeyer: Are you the sergeant here?

Klingenmeyer: I wanna talk to the head nigger in charge... I don't need this from... I'm here to have a good time, and this fuckin' drama Palin show shows up, and now we got a shitshow. So now, we're gonna fuckin take the legal fuckin side, because I know what's coming tomorrow morning, and you and I both know what I'm talkin' about. So let's get the paperwork fuckin' rollin right now, I wanna press charges against Bristol Fuckin' Palin...

The real star of these recordings, though, is the inebriated Track Palin. Thrill as Track Palin explains exactly what went down, while Sarah screeches "Bristol, hush! Let Track taaalk to the officer!" Paterfamilias Todd Palin stood by Track's side during his recitation (seriously, if you skip everything else, listen to the Track track):

"Alright this is my old man," Track said. "It's his birthday, okay. So we're at this party in Wasilla. Dude, surprise him with a new truck, new trailer, new wrap on the trailer. Everything was fucking kosher."

As he described what happened, Todd Palin interjected periodically. Both Track and Todd agreed that the fighting started when "a father-son team" punched their friend, "Steve."

"He's like a little pussy you know what I'm saying?" Track said, referring to Steve. "Like he's not gonna fight nobody. … Most innocent, basically a gay guy, but he's not."

Track's vocal work here is simply riveting as he does the voice of the guy who challenged him to fight, but then ran into the woods once Track got his shirt off. This man has a bright career in voiceover! Also, he and his not-gay gay guy friend Steve got coldcocked by some dudes, and what the hell was that? Track is so willing to fight, because he is tough, and while Todd explains that the unidentified assailants had pushed the Palin girls around, Track is more of a man of action: "Like really? You fuckin' pussies, let's fuckin fight."

At this point, the cop asks Track to identify himself, and he either tries to make a joke or can't remember the Army's phonetic alphabet:

But when it came to spelling his last name, Track became a little more dodgy.

That's when his father interrupted.

Except you know that if he'd been paying attention to those cop shows, he'd have known that most police departments use a whole 'nother phonetic alphabet from the military anyway, the stupid Sierra Oscar Bravo. "One Adam-Twelve, One Adam-Twelve" and all that (yes we are old).

Track was similarly helpful in describing the assailants. Which is to say, he couldn't say what they looked like, but he left no doubt that he would kick their asses, you bet:

"You gotta help me out, man," the officer said. "White, black, Native?"

"They're all white," Track responded before describing their body types. "If it was one-on-one, like I would beat the shit outta them. You know what I'm saying? Sorry."

"No, I understand," the cop reassured him.

Meanwhile, Bristol, poor Bristol, had to submit to the indignity of getting her photo taken by the police, even though she was not camera-ready!

"I don't want my face in a picture right now," she said. "There's nothing on my face except for beer and makeup."

And to think, this family could have been in the White House. Can't you just see Bristol drunk at some state dinner, losing her shoes, yelling "whatcha lookin' at, you fucking bitch?" to some first lady of the Czech Republic?

No, really, thanks! (shudder)

Update: Also, too, from the YouTubes, some lovely additional audio, with Sarah screaming "Bristol!" and much confused, angry discussion of what a monster Klingenmeyer was -- who pushes girls? Why would you let him go? Are you just letting him go? What kind of incompetent cops are you anyway??? Wow so BEEEEEEEP, much crying, wow, and they took Bristol's $300 sunglasses!

And a little bit more, for your listening pleasure.