Let's All Watch Retiring Sen. Carl Levin Yelling At Bankers Before It Was Cool 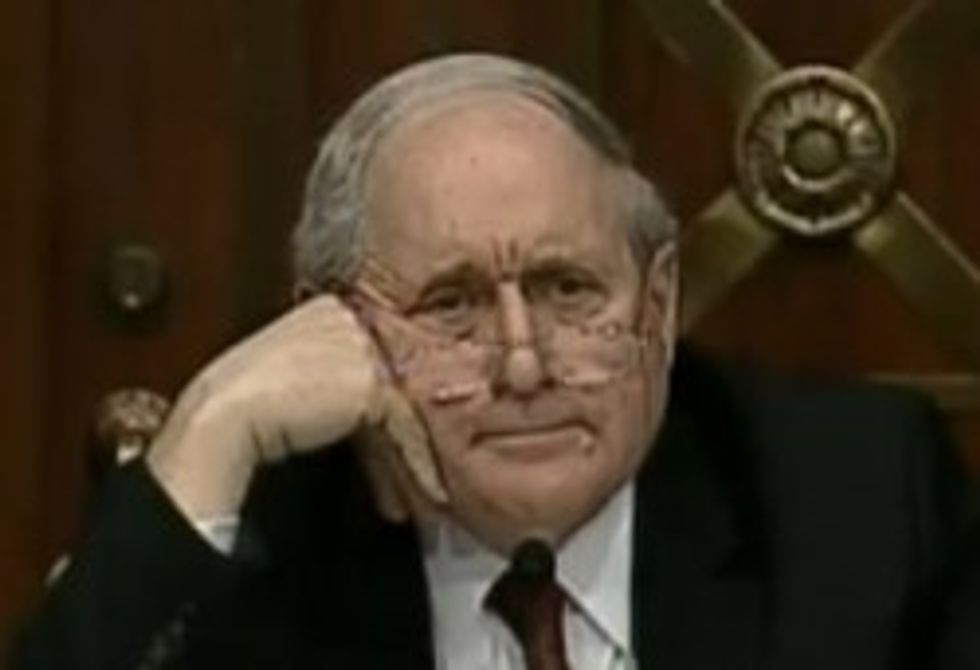 Six-term U.S. Sen. Carl Levin (D-MI) announced todayhe'll retire when his term ends in 2014. The professorial/grandfatherly senator was known for rumpled suits, huge combover, glasses tenuously perched on the edge of his nose, and dragging the banking industry's worst dreck before a committee hearing to tear them new assholes. While other senators (LIZ WARREN LIBEL) were busy not doing anything because what's the point if you can't get 59 friends to do it with you, Levin used his position as Chairman of the Permanent Subcommittee on Investigations to bring the thunder down on Wall Street. America will be a lesser place without Levin's unmitigated contempt for the shaved and fumigated conmen who nearly destroyed the American economy. So let us take this moment to remember some of Sen. Levin's finest moments yelling at banksters.

Here is perhaps the most famous Levin/banker moment, when he calls out Goldman Sachs Mortgage Division boss Daniel Sparks for peddling a "shitty deal" known as Timberwolf. Sparks keeps being like "context...context...context," but Levin would have none of it. "Your top priority was to sell that shitty deal!" Levin shouts at that garbage human being.

This is Levin grilling Goldman Sachs CEO Lloyd Blankfein. Unable to grasp the sheer awesomeness of Levin's contempt, Blankfein spends this entire clip looking like he has terrible, terrible gas. "They are not told that not only are you not a fiduciary, that you are betting against the very security that you're selling to them. You don't disclose that. That's worse that then not being a fiduciary! That's being in a conflict of interest situation," Levin sternly explained to Daniel Sparks boss.

Let's take a break from all those Senate hearings to listen to Levin explain what Egg Romney's Swiss bank account isn't anything like that draft account your common poors have at the local credit union. "The spokesperson for the Romney campaign said it was just an ordinary bank account in Switzerland that Mrs. Romney had? There's no such thing as an ordinary Swiss bank account," the senator said.

And, saving the best for last, enjoy Sen. Levin grilling some Merrill Lynch shmuck about a crooked Nigerian power barge deal they did with Enron. Blah blah blah says the Merrill guy but Levin was like BOOM! Here's the email contradicting all that bullshit. Then he drops the email like he's Kanye cold dropping the mic. He was so done with that guy. Because Carl Levin grilling bankers was like a million times cooler than Kanye West wrapped in bacon.