Let's Explore The Ways Donald J. Trump Is A Great Friend To The LGBT Community! 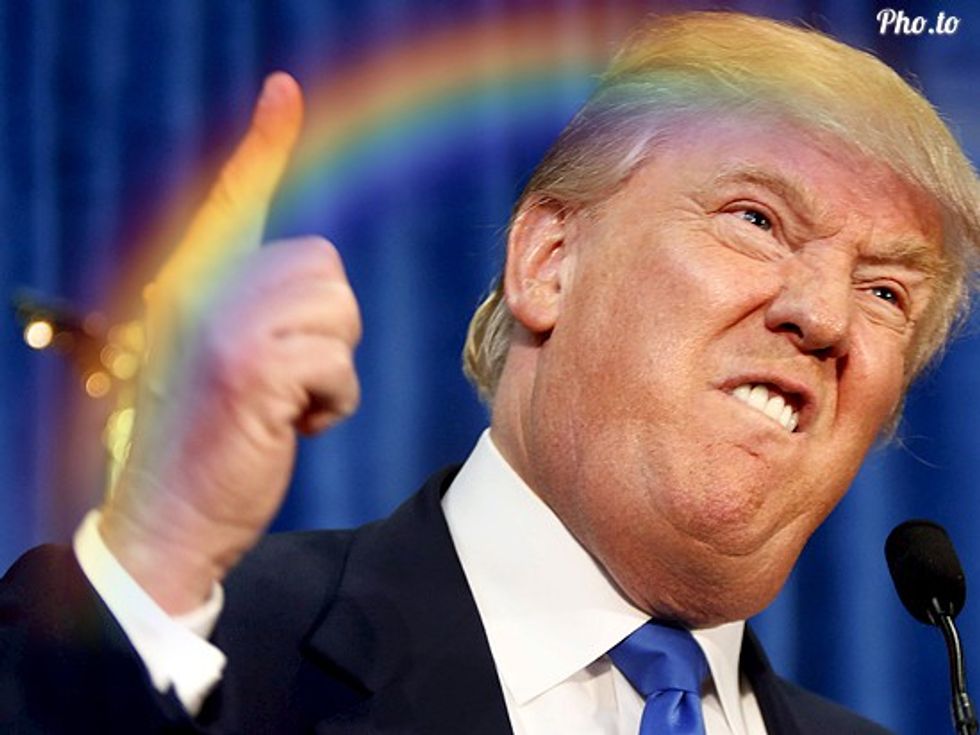 Yesterday, in a teleprompter-ed speech that he still managed to screw up, Donald Trump asserted himself as a better friend to the LGBT community than Hillary Clinton, due to his plan to end all terrorism forever by repeating the phrase "Radical Islamic Terrorism" over and over again and banning Muslims and Syrian refugees, who may not even be Muslims, from entering the country.

[wonkbar]<a href="http://wonkette.com/598495/donald-trump-thinks-gays-are-just-terrific-unless-he-doesnt-who-even-knows"></a>[/wonkbar]This, of course, is somewhat curious given that Trump has promised to overrule the Supreme Court's decision on marriage equality and allow the states to decide whether or not to allow gay people to have that right. Also given the fact that he has vowed to put another Scalia on the Supreme Court! However, he believes LGBT people will overlook all that because he will be banning Muslims from entering the country.

Of course, this particular incident aside, Muslims are far from the biggest problem LGBT citizens have in this country. Rather, those leading the call to kill, jail or discriminate against gay people have been conservative, fundamentalist Christians and the Republican party. And some of those people have been the very people that Donald J. Trump has chosen to surround himself with, as representatives of the Christian faith!

While Frank Amedia, Trump's official "Liaison For Christian Policy," is perhaps best known for the time he stopped a tsunami with his mind, he's also got some issues with the gays. Namely that he believes that AIDS is the result of "unnatural sex."

Then there is Robert Jeffress, one of Trump's surrogates and a Fox News contributor, who has had some highly interesting things to say about LGBT people! Like the time he said trans bathroom rights were a bigger threat to our country than ISIS. Or the time he gave a sermon titled "Why Gay Is Not O.K." Or the time he thought that marriage equality was a sign of the "end times."

Trump also worked very hard to secure the endorsement of Jerry Fallwell, Jr., of whom he said “It is truly an honor to receive Jerry’s endorsement. Not only is he a high-quality person, with a wonderful family, whom I have great respect for – I also consider him a very good friend and his support means so much to me.”

He invited preacher Carl Gallups to deliver an invocation at one of his rallies, and bragged of getting his endorsement. Gallup has previously stated that gay people are attempting to enslave Christians, and that schools need to teach children about how allowing people to be gay has led to the demise of other countries.

OH! And the list does not end there my friends! On June 21st, Trump plans to meet with some of the most notorious anti-LGBT leaders in the country to discuss what a Trump presidency can do for them. People like Pat Robertson, James Dodson, Tony Perkins, Cindy Jacobs, Rick Scarborough and more, who have made careers out of saying completely fucking horrifying things about LGBT people -- including blaming them for natural disasters, saying they are all pedophiles, and suggesting God will be so mad at us if we let them have rights that he will allow horrible things to happen to our country.

Let me be very clear here -- there's  not much difference between what any of these people have said about gay people and what "radical Islamic terrorists" have said about gay people. Oh sure, you might say, don't they execute gays in some theocratic Muslim countries, and hasn't ISIS been said to throw people off buildings? Noted! That's what happens when extremist religion is allowed to govern, as opposed to, say, the open, secular, democratic society we have in the United States. Put simply, they really can't get away with it here, at least not very often.

And I will tell you right now, that if someone were to listen to any of these people and really, really believe them? If they were to take them at their word? If they legitimately believed Pat Robertson when he said that deadly earthquakes were caused by God's anger at gay people, or that gay people were using special rings to cut people and spread AIDS? Then it would hardly be surprising to see them go on a shooting spree.

And guess what? They have.

So apparently Donald Trump is only a friend to the LGBT community when he believes doing so happens to coincide with his anti-Muslim rhetoric! Good to know!

Also, for what it's worth? Donald Trump's rhetoric has been known to incite violence as well. Hell, just this weekend he accused the President of the United States of being a secret Muslim terrorist. What if someone believed him and attempted to assassinate President Obama, truly believing that it was the only way to prevent another terrorist attack? What is it that any "Radical Islamic Terrorist" could have said to "radicalize" Orlando shooter Omar Mateen that would be at all distinguishable from things Donald Trump or the people he surrounds himself with have said? Quite frankly, I can't think of anything.