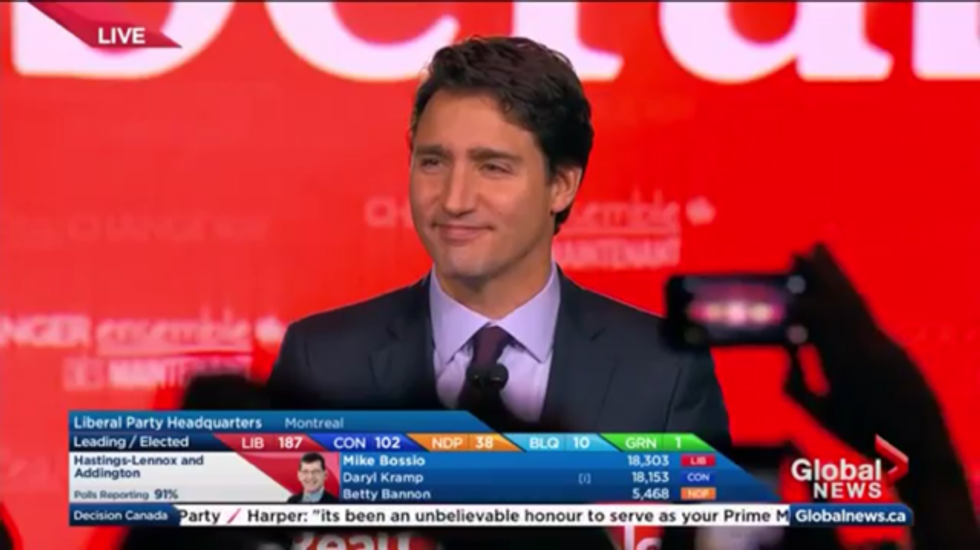 Oh, did everyone hear that Canada, which is apparently somewhere near Detroit, had a big election Monday? Canadian voters went to the polls and decided either to vote for liberal hopey changey good times, or maybe they just picked "The Hot One," because Justin Trudeau, son of former Canadian Prime Minister Pierre Trudeau, is BALLS OUT HOT.

Meet your new prime minister, U.S. America! (What? We don't have any sexy hot men running on EITHER side, we are entitled to take Canada's prime minister because #America.) We have introduced you to him once before!

We'll be in our bunk.

In his acceptance speech, he thanked his wife, Sophie, for being a really good wife, en Francais, and then said something to his kids, Xavier and Ella Grace, about how "Daddy will be here for you," even though he's the big prime minister now. Of course, we admit that we were only half paying attention, so we thought he was talking to us for a minute, and we were like OK!

Also, he told all the gathered Canadians, "I didn't make history, YOU DID." Which is true! Trudeau is sexy in HISTORIC proportions, and Canadians, YOU DID THAT, EH?

Here are some questions you might have, about the Canada place and the hot man:

We're too lazy to watch that video up there, can you just post a screengrab from the speech so we know what to fap to?

Is he as hot as Mexican President Enrique Peña Nieto?

We think yes, and also hotter, for actual. Don't worry, we still have a crush on you too, south of the border president! Decide for yourself.

Why not post a picture of Enrique Peña Nieto, for fair and balanced purposes?

Um, because this is Justin's Wonkette post. BACK OFF, ENRIQUE.

So this is good, though, right? The outgoing prime minister Stephen Harper is kind of a conservative dick, right?

That's what the internet says!

And here he is being silly with his kids, awwwwww:

OK, but only because we are a thorough journalist:

Did he ever get nekkid for a celebrity boxing match of any sort?

There is Canadian political shit-talking in that video, so if that interrupts your fapping, may we suggest the mute button?

Can you link us to like ONE ARTICLE that features actual information about what this means for our Canadian brethren and sistren, in a political-like way?

FINE, DORKS. Have fun learning "knowledge" or whatever.

Congratulations on your new liberal sexxx leadership, Canadia! We wish many wardrobe malfunctions upon him, and also a successful Liberal Party government or whatever. If you ever need somebody to watch your prime minister while you're on vacation, we'd be happy to help.