Let's Help Jesus Punish That Judge For Being Mean To Poor Kim Davis! 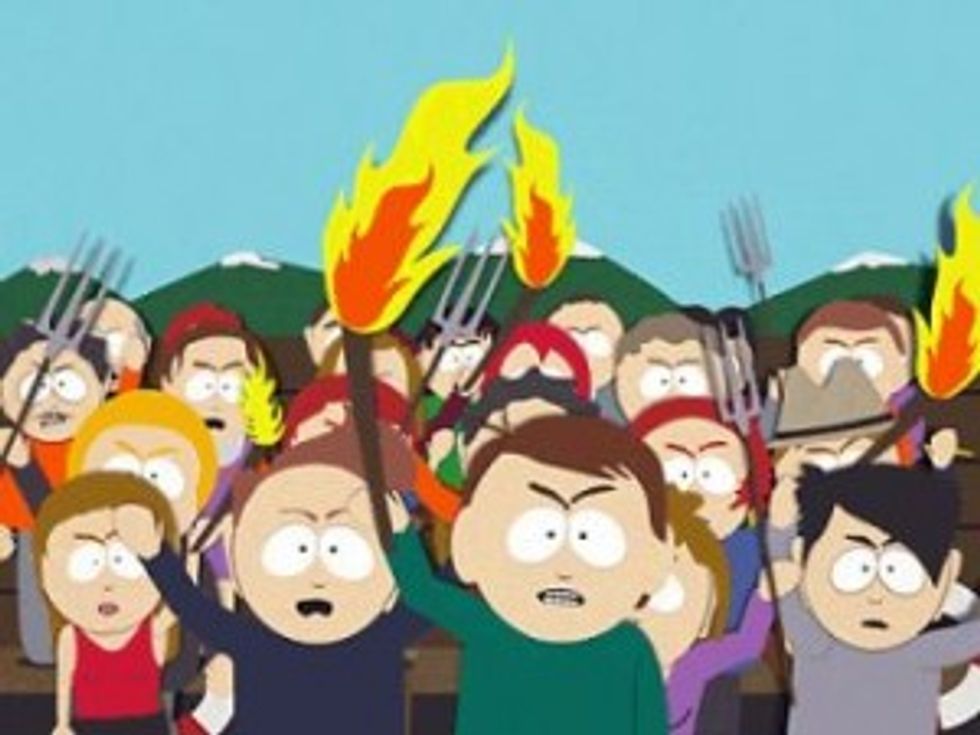 Pull out your pitchforks and trim your bushes, Christian warriors of God's love, it's time for some Crusades! How are we going to show everybody just how much Jesus loves the little children, all the little children of the world (who are not gay), today? Why, it's time to mete out the proper punishment for District Judge David Bunning, the liberal atheist George W. Bush appointee who thinks it's somehow reasonable to expect an elected official (Kim Davis) to do her fucking job (give out marriage licenses), even if some of those marriage licenses make her feel icky in her adultery spot (the gay ones). Where does Judge Bunning even get off, putting her in jail for contempt and issuing "orders," like judges can even tell people what to do? ACTIVIST DEVIL JUDGE!

Let's check in with a couple of 'Murica's dumbest wingnuts to see if they have any ideas to get a good Inquisition going against this judge. OH HELLO, BRYAN FISCHER, we see you went ahead and started thinking about this ahead of time!

He imposed a religious test on Kim Davis. He said to Kim Davis, if your religion does not allow you to affirm homosexual behavior and homosexual marriage, you can't work here. So basically, he instituted a ban on Christians serving in public office because of your religion. I'm applying a religious test to you, you've got to have a religious view that is okay with gay marriage are you are not going to be allowed to serve in public office. ... [I]t would clearly be appropriate for Judge Bunning to be impeached and to be removed from office.

No, Judge Bunning didn't do any of those things, actually. We don't like pointing it out every single time, because it makes our butt itch to have to say it so often, but this is that thing where fundamentalist brain abscesses think they speak for a majority of Christians, when in reality most mainstream Christians just want the pastor to STFU so they can get to brunch before the Baptist church gets out.

Anyway, Fischer wants to impeach. Kinda lame. Does anybody else out there have a less boringer idea?

OH HI, Larry Pratt from the Gun Owners of America, a man who sits just below garden variety crotch crickets on the "people we'd want to live next door to" list. What is Pratt's idea?

Pratt told Sam Bushman of the far-right “Liberty Roundtable” radio program on Wednesday, “This district court judge merely withdrew his horns, they haven’t been cut off. And we’re not finished until we can cut that district judge Bunning’s horns off.”

Ooh, we're going to cut his horns off! Now that's a more funner punishment than "impeach!"

“In fact, he’s the one who should be put in jail for violating his oath of office,” Bushman said.

Bushman added that Bunning didn't “get to execute Kim” only “because we all came to her defense.”

Hey, Larry Pratt and Sam Bushman, this is yr gay liberal Wonkette, and we just want to let you know that you sound like a bunch of pussies.

Pratt is the guy who says teachers who protect their kids during school shootings are pussies, and our The Blacks are not as good as Africa's The Blacks, because he's a racist, so we're kind of disappointed that his idea for punishing Kim Davis's executioner is KINDA boring too. Wingnuts are getting lazy.

Anyway, so we've got impeach, put him in jail, and cut his horns off. What other BIG SCARY PUNISHMENTS does Judge Bunning deserve, for doing his job and ordering Kim Davis to stop acting like a dickhole and do her job?