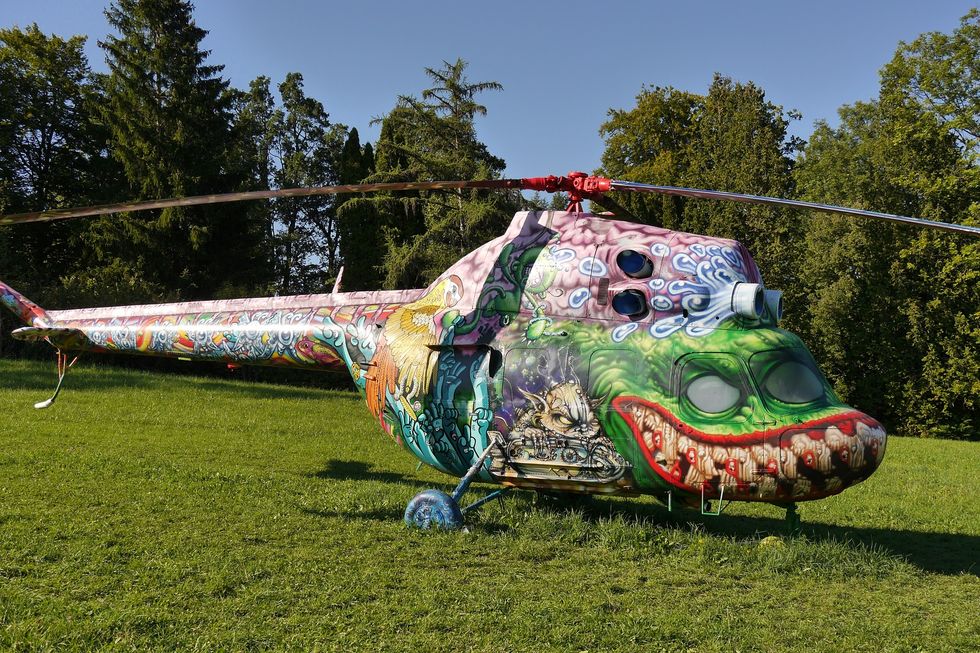 The helicopter soared over the Minnesota woods like a huge machine designed for that purpose. Inside were Donald J. Trump and his pilot, Golden Pilot, a gold plated human pilot who was very expensive.

“Nothing,” said Trump. “I was just saying ‘Golden Pilot’ because that’s why I have a Golden Pilot. So I can say its name.”

They flew in silence for a time.

“I think that’s it, down there,” said Golden Pilot. He pointed to a lake below them.

“Set us down in that clearing, my beautiful Golden Pilot,” said Trump.

The big chopper came down ponderously, but not too ponderously because it landed fine. Golden Pilot cut the motor and the sound that happens when someone turns off a helicopter happened. Trump waited until the blades had stopped spinning to egress. He waited not out of concern for his hair blowing around in the downdraft (he had the utmost faith in his hair), but to keep his cheeks from flapping like a wacky loser. He had his dignity.

But he had a problem, too: Foreign policy. People were saying it was one of his biggest weaknesses, apart from domestic policy, intellect, impulse control, and general demeanor. So here he was, sitting in a turned off helicopter by a lake in Minnesota, about to fix it.

Through a thin stand of reeds he espied a figure standing in the lake. Water was up to its knees. Its back was to him.

Trump parted the reeds with hands that were average sized and not too abnormal looking at all. He was not sure if he should speak, so he spoke:

“This is Michele,” said the figure without turning. “Wait!” the figure then ejaculated. “Do you mean Michelle with two L’s, or Michele with one L?”

“Then that’s probably me,” said the figure, and finally she turned to face him. “Donald!” she ejaculated upon recognizing her visitor.

“Well, you’re standing in a lake out in these woods, and it’s getting dark,” observed Trump.

They stood in silence for a time.

“So Michele, I wanted to come out here to talk about foreign policy. You mentioned you knew some things about it. What are the things you knew? Help me.”

This was uncharacteristic for Donald J. Trump: to be parting reeds with his normal hands to tell a woman to help him, and the woman’s standing in a lake. But these were uncharacteristic times. Trump was accustomed to everything he did coming out fine without him putting in any real work because he was born rich. But running for president was proving to be different. If this lake-dwelling female could help him, he would demand that she help him.

“If the president says, ‘radical Islam,’ that is the main thing,” explained Michele.

“If he says that, it just…” She trailed off.

“So that’s covered. Next thing, illegal immigrations. Those are foreign policies,” declaimed Michele.

“I know,” said Trump. He was becoming irritated. The semiaquatic stateswoman wasn’t telling him anything he didn’t already know. He continued: “Tell me something I don’t already know.”

“There was something about the United Nations, and vaccines,” said Michele. “Both are bad. I said this. I remember. Say this!”

“Both are bad,” agreed Trump. This was going nowhere. “Anything else?”

“Light bulbs,” said Michele. “These are a conspiracy.”

“Okay, thanks Michele,” said Trump. “That’s good stuff. I have to be going, thanks.”

Trump turned to leave, allowing the reeds to unbend back to being straight up and down.

“Wait!” Michele cried. “Are you just going to leave me here?”

Trump strode back to his sky conveyance and did ingress. Golden Pilot was waiting at the controls.

“How was your meeting with the lady who will save your campaign?” asked the gilded aviator as he made the sounds of a helicopter turning on come out of the helicopter.

“Bad,” Trump said. “She just told me things I was already doing.”

“You know what, Golden Pilot? You’re right. I did it. My campaign is saved!” hollered Donald J. Trump as he ascended to the heavens. He considered adding another comb vector to his hairstyle in celebration, then laughed at his foolishness. I’m not a kid anymore, he reminded himself. But he pretty much was, except for looking old.