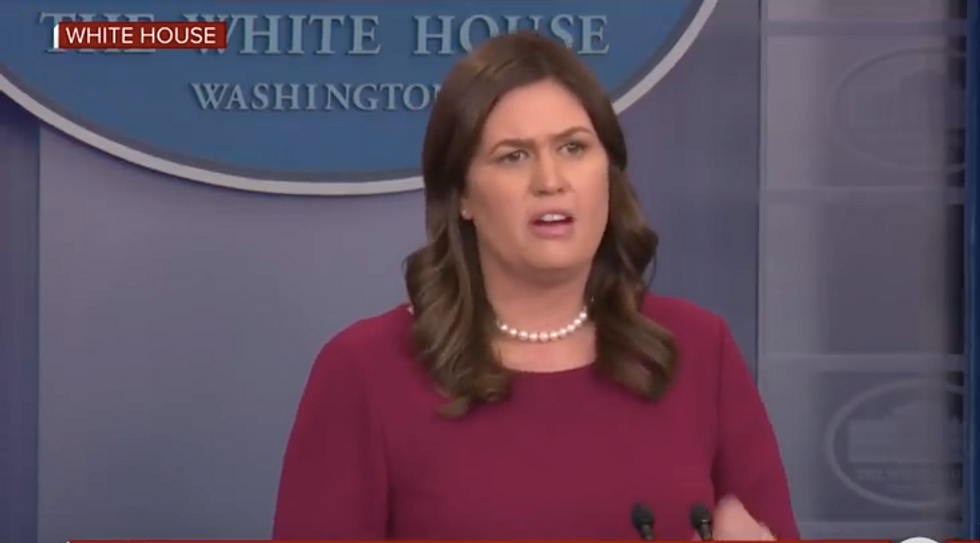 Sanders, the White House press secretary, audibly choked up during Wednesday’s press briefing as she answered a student’s question about school shootings.

The student, Benje Choucroun, 13, was at the White House covering a children’s fitness event for Time for Kids, but was called on as he sat among the White House press corps. He said his school recently had a lockdown drill.

In case you’ve been absorbed in summer vacation planning (trust me, book DC's African-American history museum months if not years in advance), school shootings are this completely preventable thing that we as an NRA-cowed nation have determined is totally not preventable by material means -- only "thoughts and prayers," which if they were in any way effective, the NRA would run fear-mongering ads against. So, really, Sanders didn’t so much "choke up" as she she just plain "choked."

“Specifically,” the boy asked, “can you tell me what the administration has done and will do to prevent these senseless tragedies?”

Ms. Sanders, her voice breaking at times, responded: “I think that as a kid, and certainly as a parent, there is nothing that could be more terrifying for a kid to go to school and not feel safe. So I’m sorry that you feel that way.”

I probably shouldn't criticize the word choice of visibly emotional people, but what the frizzy heck is she talking about? "(A)s a kid, and certainly as a parent..." Is she talking about kids who are also parents? I know the Trump administration's abstinence-only sex education policies are helping that happen more often, but isn't the whole point that school shootings are preventing kids from falling into the parent trap? Mr. Choucroun asked what the administration is doing specifically (the added emphasis above is also mine). Like, is there a plan, a strategy, a PowerPoint slide, anything? Ms. Smokey Eye, don't let us down! There's a kid in the room.

She continued: “This administration takes it seriously, and the school safety commission that the president convened is meeting this week again, an official meeting, to discuss the best ways forward and how we can do every single thing within our power to protect kids in our schools, and to make them feel safe and make their parents feel good about dropping them off.”

At this point, I'm sure the poor kid had that same sinking feeling we got when our mom would say, "We'll see," and you knew you weren't stopping at that comic book store. She'd been running errands all day, she was tired, and the store was clear on the other side of town. But this is slightly more dispiriting because I just wanted a BATMAN comic and Benje just wants to not get shot down like a dog in pre-algebra.

I suppose I should give Sanders credit for not yelling at the kid for asking an uncomfortable question, which is her usual go-to, but instead just telling him nonsense, bolstered with a genuine emotional response. Maggie Haberman at the New York Times has probably already tweeted positively about this welcome change in direction.

Meanwhile, Texas Gov. Greg Abbott "unveiled" (again, what is this word choice? Are we talking about a new luxury car?) some likely NRA-focus-group-tested plans for addressing gun violence. Some of them are even gun-related!

"We want action to prevent another shooting" like Santa Fe, Abbott said.

Abbott spoke about "school-hardening strategies," such as reducing the number of entries and exits at schools and having "active shooter alarm systems" that can be easily distinguished from a fire alarm. That approach, he said, would help students and staff respond appropriately — and avoid sending students into hallways where they might be targeted by an active shooter.

The governor also said state law should be changed to force courts to report a mental health adjudication that someone is "mentally unfit to have a gun" more quickly. The law should tighten that deadline to 48 hours from the current 30 days, Abbott said.

Abbott's plan calls for adding school marshals — teachers who are licensed to carry firearms and go through training — as well as increasing the number of marshals per campus.

"School-hardening" (i.e. turning schools into prisons with desks) is certainly a strategy. And I'm glad to see some tough door control measures recommended -- they were letting just about anyone gain access to doors. It really made the US stand out among other industrialized nations. Blaming the mentally ill for gun violence is popular these days, but as I recall, the Santa Fe shooter just borrowed the weapons he used from his freedom-loving father. Hmmm, I wonder if Gov. Abbott convened an official meeting when he came up with all this.