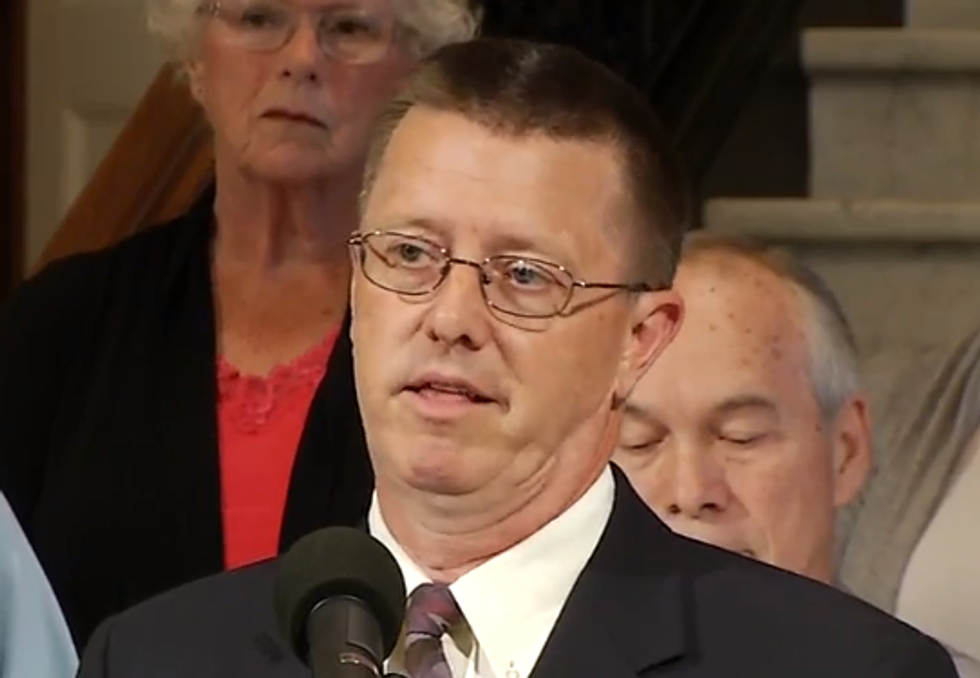 This guy is so mad about gayness he'll personally pull the dick out of your ass if he has to.

We have a dispatch from like 1975 or something, to share with all our current day readers from the Year Of Our Lord 2016! You would think that, now that marriage equality has been the law of the US American land for over a year, and all the Christians are getting murdered for refusing to write "Joe likes to bone Gary" on gay wedding cakes (PSA: that is not happening), most of our anti-gay bigots would be starting to realize that they've lost, and try to focus on other ways they can make life miserable for normal people.

We see a bit of that in the Hail Mary passes they're throwing in state legislatures all over the country, trying with all their might to make sure transgender people can't make boom boom next to THEIR WIVES AND DAUGHTERS. But there is a "new" group of Mainers who apparently didn't get the memo that their entire life's work has been a waste, and they have a new idea: LET'S BAN GAYNESS.

Mike Heath and other former heads of the Christian Civic League of Maine have formed a new group, "Equal Rights, not Special Rights."

They say they're tired of being forced to accept the homosexual lifestyle.

Paul Madore and this small group of people say they want to restore America to its former greatness by repealing same sex marriage laws and making homosexuality a crime.

"There is conduct that ought to be punished," Heath said. "And Christianity teaches, has always taught and still does teach, that sodomy is such a behavior."

Uh huh OK, great plan, we're real impressed. In the group's very widely attended press conference -- giggle! -- they showed that iconic picture of a Marine arriving home and jumping into his sexy man lover's arms, because he missed him. It is a sweet picture, but it makes religious right men like Mike Heath and Paul Madore feel the bad tingles in their pee-pee holes, allegedly. You remember this picture, yeah?

Here's what the group had to say about that pic:

"These are two military men, at least one, and there's an open expression of homosexuality and sexual expression that is totally out of line for a country as great as the United States of America," Madore said.

WHAT ARE YOU GONNA DO ABOUT IT, YOU SAD, PITIFUL LOSERS?

Oh yeah, they are going to ban the gay. Yep yep yep, any day now. Of course, in order to do so, they have to get a citizen's initiative on the ballot to get sexual orientation taken out of Maine's Human Rights Act, though local channel WGME 13 reports that Maine voters passed that thing like 11 years ago, long before butt coitus and singing Adele at the top of your lungs was so popular. Would Maine voters repeal it now? Hahahahahahaha, no. But good luck anyway, dumb dumbs!

Mike Heath is a very weird man, and on top of that, he's a failure. His rhetoric is so over-the-top and gross that people on his own side shoved him up in an attic and threw away the key in 2009, when they were trying to repeal marriage equality in Maine. (They were ultimately successful, if you remember, but then the Supreme Court throatcrammed the whole country with gayness, so whatever.)

[wonkbar]<a href="http://wonkette.com/581776/in-maine-a-chafed-ahole-gets-vaseline"></a>[/wonkbar]When gross smegma weasel Maine Gov. Paul LePage said in 2013 that Democratic state Sen. Troy Jackson "claims to be for the people but he’s the first one to give it to the people without providing Vaseline," Heath, along with his good pal Paul Madore, called a 40-minute press conference to praise the governor for his important comments on Maine's long national nightmare of ass sex.

Anyway, Mainers, have fun butt-boning while you can, because these guys have a real great track record with their initiatives LOLOL.