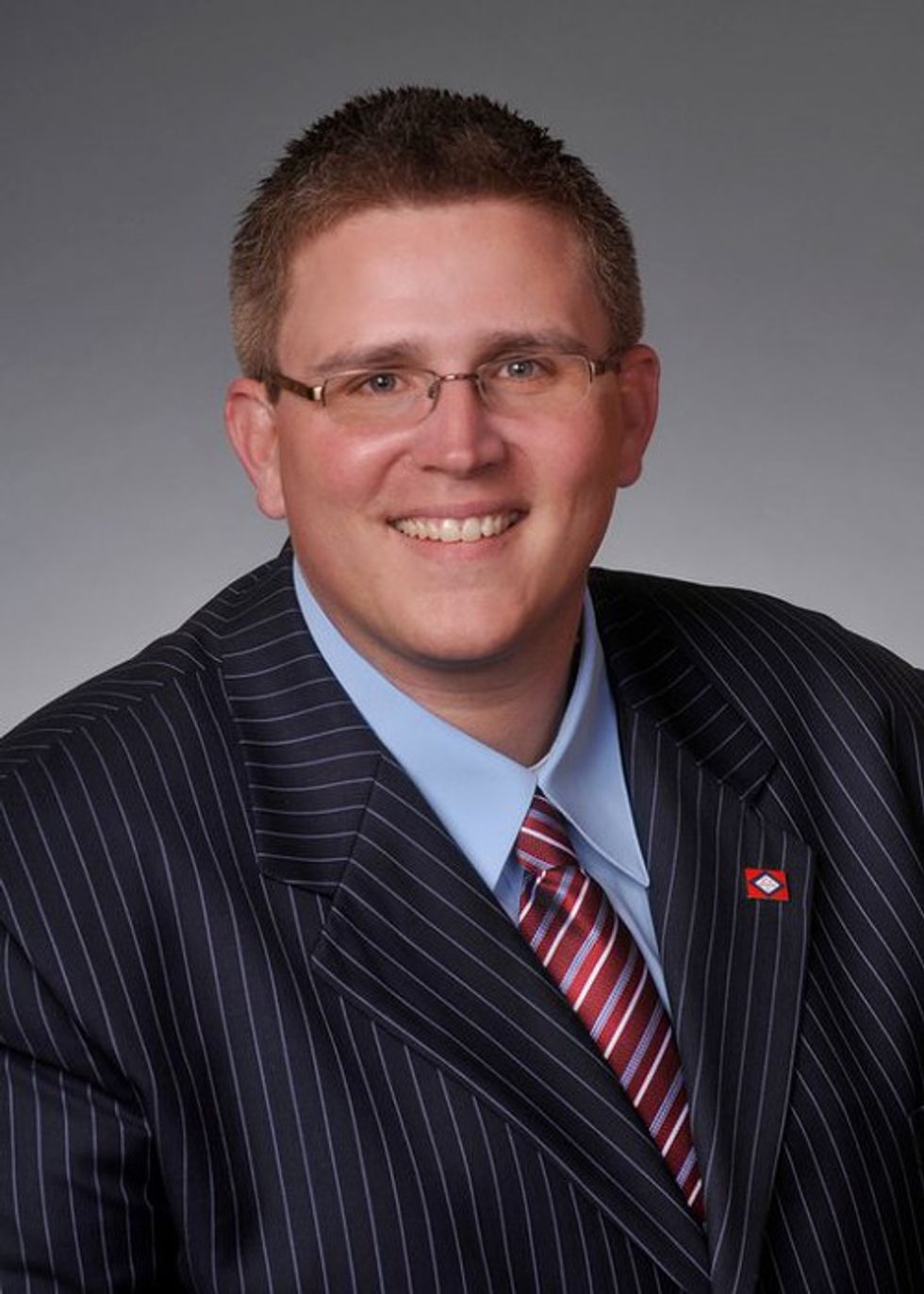 Yesterday we introduced you to the honorable Justin Harris, a proud Republican member of the Arkansas House of Representatives, who kinda-sorta hid from the public the fact that he'd adopted two little girls out of foster care, tired of them after a year in his home, and given them to another family to raise. The other family wasn't so great, seeing as how the new adoptive father, Eric Francis, raped the older of the girls, all of six years old. Francis had also briefly taught at the Christian daycare owned by Harris and his wife, "Growing God's Kingdom Preschool," and when the news of the sexual assault broke last year, that was the only connection Harris admitted publicly; the Arkansas Times broke the full story this week. It's a horrible story, and the more we find out about Rep. Harris, the more charming he seems.

For instance, Justin Harris is a small-government conservative who likes to say that government spending never created a single job -- and whose daycare business depends almost exclusively on taxpayer-subsidized tuition, as an Arkansas Times column noted in 2011:

Harris' business operates on almost $900,000 a year and serves about 150 kids. Of that, all but about 6 percent comes in the form of state and federal dollars in a program aimed at developmentally disabled and poor children. The money provides Harris and his wife almost $60,000 a year in salary and benefits. It also covers the mortgage on his privately owned building and rent payments to the Harrises. So the government spending hawk lives on government spending, a double dip of payroll, perks and rent payments.

In addition, while Harris was pushing a bill to deny state services and in-state tuition to any Arkansas residents who couldn't prove they were U.S. citizens or legal immigrants, Growing God's Kingdom Preschool was happy to take government subsidies for "perhaps a dozen undocumented students among his 150 pre-schoolers" -- not that undocumented kids shouldn't get daycare, but it's rather rich that Harris was seeking to deny benefits to some undocumented people while collecting taxpayer money for others. As columnist Max Brantley put it:

An anti-tax, anti-government-spending, anti-illegal-alien legislator is living off a government program that includes payments for kids who haven't produced proof of citizenship.

Oh, but that's not all. Growing God's Kingdom also came under fire in 2011-2012 when Americans United for the Separation of Church and State lodged a complaint against the state's "Arkansas Better Choice" (ABC) program for granting funds to the Harrises, even though Growing God's Kingdom explicitly advertised that it provided religious instruction, and would even turn out little evangelists. The preschool's handbook promised parents that teachers and staff would:

“strive too [sic] ensure that your child feels the love of Jesus Christ while preparing them for Kindergarten.” The preschoolers, it continues, will be taught “the word of God” so that they can “spread the word of God to others.”

Harris insisted that it wasn't no thing, since parents had the option of letting their kids sit out during daily prayers and Bible readings, but the ABC program later revised its guidelines to specify that no state funds could be spent on religious instruction during the school day. So Harris once again took a strict course of sorta-compliance, saying he would shift the prayers and religious instruction to after-school hours only. And of course, he complained that his state-subsidized clients were being discriminated against, because while he can't stand Takers, he sure loves parents and little children:

“[State Legislators] are going to have to look and just say, ‘You know what? If you’re rich you can go to a Christian pre-school. If you’re not, then too bad,” said Harris, explaining that low-income families would have to then be re-located to public schools.

Hey, isn't that class warfare? Not at all -- it's the call of Liberty and Equality.

But what about Justin Harris the Public Servant? What are his legislative accomplishments? As we noted in our earlier post, last week he was very sad to see the House Education Committee kill a bill he'd introduced that would have protected children's rights to religious expression at school, presumably so that children wouldn't be punished for wearing their "I ♥ Satan" t-shirts. The bill was defeated when other lawmakers noticed that we already have a First Amendment. He's also filed another bill to protect the sacred rights of students and teachers to say "Merry Christmas," thus doing his part to protect Christendom from imaginary boogeyatheists who want to jail most of the population every December.

On the more pernicious side, our intrepid Daycare Entrepreneur introduced a bill this week that would weaken the requirements for sprinkler systems in child care facilities. Under Harris's proposal, daycare facilities wouldn't be required to have sprinklers or other fire suppression systems unless they have "commercial cooking equipment." After all, everyone knows that plain old regular kitchen stoves never cause fires.

Yes, let's repeat that: Justin Harris owns a preschool, and he wants childcare facilities to be free to operate without sprinkler systems, just as long as they aren't using commercial-grade ovens, stoves, or fryers. Presumably, Jesus will protect the little tykes just as well as some expensive sprinkler system would. We're looking forward to his next bill, allowing daycares to let kids play in traffic as long as there aren't any tractor-trailer rigs in the mix.

Harris has also introduced a bill to toughen up the Arkansas law that already requires parental consent for minors to get an abortion; Harris's improvement to the law would more strictly limit how judges would handle requests from pregnant minors who petition courts to get an abortion without parental consent. There's still an exemption from consent for victims of incest or abusive parents, but for minors who simply don't want to get parental consent, Harris has upped the judicial ante considerably. The current version of the law allows a judge to allow the abortion when a judge decides that a pregnant minor "is mature and capable of giving informed consent" and that bypassing parental consent would serve the minor's "best interests." That's all -- and the judge has to write up their findings.

Harris's bill sweeps away all that vagueness and offers any number of measures of maturity judges should consider, including the minor's age, her experiences doing adult stuff like working outside the home or managing money, and whether the pregnant minor adequately explored all her options (and how much thought she gave to each option), as well as considering "the pregnant woman's conduct since learning of her pregnancy and her intellectual ability to understand her options and to make an informed decision," which we suppose may mean that she'd better not be out dancing to rock-n-roll if she wants to prove she's mature enough to decide for herself. And just for a nice kick in the head, the bill specifically bars judges from considering "the potential financial impact on the pregnant woman or her family if the pregnant woman does not have an abortion." So no abortion for you if your only reason is that you can't afford a baby, you slut.

After the pregnant minor clears all those hurdles, the bill empowers the court to mandate that she attend counseling to make sure she really, truly understands what's going on, and the counselor "may employ information and printed materials in examining how well the pregnant woman is informed about her pregnancy, fetal development, abortion risks and consequences, and abortion alternatives." And regardless of whether the minor gets an abortion with parental or judicial consent, she'll also have to be advised of all the ways an abortion can harm her, plus she'll have to sign a statement that she "understands that the doctor is going to perform an abortion on her that will end her pregnancy and will result in the death of her unborn child."

Or she could always give the baby up for adoption and hope the adoptive parent doesn't get tired of the kid and give her to some child molester to raise.

Since the Arkansas Times ran its story on Harris and his perfectly legal technically-not-abandonment of his adopted daughters at the home of a man who went on to rape one of them, there have been some additional developments. Rep. Greg Leding filed a bill that would criminalize the practice of "rehoming" an adopted child with anyone outside of the adoptive parents' family. Doing so would be a felony. In a blog post, reporter Benjamin Hardy, who broke the Harris story, wonders if the bill will "go to the child welfare committee of which Harris is vice chair?" Assuming he stays in office any length of time.

Update: According to Trackbill, the bill will be going to the House Judiciary Committee. Harris is not on that committee.

Arkansas Gov. Asa Hutchinson's office also issued a statement stating that he "recognizes the valid concerns over the issue of 'rehoming' and will ask DHS to review this practice and to determine what changes in rules need to be considered." So hey, chalk one up, at least in the early rounds, to the power of the free press and investigative journalism.

Benjamin Hardy also notes that one of Harris's House colleagues, Rep. Nate Bell, went ballistic over the story, emailing Hardy to advise him that Harris is "a good man ... who has given [his] life to helping vulnerable children," while Hardy, by contrast, is "the lowest fork [sic] of muckracking slime on earth" and informing him that "Hell has a special corner for the merciless. You're headed there. Invest in asbestos." They sure do have a way with words in the Arkansas legislature. After Hardy replied and pointed out that he was disappointed that Bell, usually an advocate of transparency in government, objected to news of a fellow legislator putting his adopted daughter into danger, Bell tersely warned Hardy to never contact him again, on pain of being charged with criminal harassment. He seems nice.