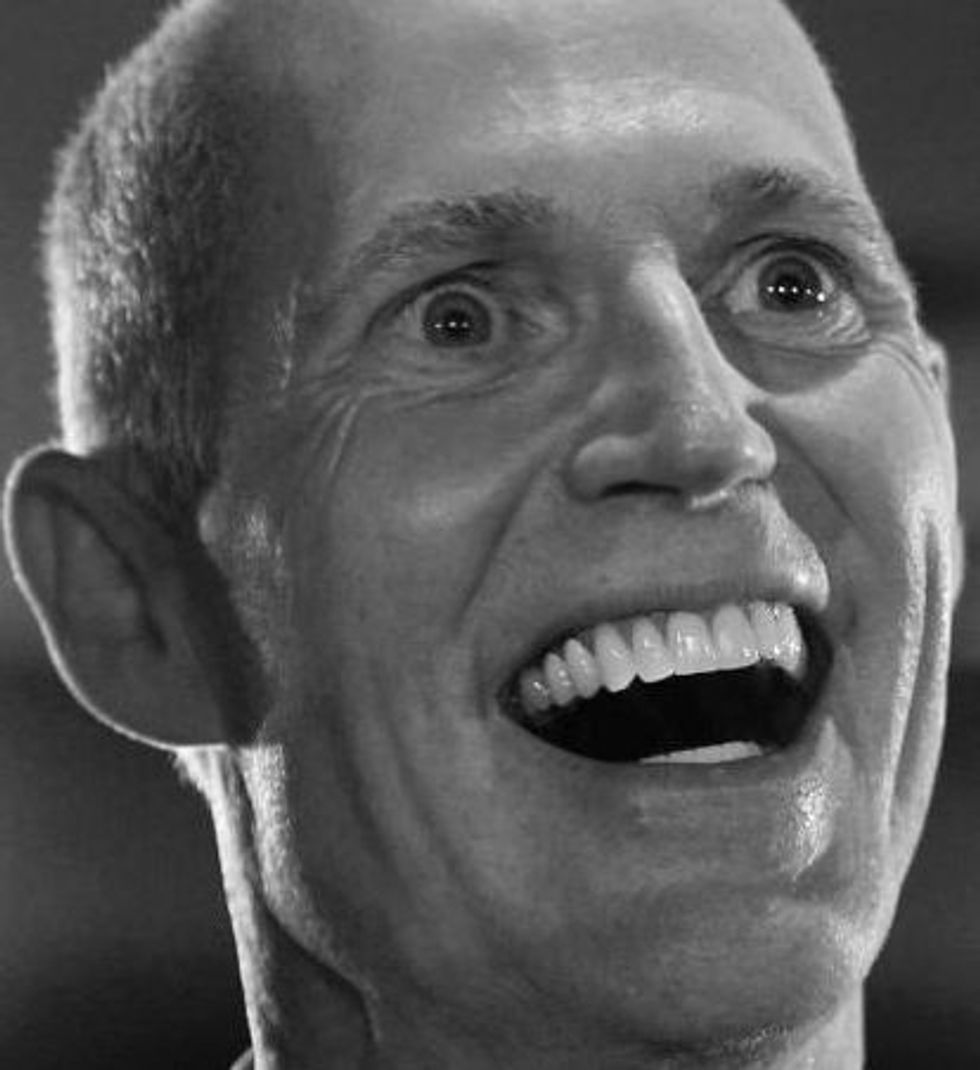 Guys! We just figured out why the Trump presidential transition process feels vaguely familiar to us, even though nobody like that ambulatory gunny sack of spite, lies, and hair has ever been the nation's chief executive before. Trump's transition is exactly like the start of an epic comic book story, where all of the super-villains break out of Arkham Asylum, depart from their bases under extinct volcanoes, and answer the uncanny call of evil to gather at The Joker's latest underground lair. There's some fussing and backstabbing, but eventually they unite in their goal to rid the world of Superman, or at least rule the world. Speaking of which, Florida Gov. Rick Scott is headed to Trump Tower New York today to kiss the Great Man's Ring of Unworldly Power and also -- we swear we are not making this up -- to share his ideas on how to "reinvent the federal government," according to Scott's spokesperson Jackie Schutz. It is uncertain which arcane evil powers Scott will bring to Team Trump, although like the president-elect, Scott has an intimate knowledge of getting rich by cheating, having resigned in 1997 as CEO of Columbia/HCA while the company was being investigated for Medicare and Medicaid fraud. Trump bragged that only he could fix American politics because he was so intimately familiar with the crooked system, so it only makes sense Trump's considering appointing Scott as secretary of Health and Human Services. Now we just need to figure out who'll be Harley Quinn in this movie.

Scott's involvement in what's been called the "largest Medicare fraud in the nation's history" is no secret, and has been an issue in both of his campaigns for governor, although since he's won two terms, Floridians aren't especially worried about a little bit of fraud. The real shame would have been if he'd lost money on the deal. When Scott ran for re-election in 2014, an HCA accountant who helped with the FBI investigation of the company said Scott was aware of the fraud and "shouldn't be trusted," adding that he had no doubt that Scott "was the leader of a criminal enterprise," but what were voters going to do -- elect a Democrat? No, sir! Besides, Scott was never charged with a crime, which means he has been 100% cleared of wrongdoing. It's not like he had an email server or something.

[wonkbar]<a href="http://wonkette.com/546123/yes-red-states-not-expanding-medicaid-is-actually-killing-people-but-you-knew-that"></a>[/wonkbar]We can see why Scott would be an attractive choice for Trump. Not only does he know how to milk the government for big bucks, he also knows a thing or two about keeping poor people from having health insurance -- Scott's refusal to expand Medicaid has actually killed people, making him an ideal candidate to oversee throwing over 20 million people off of health insurance. Not that denying health care has ever been a problem for Scott -- he also defunded Planned Parenthood over that video that didn't actually show fetal parts being sold off on eBaby.

Most importantly, Rick Scott belongs in the Trump administration because Rick Scott is an asshole, and so is Donald Trump. So let's kick Scott upstairs so he can run the very department he defrauded. Keep an eye out for Trump to pardon Bernie Madoff so he can be appointed to head the Securities and Exchange Commission.

Kind of a bummer that the potential hero of this story got a million more votes but lost in the Electoral College.