Let's Watch Losers Debate A Man Who's Not There. Your Republican Debate Preview 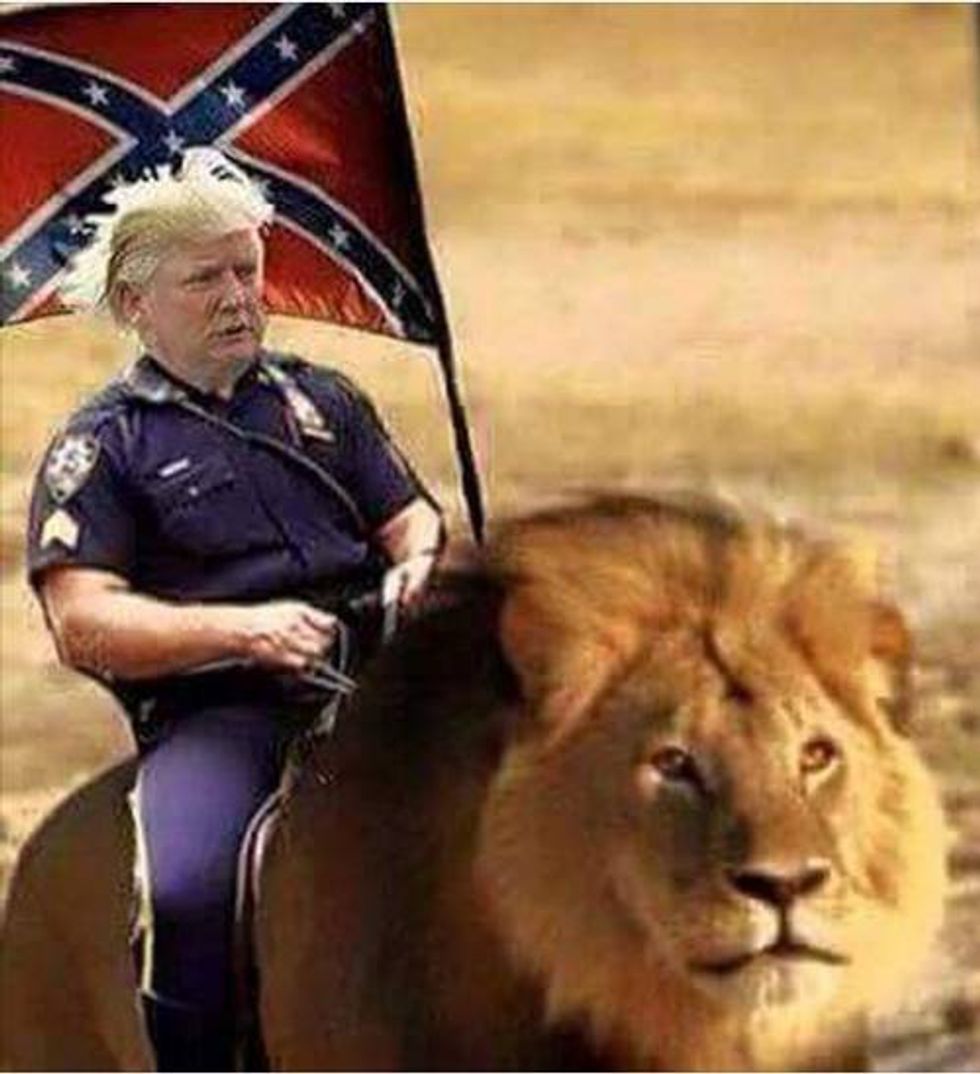 Maybe since Trump is playing hooky from the debate he can ride his confederate lion for the first time in forever.

Whee, one more Republican debate before Iowa votes, after which somebody will win the Iowa caucuses and nobody will drop out and we'll have a million more debates, even after Hillary Rodham Clinton's two terms as president are over. And it's tonight! What's going to happen? We don't know, do you? Pffffft, you don't know. Let's make up the answers together like we always do:

Is Donald Trump actually staying home to jerk off to his daughter Ivanka's Glamour Shots?

[contextly_sidebar id="yiDymHfY5zmt888PBvEzExOM6sKYZ0np"] That's what his campaign says, because The Donald is so mad at that mean period-bleeder Megyn Kelly. He's going to do his own thing, and it's going to be yooge and classy, and take THAT, Fox News, see how you like debates now!

But Ted Cruz challenged him to a duel and everything! Maybe they can do that instead of doing the Fox News debate?

Look, Ted Cruz's hatred for Donald Trump strikes us as a "thing I can't have" sort of thing. Remember back in the day when Ted Cruz used to be all gay for Trump? It was like this:

[contextly_sidebar id="FfNLKeCzYRvZ1oIB1uz0Ur5HwwanzmNT"]But then Donald Trump started pointing and laughing and telling Cruz to put his Canadian Pesos where his mouth is.

Cruz has challenged him to an All By Myself sword fight, to be held somewhere a little more private, far from Megyn Kelly's bleeding wherever and mean Fox News. Ted will probably wear this tonight, on the off chance Trump decides to show up and  fight him like a real man:

[contextly_sidebar id="GgEaXBsUEhYdSYPvp3y6Au3C6aXuvzxe"]Word on the street has it that Cruz's choice of outfit was inspired by the prime minister of his homeland, Justin Trudeau, who could grind Ted Cruz's poutine curds into a fine dust with one hand tied behind his back while tongue-kissing yr Wonkette, if he was in the mood to do that, we're just saying.

We will never tire of posting that picture.

Anyway, no duels tonight probably, though Trump has shown a willingness to meet Cruz on his own turf:

Megyn Kelly, the mean she-trollop who started this. She moderatin' again?

Yep, let's see who she can gush her monthly visitor on this time!

How much chipper-giggle-cum did Jeb do on hisself when he found out there would be a debate with no mean Donald Trumps teasing him just like his mom does?

That's just Jeb with his head stuck in a zipper.

Your mother's head was stuck in a zipper last night.

OK, what else? Anybody we haven't seen in a while?

Rand Paul is back, hooray for Rand Paul! After his embarrassing poopy-tantrum last time about how no fair it was that he didn't get to go to the Big Boy Debate, stomp stomp stomp, we guess Fox had pity on him.

What is a 'Gim Jilmore'?

We think you spelled that incorrectly, but we could be wrong, because he probably doesn't even exist in real life.

So who are the big important candidates in the grown-up table debate?

Here's your lineup: Ted Cruz, Marco Rubio, Jeb! Bush, Chris Christie, Ben Carson, John Kasich and ... oh yeah, Rand Paul! Haha, Rand Paul, we remembered the name "John Kasich" before yours. You suck so much dick, and not in the good way.

So, you mentioned a loser kids table debate, which makes us want to die, but who's in that one?

You think YOU want to die? Imagine how we feel! But that debate will feature Mike Huckabee, Rick Santorum, Carly Fiorina and that Tim Spillmore dude we just mentioned.

Hey Wonkette, I just threw up every organ in my body from that mental image, gonna reimburse me for that?

Not a fucking chance, you know what you're getting yourself into when you come here.

Ugh, what time is this goddamned thing on?

9 PM ET for the growned-ups, 7 PM ET for the sad winkie dick wannabe debate. It will be on the Fox News television channel, or you can watch it on their website, or you can not watch it and just read our jokes. Whatever, we don't care.

Man I sure wish I could give some money to a Kickstarter for a fun-filled card game featuring all these candidates, made lovingly by my Wonkette!

We got yr Kickstarter RIGHT HERE, in our pants.

You will be liveblogging this into our mouths, right?