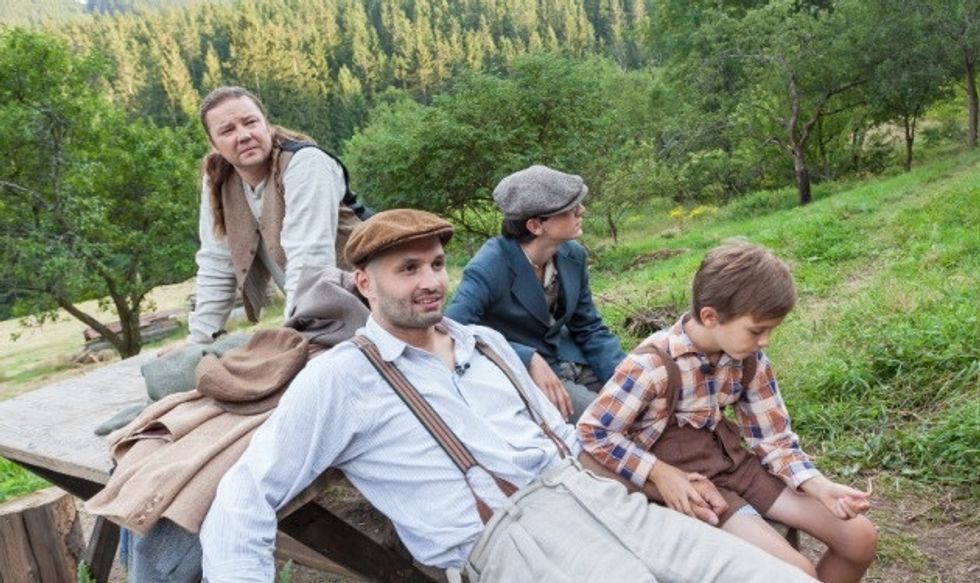 American reality television is having a rough summer reputation-wise, what with the failed Bachelor pairings and the creepy wifely subservience and the repellent allegations of sexual abuse of children. Maybe our camera crews should try for a wholesome reboot and set up shop in a nice spot in the country with a full complement of Nazis.

American TV execs should try learning something from Czech public broadcaster Ceska Televize's Dovolená v Protektorátu, or Holiday in the Protectorate. This eight-episode series is set in a simpler time and place, namely "the Czech-ethnic Protectorate of Bohemia and Moravia, areas of the present-day Czech Republic then ruled by a puppet government established by the Nazis."

In a remote mountainside village, a frightened Czech family struggles under the privations of Nazi occupation, with food rationed and Gestapo spies everywhere, as German soldiers patrol the streets.

The scene is not a costume drama, but the first episode of a controversial new Czech reality show that features a modern-day family living among actors who play Nazi soldiers and the hamlet's other residents, in an attempt to recreate life under the Nazis during World War II.

Three generations of a Czech family spent about two months under fake Nazi rule during the show's taping last summer. The series is set to finish airing in June, so the world hasn't yet learned if they made it through the "paltry rations, German soldiers, Gestapo interrogations, blackmailers, and Allied bombing raids" to win the prize of ONE MILLION CZECH KORUNA (around $40,000).

We imagine that the Czech people who actually lived in the Protectorate with the real Nazis would have appreciated a wheelbarrow full of money for surviving, but they were probably feeling lucky if their villages weren't destroyed, with their young males murdered outright and everyone else shipped off to the camps.

Some people who don't understand the television industry at all are complaining that the series is tasteless, a charge denied by its director, who claims she has great reverence for the suffering of Czech people under Hitler's rule and had historians and a psychologist on board to make sure the participants weren't harmed by her creative reinterpretation of the Stanford Prison Experiment:

"I spent a long time looking for a concept that would allow me to show life in another era, while ensuring the highest level of authenticity," said director Zora Cejnkova.

Unsurprisingly the concept has stirred angry reactions far beyond the Czech Republic, even by the standards of a television genre rarely noted for its cultural sensitivity.

"Fortunately for the family, they will not be treated like the 82,309 Jews who lived in the Protectorate and were deported by the Nazis to concentration and death camps, or were killed by Czech collaborators," one columnist in the Times of Israel wrote.

"Critics ask whether 'Big Brother Auschwitz' is next," read a wry subheading to the column online.

Around 360,000 Czechs and Slovaks perished during World War II.

Reality television continues its death spiral into the deepest depths of the human experience. If Holiday in the Protectorate turns out to be a hit, we'll be expecting more exciting WWII-inspired shows rushed into production. Survivor: Kristallnacht, here we come.