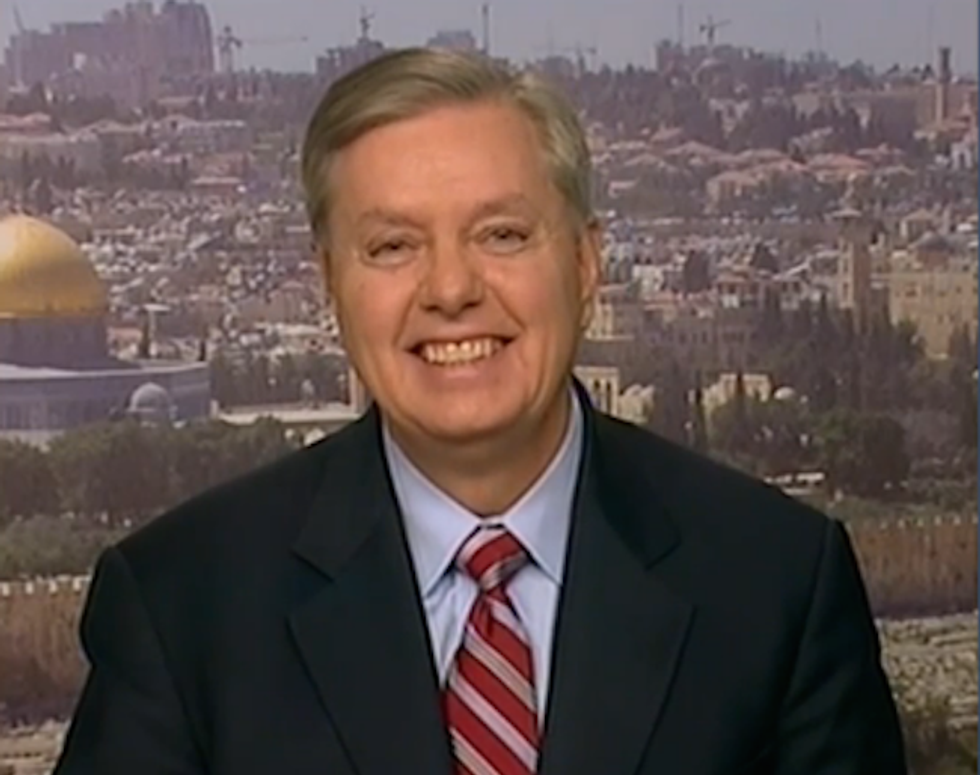 Sen. Lindsey Graham, South Carolina's most genteel gentleman and apparently the bastard son of John McCain (who knew?), has been testing the waters "to look beyond South Carolina as to whether or not a guy like Lindsey Graham has a viable path" to the White House.

The answer is a resounding "hahahahahaha are you kidding?" -- and Graham's big ol' outreach eff-up on Tuesday, following Israeli Prime Minister Benjamin Netanyahu's address to Congress, certainly doesn't help him:

In a private fund-raiser after the speech, Republican Senator Lindsey Graham pointed to Pelosi’s behavior as evidence that a Republican majority is better for those who support Israel. “Did you see Nancy Pelosi on the floor. Complete disgust,” he said, according to one attendee. “If you can get through all the surgeries, there’s disgust.”

Oooh, good one, Lindsey! Because, like, Nancy Pelosi is super old, unlike 59-year-old strapping young disco studmuffin Graham, and you know how old ladies do all that surgery to their old lady faces to cover up how they are so old, UGH, amirite?

Apparently no, because even Graham was able to recognize -- after the entire internet pointed it out to him -- that maybe making "jokes" in private about how Pelosi is a gross old hag is not the best way for him to demonstrate his mass appeal beyond the borders of his own bedroom, let alone South Carolina.

Oh, so according to Graham, he did have a legitimate criticism (not really) of Pelosi's "disturbing" reaction to Netanyahu's speech, but it was apparently buried under his highbrow humor about her old lady face. Yeah, that's presidential all right.

Graham has a history of deep-throating his own foot, especially when it comes to telling "jokes" in private to show what a man's man he is. Last October, he gave a speech to the Hibernian Society of Charleston, in which he "joked":

I’m trying to help you with your tax status. I’m sorry the government’s so fucked up. If I get to be president, white men in male-only clubs are going to do great in my presidency.

No, but kidding aside, fellas -- oh, and ladies, also ladies! -- Graham really does want to be president of all the U.S. Americans, and that will totally happen if he can just learn to stop "joking" about how he actually only cares about his rich white Dixie bros. Before someone starts thinking he isn't just joking after all.