Lindsey Graham Running For President, Will Kill You For Your Thoughts If Elected 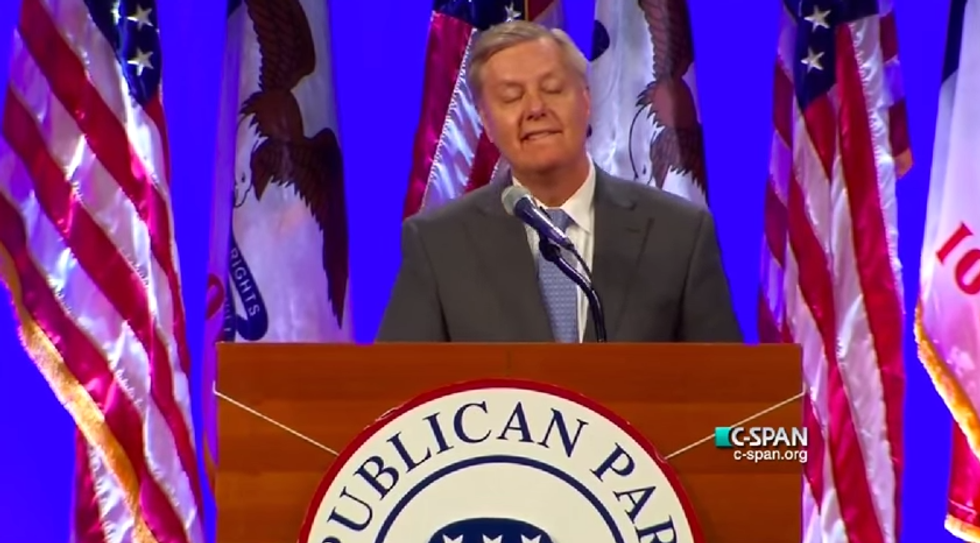 Sen. Lindsey Graham, the southern gentleman from South Carolina, has been threatening for months to run for president, promising to be an excellent president for rich white men everywhere and to "literally use the military" to force Congress to do his bidding. Why does he think he can win? Who exactly does he think will vote for him? No idea, but we laughingly welcome him to the race, as he announced on Monday his intention to announce his intention to run for president, which is how presidential campaigns work nowadays. And he's got a real optimistic Reaganesque morning in America pitch to voters:

"I'm running because I think the world is falling apart. I've been more right than wrong on foreign policy," he said in an interview on "CBS This Morning" Monday.

Addressing the question of whether he's looking to fill a gap in foreign policy experience among the GOP contenders, the South Carolina Republican said, "It's not the fault of others or their lack of this or that that makes me want to run. It's my ability in my own mind to be a good commander-in-chief and to make Washington work."

As long as he thinks he'd be good at the job, that's one vote he can count on. Probably.

At the Iowa Republican Lincoln Dinner this weekend -- another in the endless season of events in Iowa where Republicans suck up to pig farmers and pretend to enjoy deep fried butter on a stick, only they wear fancier clothes for this one -- Graham introduced a new plank in his foreign policy platform, and this one is sure to win over precisely no one:

You gotta love a guy who promises to execute American citizens just for having naughty thoughts. It's bold. It's innovative. Heck, it's downright mavericky. (But then, he is the bastard son of John McCain, apparently, so it runs in the family.) Graham is the same numbnuts "expert" on foreign policy who thinks that if only our current president would declare a holy war on "radical Islamic terrorists," and maybe invade France, we could finally accomplish something.

Graham also said at the dinner, "When it comes to blaming people about Iraq, the person I blame is Barack Obama, not George W. Bush." Sure, makes sense, since Barack Obama is the one who got us into that mess in the first place. But according to Graham, Bush "corrected his mistakes," the "surge worked," and we'd pretty much wrapped things up until Obama made a mess of Iraq and un-won the war by thinking it was over and OK to bring the troops home, as one does when a war ends. But President Graham? He will NEVER bring the troops home. He promised he will leave troops in Afghanistan FOREVER, and Iraq, and any other countries he might choose to invade. Some of y'all are gonna have to go over there and stay there, and maybe die, sorry, to keep the terrorists from killing us over here. That's President Graham's job. And if you question his methods -- which you shouldn't do, he is A Expert, he has been to Afghanistan 23 whole times -- well, he might have to call the drones on you AND KILL YOU. That's the kind of big-dicked tough guy president Lindsey Graham will be.

Or maybe he's just joking around again, like that time he HAW HAW "made a very poor attempt at humor" by "joking" that Nancy Pelosi's plastic face was disgusting. With Graham, ya never can tell when he's "joking" or when he is dead serious about killing us all. At least a Graham presidency would keep us all on our toes and fearing for our lives. Exciting! Graham 2016.