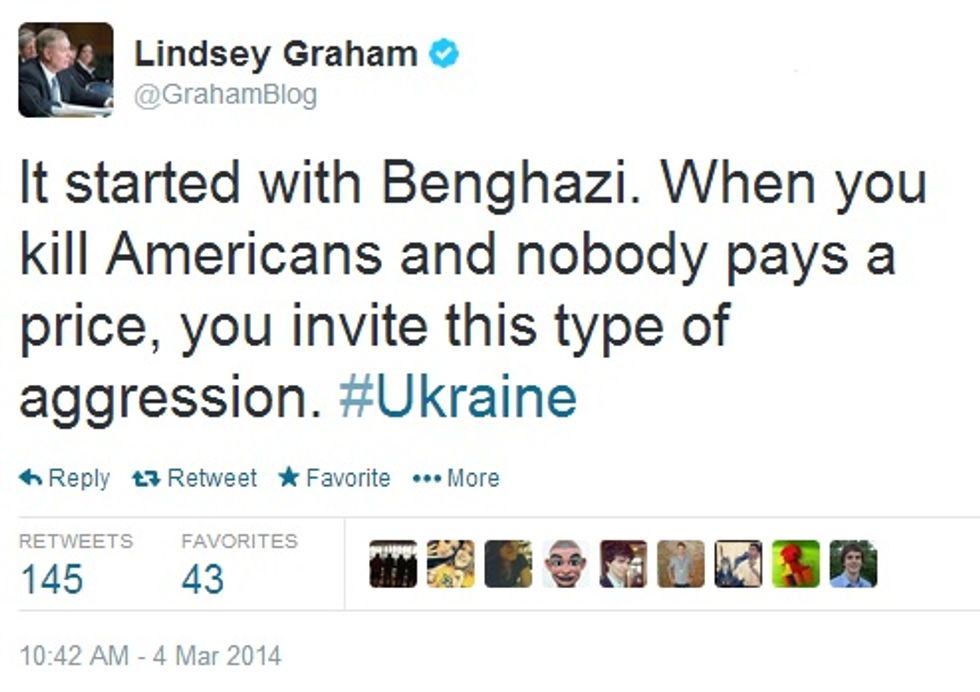 Looks like the"Barack Obama's weakness let Ukraine happen" trope has reached its apotheosis with this tweet from Sen. Lindsey Graham, with its inescapable logic: Barack Obama let Benghazi happen, therefore Ukraine. It's just like that time when Reagan knew that somebody had to pay for the bombing of the Marine barracks in Beirut, so he invaded Grenada to show Hezbollah who's boss. If Obama had just kicked somebody's ass -- anybody's -- we would surely not have seen Russia trying to reclaim parts of the old Soviet territories. Remember how George W. Bush's swift vengeance for 9/11 completely dissuaded Vladimir Putin from invading Georgia in 2008?

Sadly, Sen. Graham's foreign policy analysis did not impress Michelle Malkin, who told the South Carolina amateur to stop embarrassing himself and leave the deep thinking to those who can handle it: rightwing bloggers.

Yeah, jeeze, Mr. Senator, Benghazi and Ukraine are nothing like each other -- Benghazi was far, far worse, because Americans died.

We aren't quite sure what to make of this terrible wingnut-on-wingnut violence -- the idiot enemy of my idiot enemy is still an idiot, after all -- so we may just have to agree with "Yes, You're Racist" bloggy guy Logan Smith's final score on this particular manifestation of internecine twitter warfare:

We just hope that this obvious dissension and bickering between these two guardians of Freedom doesn't give Putin any ideas.