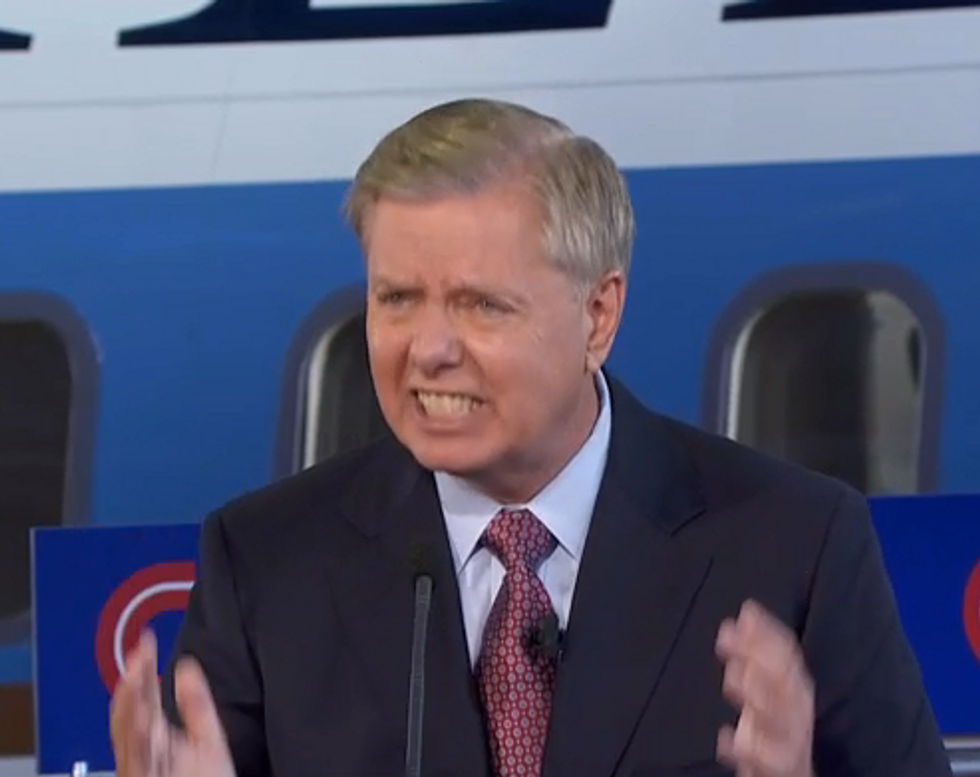 But gahhhhh he hates that guy!

“A good Republican would defend Ted Cruz,” said Graham, of the Texas senator, before quickly adding, “that ain’t happening.”

“If you killed Ted Cruz on the floor of the Senate, and the trial was in the Senate, nobody could convict you,” Graham said, as the audience erupted in both laughter and some “oohs.”

It's funny because it's true! Really, it's true. That is how much Cruz's Republican colleagues in the Senate hate every single inch of his poutine-lined intestines. Cruz's best friend in the Senate is Minority Leader Harry Reid (D-Troll Town), who recently damned Cruz with praise for at least having an ethos, dude, even though his ethos is terrible for America. All of which makes this latest news knee-slapping side-splitting HI-larious:

According to the invitation reviewed by POLITICO, which could be in its draft stages, Graham will headline a fundraiser for Cruz on Monday at Clyde’s Gallery Place. Tickets start at $1,000.

The event, which is held the same day Cruz will address the American Israel Public Affairs Committee, is described as a fundraiser to “honor and support a great friend of Israel, and the Jewish people, and the next President of the United States, Ted Cruz.”

"He's the best alternative to Donald Trump,” Graham said in a statement.

[contextly_sidebar id="SkCE8G2HNMikf2OfHVYM6PZW9ciF8Ly6"]"Vote Cruz Because He's A Teeny Smidge Better Than Openly Fascist Donald Trump" is Cruz's entire strategy at this point, though it's hard to fit on a campaign button. If Cruz can win over Lindsey Graham, what with his being Not Trump, it just might work! (It will not work. And if it even looks like it will work, Trump's shit-kickin' supporters have been explicitly inspired, by Trump, to riot so hard at the Republican National Convention in Cleveland this summer to see to that.)

Poor Lindsey. We know that this, uh, "endorsement" of Cruz was really hard for him. He's been struggling to come to terms with it for weeks:

"You know Ted Cruz is not my favorite, by any means,” Graham, who dropped his own bid for the White House in December, said in an interview with CBS. “But we may be in a position where we have to rally around Ted Cruz as the only way to stop Donald Trump, and I'm not so sure that would work.”

[contextly_sidebar id="gdcNGS2oBgCt9Pe7yjNqzwOHkdRNy2zB"]Yes, we do know. Ted Cruz is not anyone's favorite. That is why the Republican Party is ripping itself to shreds right now and threatening to revolt -- against itself! -- because it has created this despicable monster that is the Republican Party. Once this horror show is over, it's probably going to need to do another autopsy on itself to figure out how it failed to learn any damned lessons from 2012 or 2008 or ever.

[contextly_sidebar id="Eww6WOqy8xBGx2l7LDqjQFtity0fHzoL"]We expect to see other Republicans slowly make the excruciating choice Lindsey Graham has, to suck it up and say "Ughhh, Cruz I guess if we have to." But it's gotta hurt so bad for him, when deep down he'd love to murder the guy instead. Have yourself a few shots of Jameson, Lindsey. We know you probably need it right about now, and you're a lot more fun when you're drunk anyway.