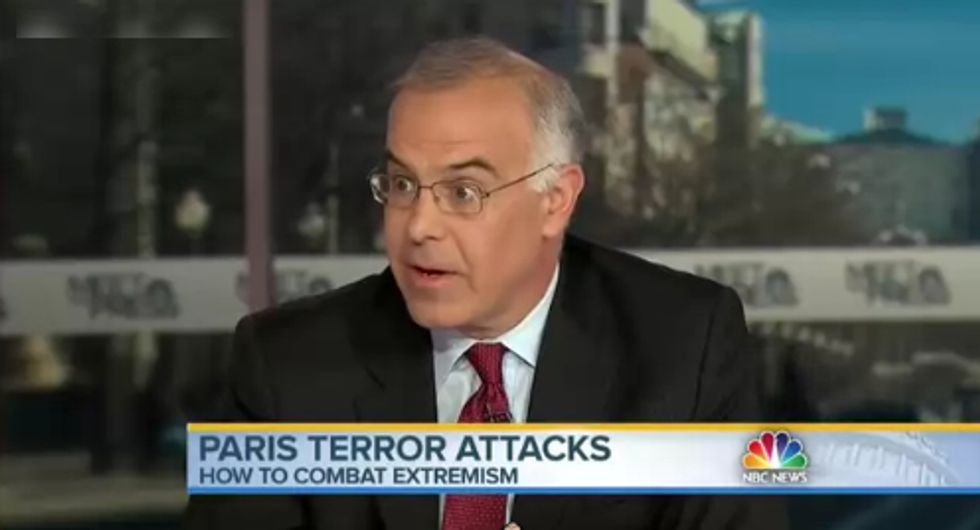 Sometimes David Brooks says things that are true or correct. However, this does not occur in the above clip from Meet the Press, a popular television fiasco. Not even once!

Can we divide David Brooks' clump of TV words into complete sentences and explain why each of them is wrong? We can.

Host Chuck Todd opens the clip by stimulating Brooks with a word clump to the effect of: "Seventeen in Paris, thousands in Nigeria, Boko Haram, Islamic Fungameliss, what the hell dude?" Brooks begins:

"Well, it's failed states, and I would say, say you're in college or you want to give money to bed nets."

WRONG: France is not a failed state. All the suspects in the French attacks were French citizens born in France. Nigeria, while not as French as France, isn't a failed state either. None of the Fund for Peace's top five "fragile states" -- South Sudan, Somalia, Central African Republic, D. R. Congo, and Sudan -- are known as exporters of Islamic terrorism. Brooks continues:

"We give to clean water, all that anti-poverty stuff."

"The central anti-poverty program is law and order."

WRONG: In a lot of different ways! The way Brooks meant it (we guess) is that if you're living in a Hobbesian state of nature, a "bellum omnium contra omnes," you might say, then it's hard to be anything other than desperately poor because you're constantly getting robbed and murdered. Eh, we'll give it to him. But let's consider other possibilities. Let's consider that the agents of "law and order" in your country might be the lackeys of a corrupt authoritarian state, themselves petty criminals extorting your labor, money, even your humble bean-meal. Or let's say your country generally defines "law and order" as "disproportionate policing of minority communities, characterized by frequent use of extreme force and quantifiable racial biases in policing and sentencing that create and perpetuate a durable if not permanent underclass." What then, David Brooks?

"You can't get rich if you're afraid of getting shot in the back of the head at night."

"And so if you're giving as an individual, if you're thinking of the state, giving to law and order groups like International Justice Mission and other things like that, that is actually the basis to get an anti-poverty poverty program."

WRONG: Like, International Justice Mission is probably fine? But they're not going to be like "Yo, D. R. Congo, how about getting a little more stable, hmm? You know, the state of perpetual war and lawlessness, maybe cut that out?" and it's somehow going to work. Really, the "basis" to "get and anti-poverty program" is to "get an anti-poverty program." That is, give money to poor people. David Brooks, holy shit!, continues:

"So Bono is doing great stuff with the diseases, the Gates Foundation."

WRONG: Bono broke his whole arm pretty much off in a cycling accident in New York City's Central Park, a failed state, so he's probably taking a break from the lab where he does "great stuff with the diseases." Mercifully, David Brooks concludes:

WRONG: International aid organizations like Doctors Without Borders and Action Against Hunger operate in all of the world's most lawless states. It's not ideal, but it's a fact that saving lives sometimes has to come before law and order.