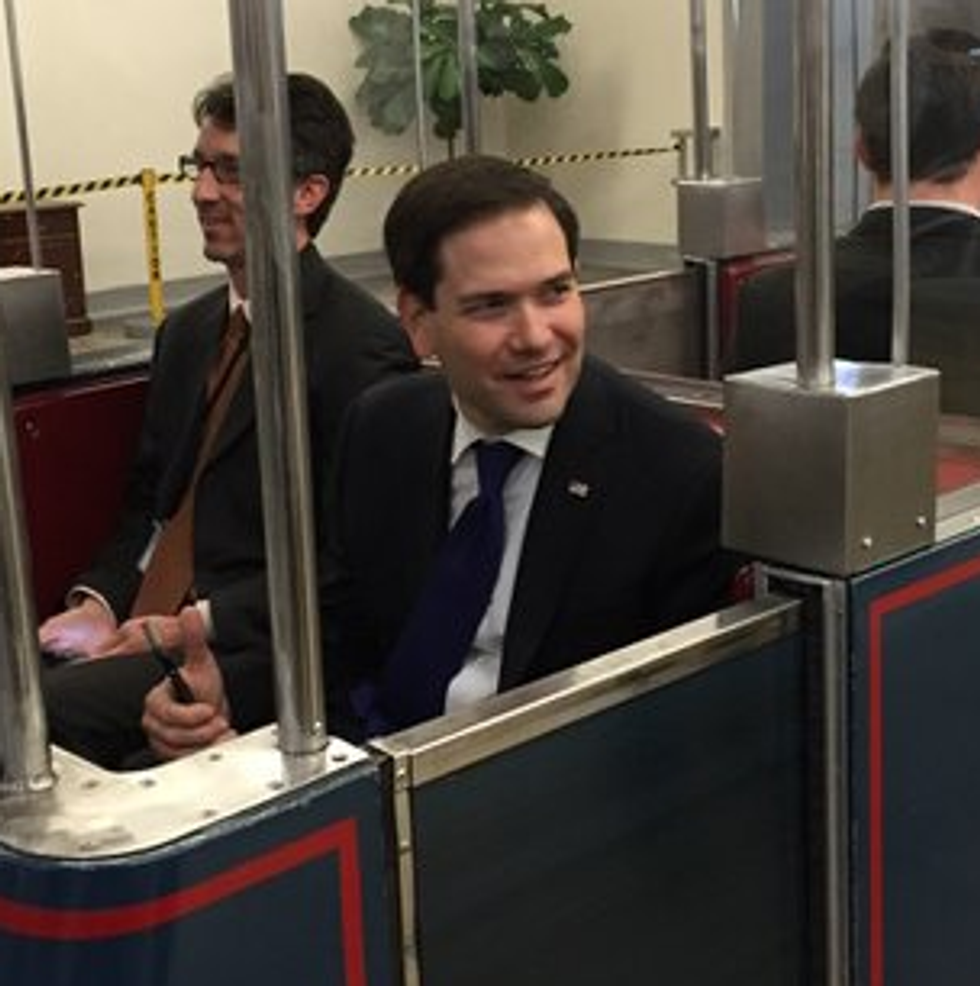 He'll take them home with him in his little Senate choo-choo car.

"WHAT?!" That is what you are saying right now, because you are confused as to why we are talking about "Marco Rubio" and his "delegates" since he unceremoniously dropped out of the 2016 race, after failing so hard he lost his own state like a giant loser. But Rubio loves the minuscule number of delegates he winned SO MUCH, and he wants to take them back to Florida with him, so he can kiss them and love them and hug them and squeeze them and call them "George." (IN A SEX WAY.)

Little Marco has sent a letter to the chair of the Alaska Republican Party, saying that even though he's an also-ran loser, may he please have whatever Alaska delegates he got, at least for a little bit? He also CCed it to Reince Priebus over at the RNC, so Reince could email forward it to everybody, we guess.

That's just a really good letter, but WAIT A MINUTE! How did he just spell America's name? We cannot even. We knew he was shitty at mathing -- hence why things have turned out how they have for him, ahem! -- and not super strong with his alphabetting, but we did not know he is SO bad, he does not even know how is our nation's given name spelled.

On the other hand, maybe he drank too many sippy cups of mojito while he was listening to his techno, and before he knew it he was dangling his body off the side of the bed backward, banging out misspelled sexts to half the GOP establishment.

Because it's not just Alaska, where he's begging everybody to let all his delegate(s) stay with him. It's the other places too!

Rubio aide Alex Burgos told MSNBC that while the Florida senator is "no longer a candidate," he "wants to give voters a chance to stop Trump."

When presidential candidates suspend their campaigns, typically their delegates become free to support the candidate of their own choosing at the convention. Rubio, however, has quietly been reaching out to party officials with a different approach.

He is personally asking state parties in 21 states and territories to refrain from releasing any of the 172 delegates he won while campaigning this year, MSNBC has learned.

And OOH! There is exciting news! The Alaska GOP chair said sure, you can have ALL FIVE DELEGATES YOU WON HERE:

OK, Little Marco, here are your five delegates in Alaska. They are named Moosegiblet, Skittles, Beeftip, Freckle and Snowshoe, and as long as you have them home by dinnertime, or at least the second ballot at the Republican National Convention, you're free to fiddle around with them all you want.

So this is a super plan. But will it work? Even if he gets to keep ALL his million-leventy delegates for just a bit longer, will he be able to use them to #StopTrump?

Even if successful, Rubio's delegate plan would not give him any individual leverage to play "kingmaker" at a contested convention.

Oh. So Rubio is not really going to gain anything from this, aside from one more Barbie dress-up playdate with his pals before they cross the river Styx into hell.

Let's recap where we are: The remaining Republican candidates have backed out of their pledges to support the eventual GOP nominee (named Trump). Ted Cruz has a winning plan to cinch the nomination by winning all the rest of the everybodys (AS IF). And John Kasich knows he can win in a contested convention, if only he can get everybody to ignore how "mathematically" everything is all the time.

And in the end, Donald Trump will still be crowned boy king of the cousin-humping GOP, whether Little Marco likes it or not. Holy elephant-humpin' Christ, what a shitshow.